After bottoming out after the Labor Day holiday, Treasury yields rose later in the week on a combination of equity market strength, optimism on renewal of trade talks with China, and a fairly strong Employment report.  The 10-year yield closed 6 basis points higher to end the week at 1.56%, while the 2-year rose by just under 4 bps, leaving the 2-10 spread at +2 bps.  Despite last week’s move (as well as this morning’s continued upward push in rates), the Fed Funds futures market suggests that a Fed rate cut is fully priced in for the 9/18 meeting.  This is meaningful because money market rates remain significantly higher than Treasury yields, as highlighted by the chart below, and is one of the factors that has pushed TBA carry lower (and many rolls into negative territory).  It’s likely that more cuts in the Fed Funds target rate will serve to pressure money market rates lower. 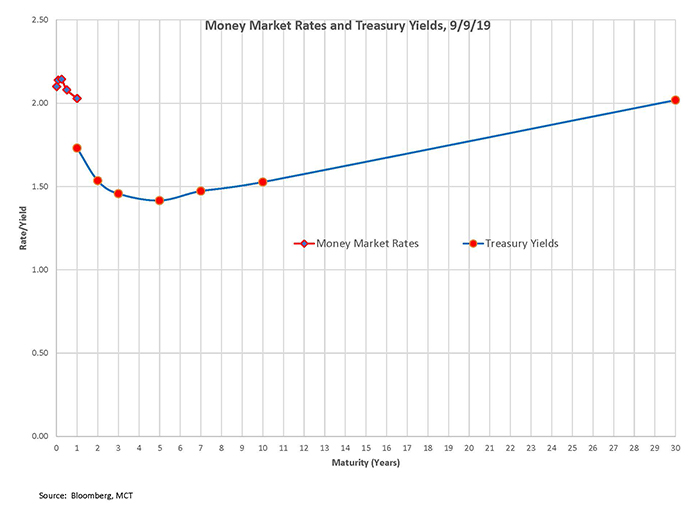 MBS had a strong week, as the 30-year Fannie current coupon spread tightened by 7 basis points.  Measured by duration-neutral performance versus the 10-year, in fact, MBS have performed quite well since late August, as indicated by the accompanying chart.  It shows the cumulative daily duration-neutral performance of UM30 3s versus the 10-year note since the beginning of July.   The chart shows that after peaking in late July, the cumulative relative performance of conventional 3s bottomed out at more than -1 point by August 26th; since then, however, it has bounced back by about 3/8 of a point. 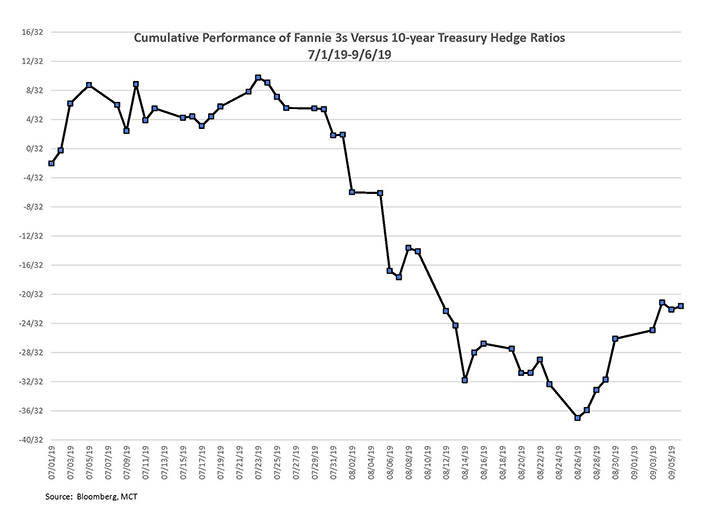 Trading volumes in UM30 2.5s has picked up significantly, as shown in the chart below, with over $25 billion of activity in the coupon on Friday.  While it constitutes a relatively small share (between 7-10%) of 30-year conventional activity, trading volumes in the coupon have increased significantly since mid-August.  The coupon’s rolls, which breaks even at around 1/64th, are trading fairly special, which is typically the case when trading volumes in a coupon increase sharply over a short period of time.  (UM30 3s are the most actively traded coupon, constituting 40-50% of conventional volumes over the last few weeks; its Sep/Oct roll is currently trading around a plus special.) 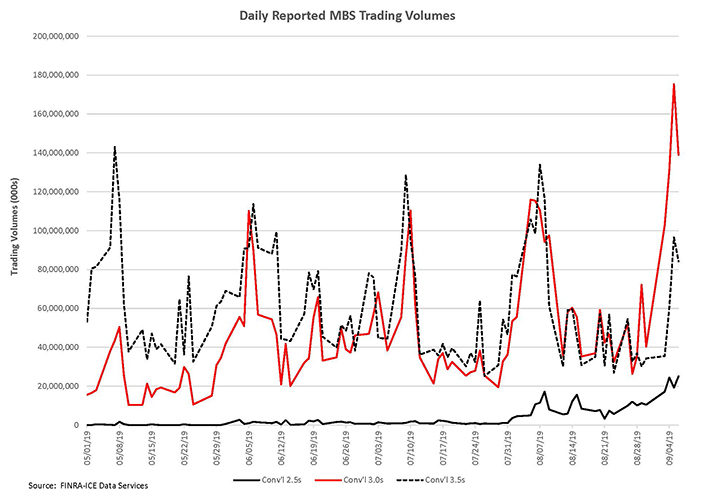 While rolls for UM30 3.5s and higher remain in negative territory, a number of Ginnie II rolls are trading special.  Most notably, the Sep/Oct GNII 2.5 roll is almost 7/32nds special, which is not surprising given the illiquidity in the coupon.  However, the Ginnie II 3% and 3.5% rolls are also trading in excess of their economic value, largely because they are also fairly illiquid relative to conventionals.  (Since the beginning of August, for example, the average daily volume for Ginnie 3s is around $16 billion versus $72 billion for conventional 3s.)  Despite the higher carry cost, we don’t recommend switching government hedges to UM30 TBAs at this time.  However, traders should watch the roll markets carefully and consider pushing their Ginnie TBAs shorts to the back months if the GNII 3% and 3.5% Sep/Oct rolls start to heat up.