Treasury rates dropped last week, reversing the previous week’s selloff and pushing yields significantly lower.  The 10-year yield ended Friday at 1.723%, dropping by about 17 basis points on the week, although it remains well above the 1.46% level last seen immediately after the Labor Day holiday.  The Treasury yield curve (2-10s) flattened by about 6 basis points to just inside +4 basis points, while the 2-5 spread further inverted to -8.5 basis points.  The continued volatility of the market was reflected in the 40-day trailing daily standard deviation of the 5- and 10-year Treasury notes, which reached 6 basis points by Friday, its higher level since mid-2015.

The Fed cut its funding target range by 25 basis points at last week’s Open Market Committee (OMC) meeting but left significant ambiguity with respect to future policy.  One interesting and unusual development was that three OMC members dissented, with two voting to leave the target range unchanged at 2-2.25% while one pushed for a more aggressive 50 basis point rate cut.  The Fed Funds futures market continues to project another cut in rates by the end of the year.  The display below shows that as of 9/23 the market is projecting a 75% probability of another cut in the target rate by the December 11th OMC meeting.  The Fed was also in the news actively intervening in the money markets, adding reserves to the system to address funding and reserve shortages that caused some rates (including SOFR, the government’s preferred replacement for LIBOR) to spike higher mid-week.  (To highlight some of the volatility in money markets, SOFR went from closing at 2.20% on 9/13 to 5.25% on Tuesday before ending the week at 1.86%.)

MBS performance was fairly muted despite the continued volatility.  The 30-year current coupon spread over interpolated Treasuries ended the week at +98 basis points, three basis points tighter on the week.  Ginnie rolls continue to confound traders, as both the Ginnie II 2.5% and 3% Sep/Oct rolls went out quite special on September’s Class C notification; in particular, the 2.5% roll was marked at over 9+ ticks on notification day, and some trades supposedly took place around 11/32s.  (The 3% roll was not quite as stretched, but it still went out over 4/32s, roughly 3 ticks special.)  The GNII 2.5% Oct/Nov roll remains heated at a current drop of around 6 3/8 ticks, while the UM30 2.5% roll is also trading around two ticks special.  (Based on conversations with several clients, we have added average weekly trading volumes by coupon, sourced from ICE Data Services, to the second page of the Market Profile report; this should help traders gauge the potential liquidity of different coupons and products.)

Coupon swaps were again under pressure, with the UM30 and GNII 3.5/3 swaps contracting by about 12 and 10 ticks, respectively.  Ginnie II/Fannie swaps were mixed, with lower coupons ending the week little changed while 4% and higher deteriorated by about 4/32s.

A review of MCT’s client database shows that the collective 30-year conventional and government pipelines have weighted average note rates of 3.86% and 3.72%, respectively.  The accompanying chart, however, indicates that the loans in both pipelines have fairly dispersed note rates.  For example, the 30-year conventional pipelines contain significant volumes of loans (shown as a percentage of total locks) with rates ranging from 3.375% to 4.125%; in addition, while around 22% of the 30-year government pipelines have note rates of 3.25% and 3.375% there is also a significant share of loans (about 9%) carrying 4.125% rates. 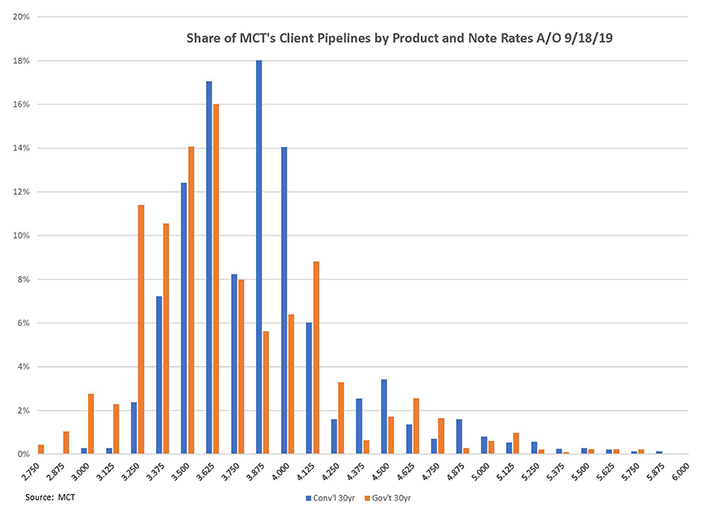 September volume estimates also reflect the summer’s bond market rally and subsequent uptick in the production of 2.5% MBS, at least in conventionals.  The table below shows actual September month-to-date issuance (through 9/20/19) for 30-year Fannies and Ginnie IIs as reported by eMBS.  The table indicates that Fannie/UM30 2.5s currently comprise about 16% of September issuance, with 3s making up just under 60% of 30-year conventional MBS production.  Interestingly, applying what we think is generally utilized best execution to the loans in MCT’s overall conventional client pipelines suggests that issuance of 2.5s and 3s should be relatively greater, together comprise around 86% of total conventional production versus the 74% or so indicated by the eMBS report.  (The difference between MCT’s and eMBS’ data reflects roughly 10% less production of 3.5s.)  The difference is probably the result of different coupon slotting assumptions and methodologies actually being utilized by issuers versus our assumption that “pooling down” into the lowest possible coupon almost always represents current best execution. 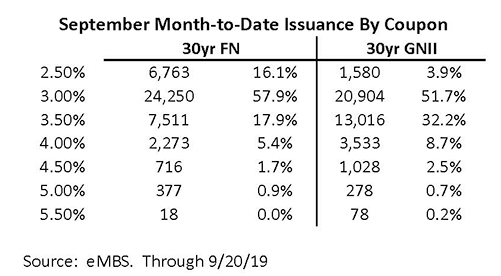