The Treasury market meandered around last week, although the week/week changes belied some noteworthy mid-week price volatility.  The 10-year note ended the week yielding 2.07%, only about 1.5 basis point higher than its 7/19 close, but the note’s yield ranged from a low of 2.045% to a peak of 2.082%.  The yield on the 2-year note was somewhat steadier, although it popped by about 5 basis points on Thursday, leaving the 2-10 year spread just under 2 basis points flatter at +21.7 bps.

The accompanying chart shows that the realized volatility of intermediate Treasury yields has trended higher for almost a year, with the 40-day standard deviation of the 5-year note approaching the 4.8 basis point peak last experienced in late 2018/early 2019. 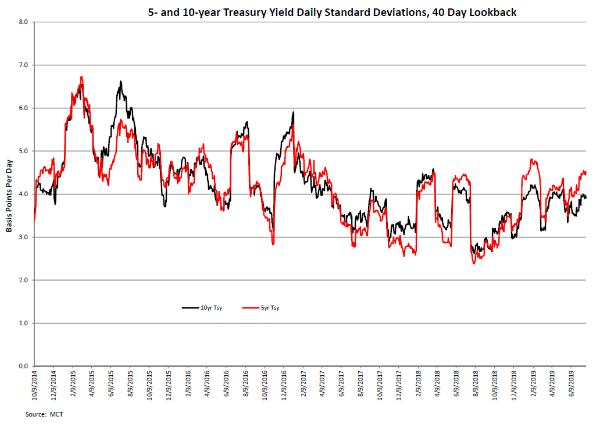 Click to Enlarge  Mortgage spreads barely budged last week.  The 30-year Fannie current coupon spread over interpolated Treasuries ended the week a basis point tighter at +85 bps, while the 15-year Fannie and 30-year Ginnie II spreads were modestly wider.  Most MBS prices changed over the week within a couple of ticks of their Treasury hedge ratios; a notable exception was GNII 4s, where the front-month (August) TBA outperformed the 10-year note by a quarter-point.  The swing in GNII 4s left the GNII 4.5/4 swap wider by 9/32s and the GNII/Fannie swap widened by 6 ticks to close at +15/32s.

Some technical discomfort in the Ginnie market was also reflected in August/September rolls.  The GNII 4 roll, which spiked to over 7/32s prior to July notification, expanded by over 3/32s last week, and is now at least 2+ ticks special using 10% CPR (and more if a faster speed is assumed).  Other Ginnie rolls also are being pressured higher; for example, the GNII 3 roll is trading at least 3/32s special.  It’s important that traders using Ginnie II TBAs as a hedging vehicle monitor their roll positions closely (or assign as many trades as possible).

One interesting and important development in the market is how the assumptions for TBA deliveries changed as the market rallied and mortgage rates dropped.  This is especially true for premium coupons, with Fannie 4s being an excellent example.  The rally in bond prices, which took the 10-year Treasury yield about 60 basis points lower since mid-April, has caused payups for specified pools to expand dramatically, with the biggest boost seen in fuller coupons where the prepayment protection is most valued.  For example, the payup for 110K max balance Fannie 4s has expanded from around 1 ¾ points in mid-April to around 3 points today, while the Fannie 3 payup has increased by about 10/32s.  The expansion of premium payups means that it’s highly likely that loans with “specified” characteristics will be pooled and sold separately and not delivered into TBA trades, making the TBA cohort “adversely selected.”  (This is the MBS market equivalent of showing up at a yard sale on the last day, when all the merchandise has been picked over.)

This means that the delivery assumptions (or, as designated by Bloomberg, the “worst to deliver” or W2D) for TBAs differs significantly from the population of pools recently issued.  This in turn means that the analytics for the two cohorts, such as the option-adjusted spreads and durations, can be materially different depending on what cohort is being assumed, especially for fuller coupons at higher dollar prices.  As an example, the two screenshots below show Bloomberg analytics for August-delivery TBA Fannie 4s (denoted as “FNCL 4 8/19”) and new-production Fannie 4s (“FNCL 4 N”). 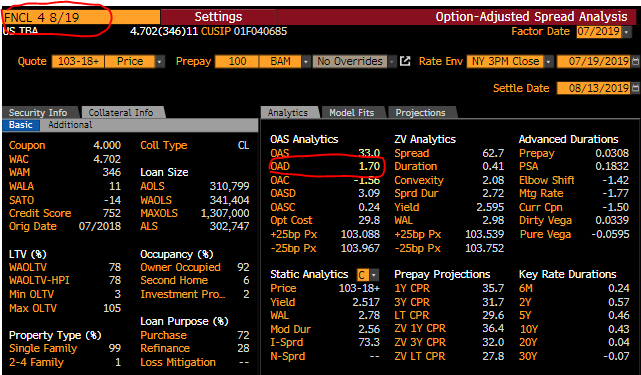 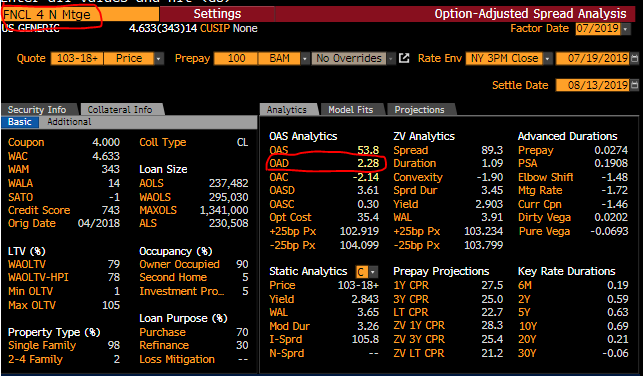 Click to Enlarge Since the TBA delivery cohort is assumed to be adversely selected, with virtually all pools that can trade to a payup removed, the OAS is much lower and, importantly to hedgers, the option-adjusted duration for the W2D is significantly shorter (i.e., around 1.7 versus 2.3).  The effect is not as pronounced for coupons closer to par, since payups are lower for coupons such as Fannie 3s and it is assumed that fewer pools will be sold specified.  (The different assumptions don’t impact the analytics as noticeably when the dollar prices are closer to par).  Nonetheless, traders should be aware of the differences between the new-prod and W2D cohorts and how they impact analytics, especially for higher-rate MBS positions and loan pipelines.