Overall MBS spreads were roughly unchanged on the week, with the Fannie current coupon spread over interpolated Treasuries declining by less than a basis point.  Duration-adjusted performance was biased in favor of lower coupons, especially in the Ginnie sector, where Ginnie II 3s and 3.5s outperformed their 10-year hedge ratios by 7 and 6 ticks on the week, while fuller coupons such as GNII 4s and 4.5s lagged by 2/32s and 5/32s, respectively.  Thursday’s Class C notification saw the GNII 4 roll spike to just under a quarter-point, perking up after Class A notification on July 11th, as shown in the chart below. 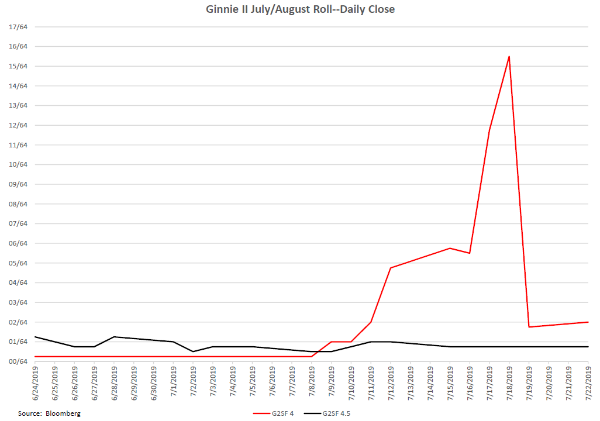 Click to Enlarge Coupon swaps were compressed by the strong performance of lower coupons, while GinnieII/Fannie swaps were mixed; the 3% and 3.5% widened by 3-5 ticks while the 4.5% swap deteriorated by almost a quarter point.

The Freddie Mac survey rate reported at 3.81% last week, while the MBA’s refi index printed at 1827, a 1.5% gain over the prior week’s report (which arguably was distorted by the Independence Day holiday).  The accompanying scatterchart, which compares the refi index to the Freddie Mac survey rate since early 2015, indicates that while the index at a sub-2000 level is not yet indicating a “refi wave,” it suggests that refi activity (as indicated by the red box) is in line with its recent history at the current level of 30-year mortgage rates.  It’s noteworthy that the last time the survey rate was in the 3.75% neighborhood rates were rising rapidly after the election; the last time rates were trending lower to the 3.75% area (the week of 2/4/16) the index was coincidentally also at 1827. 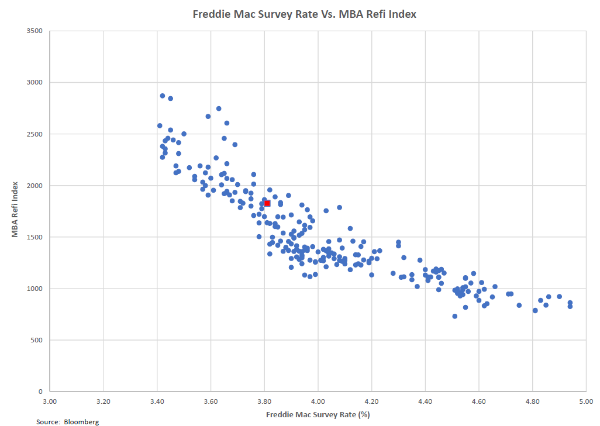 Click to Enlarge One other interesting development is the relatively high level of ARM rates, at least for the average rate reported by vendors such as Bankrate.com.  The accompanying chart indicates that the reported national average 7/1 ARM rate is currently about 14 basis points higher than the 30-year fixed rate.  This is quite unusual; the two rates were inverted during the financial crisis as well as briefly in 2012, when fixed rates plunged once the Fed began buying large amounts of fixed-rate MBS. 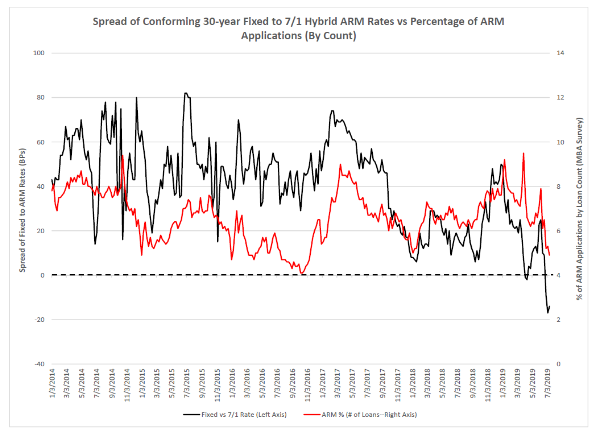