Treasury yields mostly rose last week, although the front end of the yield curve rallied modestly after fairly dovish testimony from Fed Chairman Powell.  While the 10-year yield rose by almost 9 basis points to close the week at 2.12%, the yield on the 2-year note actually declined by 1.5 bps.  This left the 2-10 year spread wide by 10 basis points week/week after moving inside +16 bps last Tuesday, before a selloff in the intermediate and long end of the curve later in the week.

MBS performance ended the week on a decidedly mixed note.  While the 30-year Fannie current coupon spread over Treasuries widened by 6 bps, the cumulative (5 day) duration-adjusted performance of Fannie and Ginnie II 3.5s and higher was strong, ranging from +3/32s (for Fannie 3.5s) to +9/32s for Fannie 4.5s.  Lower 30-year coupons struggled, however, as Fannie and Ginnie II 3s trailed the 10-year note by 4 and 7 ticks, respectively.  Not surprisingly, a number of coupon swaps moved sharply wider—the Fannie 3.5/3 swap expanded by 10/32s, while the GNII 4/3.5 swap widened by almost a quarter-point.  Class A notification came and went without any noticeable dislocations, with no repeat of the June spike in the conventional 3% roll.  (The Fannie 3 roll in June spiked to 7+ ticks on notification day in June, reflecting a short squeeze in the coupon.)

In fact, dollar rolls remain at multi-year lows, reflecting the poor carry obtainable for MBS in the current environment.  In fact, the Fannie 4 and 4.5 rolls are both trading at negative drops, which suggests that it costs investors money to hold MBS as an investment, a condition normally seen only in commodities markets.  (For example, holding physical commodities such as oil incurs storage costs but doesn’t garner interest or dividend payments, so prices on forward contracts normally rise for future settlement, a condition known as contango.)  Weak rolls have impacted the strategies of both investors and originators, making buy-and-hold strategies less effective while hedging becomes cheaper.
There are several factors weighing on dollar roll levels:

All three of these factors stem from the current unusual state of the money and fixed income markets, where money market rates (such as 1-month LIBOR) are substantially higher than intermediate Treasury yields.  (At this writing, assumed funding costs are around 2.5%, while the US 10-year note yields less than 2.10%.)  The relatively low level of intermediate rates means both MBS prices for most coupons are significantly over par and prepayment speeds are expected to increase.  This means that investors holding MBS over month-end are accepting greater unscheduled principal payments which in turn have an increased cost as dollar prices rise.  (For example, when Fannie 3.5s were trading around par in March of this year increased prepayment speeds didn’t significantly impact carry and thus roll levels, since the cost of accepting greater principal payments was minimal.  However, a 15% CPR assumption when the coupon is trading at 102 means that the investor holding MBS pools is accepting a 2-point loss on about 1.5% of the principal value of the position every month.  This assumption is reflected in roll prices, since TBAs serve as a derivative alternative to actually holding the securities.)

The other factor, which is even more significant, is that elevated funding costs (resulting from relatively high money market rates) eat into investors’ carry.  Taken together, these factors limit the economic benefit of either holding MBS pools or buying and rolling TBAs.

The interaction between these factors can be seen in the accompanying tables, which show break-even (i.e., economic) roll values for Fannie 3.5s at different price levels given varying funding and prepayment assumptions.  The tables suggest that the biggest factor in capping roll levels is the current high cost of funding; with Fannie 3.5s over 102 every 50 basis point increase in funding costs results in over a tick drop in the break-even roll level.   Combined with expensive funding, the higher dollar prices and faster prepayment assumptions for Fannie 4s and 4.5s in turn have pushed their roll break-evens below zero.

The low level of rolls, reflecting the poor carry available for the MBS product, probably won’t reverse unless and until the Fed substantial cuts the funding target rate later this month and in the fall. This will hopefully push money-market rates down to more normal levels relative to Treasury yields. 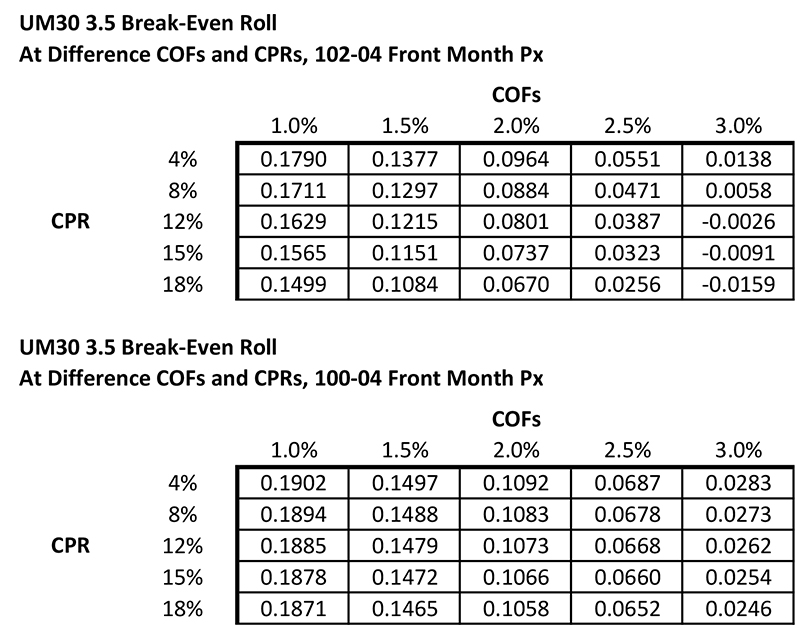