Treasury yields continued to push lower last week, with the 10-year yield ending the week at 2.083% after renewed concerns over trade spats and a weak Employment report.

The 2-year note was the best performer on the Treasury yield curve, as its yield declined by over 7 basis points on the week, leaving the 2-5 sector virtually flat and the 2-10 year 3 basis points wider at +23 basis points.  Even more astonishing were the closing yields on foreign debt; the German 10-year ended the week at -26 basis points, 6 basis points lower on the week.  The Fed Funds futures market now projects an 80% probability of a rate cut by the Fed at the 7/31 meeting, based on the weakening economic fundamentals and dovish comments from Fed officials.

Despite the rally, the MBS sector put in a decent performance.  All major current coupon spreads over Treasuries closed tighter on the week, although these measures can be quite misleading, as the 30-year Fannie and Ginnie II current coupons both use the unreliable 2.5% coupon as an input in the calculations.  (Basically, the current coupon rate is an interpolation of the coupon above and below the “parity” price, or the par value taking factors including the delay days into account.)  Most 30-year coupons had a cumulative duration-adjusted performance pretty much in line with their 10-year hedge ratios, and lower coupons (3s through 4s) managed to outperform the 5-year Treasury, duration-neutral.  Coupon swaps were mostly steady, although the Fannie 4/3.5 swap lost about 3/32s to close at 1 5/32s.

Another milestone in the transition to the Common Securitization Platform (i.e., the Single Security initiative) was reached last Monday, as the first UMBS pools were actually issued.  It’s noteworthy, however, that TRACE data indicates that Freddie Mac Gold TBAs and securities continue to trade.  As noted in an earlier report, many market participants expected Gold trading to die off fairly quickly, as it was unclear that any dealers were going to make markets in the TBA contracts and product once the SSI transition took place and Gold pools could be exchanged into deliverable pools.  It was surprising to see that almost $6 billion in Gold TBAs traded for June and July settlement on Friday.

(Another $4.7 billion in Freddie pools changed hands on Friday, which is assumed to include both legacy Golds and exchanged mirror pools, although FINRA’s reports are not entirely clear on their classifications.)  The continued trading in Golds may reflect the expansion of the Gold/Fannie swaps to levels exceeded the economic value of Golds’ shorter delay; while there’s no “backward exchange” (i.e., exchanging mirror pools for legacy Golds) there may nonetheless be some advantage to trading or holding Golds instead of the mirror pools.

One other development that (despite being irrelevant to the proceedings) was discussed at the Single Security Initiative in March was the relative increase in Gross WACs of conventional pools.  This is clearly evident from examining the WACs of pools issued during three-month periods over the last two years.  The accompanying table shows WACs calculated for Fannie 3.5% and 4% pools issued during the March-May periods in 2018 and 2019. 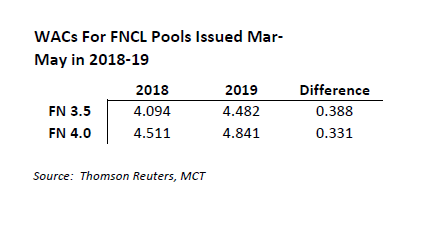 Click to Enlarge The WACs for pools issued this year are 39 and 33 basis points higher, respectively, a development that has clear implications for the prepayment performance of the different vintages.  The expansion in WACs reflects the better economics of “pooling down” into the lowest possible coupon when calculating best execution, leaving the differential between WACs and coupon rates at their widest levels in memory.