Intermediate and long-maturity Treasuries continued to rally last week, leaving the yield on the 10-year right at the 2% mark. The rally mainly benefitted maturities longer than seven years, as the 2-year yield only declined by a basis point (versus 5 bps on 10s) which left the 2-10 year spread at +25 bps. The rally incorporated both a lower TIPS break-even inflation rate (with the 10-year B/E ending the week at 1.7%, about 3.5 bps lower) while the TIPS yield itself (a proxy for a “real” 10-year rate) declined by about 2 bps to 0.30%.

Mortgage spreads and price performance lagged last week.  The 30-year Fannie Mae current coupon spread over Treasuries widened by about 4 bps, while lower Fannie coupons (i.e., 3s and 3.5s) lagged the 10-year on a duration-adjusted basis by about 4/32s.  30-year Ginnie IIs had a more varied performance; while 3s lagged the 10-year by 4/32s, 3.5s managed to track the 10-year.  Coupon and product swaps were little changed.  The Fannie (UM30) 3.5/3 swap narrowed by about 2/32s, while the 4/3.5 swap widened by a tick; the biggest mover in GNII/FN swaps was in 3.5s, which widened by 3/32s.

Dollar rolls ended the week mixed, with several notable developments.  Both UM30 and GNII 3% July/August rolls closed special, with the GNII 3% roll (at over 4/32s special) showing signs of blowing out prior to July notification on 7/18.  Fannie 3s and GNII 3.5s are both rolling about 1+ special, while a number of fuller coupon rolls (e.g., Fannie 4s and higher) closed the week in negative territory.  As discussed last week, negative rolls reflect their high dollar prices, fast expected prepayment speeds, and high money market rates, which remain well above short-term Treasury yields.

The MBA’s refi index rose by 3% for the week ending 6/21 to close at 1949, a solid number but still well below what is considered a “refi wave.”  (The index’s recent peak was at 2843 in July of 2016, during the post-Brexit rally.)  While the increase in refinancing applications reflected declining mortgage rates, it’s unclear where mortgage rates have actually been quoted through much of June.  For example, there has been a fairly noticeable discrepancy between the two major 30-year conventional indicators, the Bankrate.com national average conventional rate and the Freddie Mac survey rate.  As indicated by the accompanying chart, the weekly Freddie rate has been as much as 18 basis points lower than the Bankrate average since Memorial Day of this year.  (By contrast, the Bankrate average was significantly lower than the Freddie survey rate for much of 2018.) 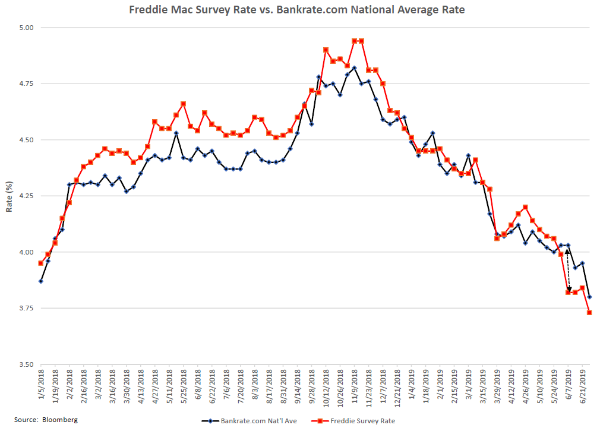 Click to Enlarge The collective MCT pipelines offer some insights into the question of where 30-year conventional locks are actually being taken.  The weighted average note rate associated with locks taken over the last 15 days of June was 4.07% for 30-year conventionals (and 3.93% for 30-year government loans).  In addition, the chart below gives an interesting picture of recent lock activity for MCT’s clients.   A large portion of 30-year conventional locks added to the pipeline over the last 15 days have had 3.875% and 4% rates, with a smattering of loans at both lower and higher rate levels.  This suggests that the higher Bankrate indicators have probably been more representative of the market than the Freddie rate; this in turn may indicate that the recent decline in the Bankrate average may portend a broad uptick in refi activity and the MBA application indices. 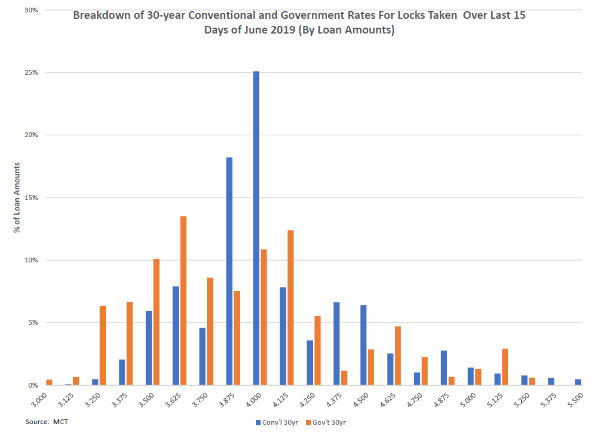 Click to Enlarge Interestingly, the graph also indicates that the 30-year government locks in MCT’s client pipelines display a broader dispersion of rates; for example, less than half of the balances of loans in client pipelines have rates between 3.75% and 4.25%.  If this is representative of the overall government market, the large amount of recent locks with low note rates (e.g., between 3.5% and 3.75%) is being reflected in the specialness of the GNII 3 July/August roll, where hedging and selling activity is pushing down the back-month price and expanding the roll’s price.

We will skip next week’s commentary due to the holiday-shortened week; wishing a Happy Independence Day holiday to all clients, readers and friends.