Bonds continued their rally last week, although the 10-year failed at an initial attempt to break through 2%, closing at 2.056%.  The rally was triggered by dovish statements from the Fed’s Open Market Committee that led traders to conclude that a rate cut is almost certain at the 7/31 meeting.  (The Fed Funds futures market currently projects at least two rate cuts this year.)  The Treasury yield curve (2-10s) ended the week steeper by about 6 basis points, while the 2-5 spread widened by 3 bps to close at +2 bps.  Overseas rates also followed Treasuries lower, with the German 10-year ending the week at -0.29%.

The MBS sector put in a mixed performance last week.  The current coupon spread over Treasuries closed tighter by about 11 basis points (versus interpolated 5-10 Treasury yields), although that spread continues to be distorted by the pricing of illiquid Fannie 2.5s.  (The average daily trading volumes in June for Fannie 2.5s has been $1.3 billion versus $33b and $45b for Fannie 3s and 3.5s, respectively.)  On a duration-adjusted basis versus the 10-year Treasury, Fannie 3s and 3.5s cumulatively outperformed by about 8/32s and 4/32s on the week, while Ginnie II 3s outperformed 10s by over 3/8ths of a point and fuller coupons beat the Treasury by a few ticks.  The MBA application indices moderated a bit last week, with the refi index reporting about 3.5% lower at a still-solid 1889.

Despite last week’s decent cumulative performance, MBS dollar rolls reflect some technical distortions in the market.  For example, Fannie 3s are rolling almost 2 ticks better than their break-even levels, while fuller coupons (including Fannie 4s and 4.5s) are actually rolling at negative drops.  The special in Fannie 3s reflects imbalances between front-month demand and back-month supply, while negative rolls reflect a combination of high dollar prices, expectations for fast speeds (reflecting the pop in refi applications), and relatively high money-market rates.  For perspective, the underlying chart shows the unusual negative spread between 1-month LIBOR and the 2-year Treasury yield. 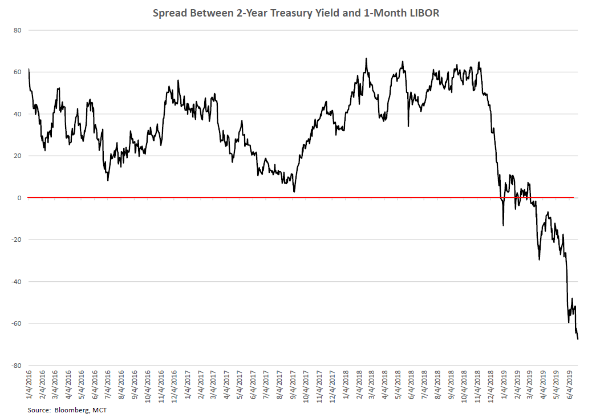 Click to Enlarge After being solidly positive for most of the past two years, the spread turned negative in March of this year; since May, the Treasury yield has continued to decline while LIBOR has been pinned at around 2.40-2.45%.  This highlights the stubbornly high level of money market rates despite the universal expectations for multiple Fed rate cuts this year; in addition to depressed roll values, high funding costs also eat into the profitability of non-bank originators and MBS investors.  That said, it’s likely that funding rates will decline late this summer or in the fall once the Fed actually carries through on cuts to the Fed Funds target rate.

Many clients have also questioned how investor pricing will evolve in the face of the sustained drop in mortgage rates or, more to the point, how closely loan pricing will reflect improvements in TBA prices.  Assessing the pricing tactics and relative aggressiveness of investors is difficult, for several reasons.  One is that securitizers are increasingly “pooling down,” where the TBA coupons into which loans are being pooled are low relative to loans’ note rates.  (This has resulted in the expansion of recent cohorts’ WAC spreads, i.e., the spread between pool WACs and coupon rates, discussed in a previous commentary.)  Another difficulty results from the gravitation of loan trading toward bid tape execution, making pricing derived from so-called mandatory adjuster grids (MAGs) less applicable.  That said, a look at loan prices derived from MAGs suggests that pricing strategies differ across aggregators; some lenders have continued to improve their grids in a pattern consistent with TBA prices, while others are fading their pricing as the market rallies.

There are also some interesting changes in agency cash prices.  The chart below shows TBA 3.5% prices versus daily quoted prices for generic loans from Fannie Mae for two note rates (4% and 4.125%) that are somewhat higher than current rates but prevalent in lenders’ pipelines. 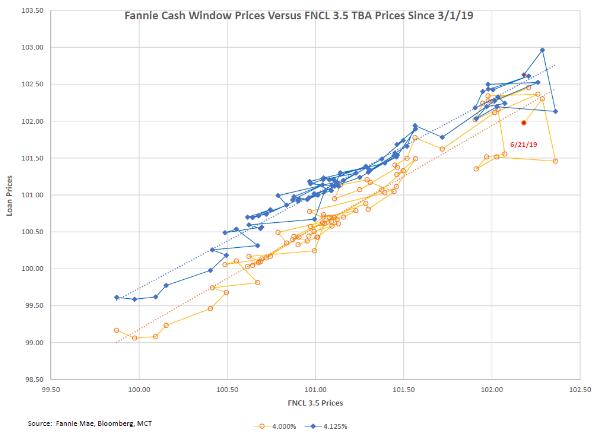 Click to Enlarge The chart suggests that Fannie recently weakened their pricing for both note rates (although pricing improved for the last couple of sessions), while the pricing for 4%s loans was more noticeably pressured.  (The dots with red fill reflect levels from last Friday.)  Among other things, this suggests that rather than improve or fade all prices investors will become increasingly tactical in their quoted prices, as they attempt to buy loans that fit short-term objectives rather than changing their overall pricing strategies.