Treasury yields did not change much last week, despite some volatility that briefly took the 10-year yield to 2.15% before closing at 2.08%. The yield curve configuration was also little changed, with the 2-10 year spread moving out by about ½ basis point while 2-5s inverted by a basis point and the 5-30 spread widened by about 3 bps.  The TIPS (inflation-protected) break-even rates, which serve as proxies for expected inflation, declined noticeably last week, with the 5-year break-even contracting by 14 basis points despite a slight uptick in the CPI.

The mortgage-backed securities market struggled last week, as both the primary and secondary markets finally responded to the dramatic downtick in rates.  UMBS 30-years closed lower by as much as 9/32s, which resulted in a week/week widening of the current coupon spread (over interpolated Treasuries) by around 12 basis points.  Ginnie IIs had a better week, although the current coupon still widened by about 4 bps to Treasuries.  Coupon swaps were mixed, while Ginnie II/UM30 swaps improved by 4-6 ticks.  The push to sub-4% consumer rates has finally been reflected in application volumes; the MBA’s refi index spiked by almost 47% last week (to 1957, the highest level since November 2016) while the composite index (including both purchase and refi applications) increased by 27%.
The Fannie 3 roll for June spiked to over 7/32s prior to Tuesday’s Class A notification, reflecting technical and timing differences between the sale of pipeline loans and the SIFMA calendar.  This week, the GNII 3 roll is also creeping higher, ending the week almost 4/32nds special.  Rolls for a particular coupon can trade erratically when production shifts, and the push lower in rates is creating a lot of back-month selling in conventional and government 3%s that, along with the need to cover June shorts, has pushed the rolls wider.

In addition to reducing expected pipeline pullthrough rates, traders have also had to adjust to declining MBS durations due to expected increases in prepayment speeds.  The accompanying table shows the hedge ratios relative to the 10-year Treasury for Fannie (i.e., UM30) 3s through 4s since early May. 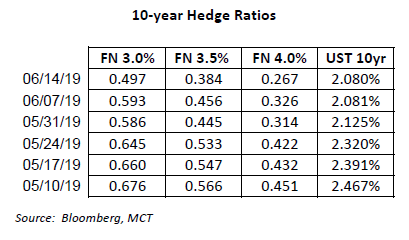 (The hedge ratios reflect the coupons’ dollar durations divided by the dollar duration of the 10-year note.)  The shortening of hedge ratios for Fannie 3.5s and 4s is particular striking, and has implications for both hedging tactics and relative performance calculations.  (For the latter, note that an 8/32nd drop in the price of the 10-year note would have implied a duration-neutral decline of 4+ ticks on Fannie 3.5s on May 10th but only a 3/32nd drop in price on Friday.)

The drop in rates and increase in refinancing activity has also created an increased sensitivity on the part of investors to prepayment exposure, which in turn is reflected in payups for loan attributes (such as pools with smaller loan balances) that historically exhibit less responsiveness to refinancing incentives.  (For example, the pay-up for Fannie 3.5s with maximum loan balances of $150K has increased from around ¾ of a point on May 10th to almost 1 ½ points last Friday.)  One side effect of higher payups is that more such pools are traded in the specified pool market instead of being delivered into TBAs.  This results in the TBA populations being increasingly “adversely selected,” i.e., comprised largely of pools with the least favorable prepayment characteristics.

This in turn means that the durations of TBAs (or, more accurately, the pools that are expected to be delivered against TBAs) has shortened relative to the “new-production” cohort, which is assumed to include all recently-issued pools.   The accompanying display (from Bloomberg’s model) indicates that the duration (i.e. the OAD) of TBA-deliverable Fannie 3.5s is about 14% shorter than that of the entire new-production cohort for the coupon.

(Bloomberg refers to the assumed TBA population as the “worst to deliver” or W2D.)  This means that traders and secondary managers need to identify and specify the applicable cohort for a particular coupon in order to obtain its most meaningful risk metrics.