A lot has changed since our last update in mid-May. The 10-year Treasury yield closed on Friday at 2.125%, 27 basis points lower than its close on 5/17 and more than 110 bps lower than at the cycle highs in early November.

The yield on the 2-year note plunged by 14 basis points on Friday to 1.92%, almost 50 bps lower than the Fed Funds Effective Rate; this pushed the 2-10 year spread back out to +20 and the 2-5 year spread back to -1.  Fed Funds futures have priced in a Fed rate cut as soon as at the upcoming 7/31 meeting; as the table from Bloomberg indicates (image below), the market is projecting more than a 50% probability of an easing in July and a 93% likelihood of a move by October. 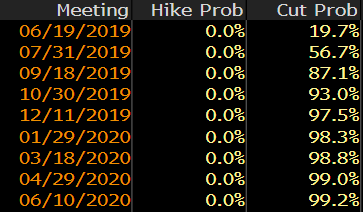 Source: Bloomberg The magnitude of the late-May rally has made MBS performance tough to gauge.  The 30-year Fannie and Ginnie current coupon spreads (over interpolated Treasuries) actually tightened last week, but that was likely distorted by the rally, which pushed the prices of Fannie 3s into the mid-pars.  (This means that the current coupon rate is interpolated from prices for Fannie 3s and 2.5s, not the most liquid or reliable measure.)  The 5-day cumulative under-performance of mid-coupon Fannies and Ginnie IIs versus their 10-year hedge ratios has ranged from around 6-13 ticks, and most coupon swaps weakened by around 10/32s.  Dollar rolls remain fairly weak, pressured by the combination of higher dollar prices and relative high funding rates.

Consumer mortgage rates have declined with the drop in yields, leaving the Freddie Mac Survey rate below 4% for the first time in roughly 1 ½ years.  While anecdotal evidence suggests that refinancing activity has picked up, it has yet to show up in the MBA’s refi index, which remains at tepid (if not depressed) levels.  The accompanying chart will give some context; it shows the refi index along with the Freddie Mac survey rate in reverse scale.  Defining a “refi wave” as sustained prints for the refi index of over 2,000, the chart suggests that while a sub-4% rate will give activity levels a boost, we’re unlikely to see a major spike in refi applications in the current rate regime. 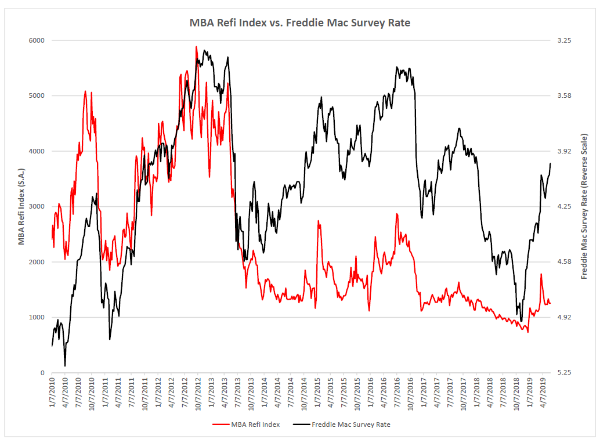 Click to Enlarge The one factor that might actually trigger a refi wave at current rate levels would be if home price appreciation gave significant equity to large numbers of “underwater” homes as well as properties with minimal equity.  With most home price gauges up around 11-12% since early 2017, this is probably unlikely; it depends on whether large numbers of borrowers with relatively high rates were locked out from refinancing during the last Brexit-induced trough in rates during the summer of 2016.

On another note, today (6/3) marks the first day of issuance of conventional MBS under the Single Security (i.e., UMBS) umbrella.  While the transition has been smooth so far, some observers have wondered whether liquidity will be impaired by the conversion.  (See, for example, a Bloomberg story entitled “A $4 Trillion Mortgage Bond Fix Has Some Skeptics on Wall Street;” as one observer noted, “it already was the most liquid market in the world….what are they trying to fix, exactly?”).  The accompanying chart indicates that conventional trading volumes have remained fairly steady while maintaining their cyclical monthly pattern.  (Keep in mind that trading began to transition in March, and the UMBS became the front-month TBAs after May notification.) 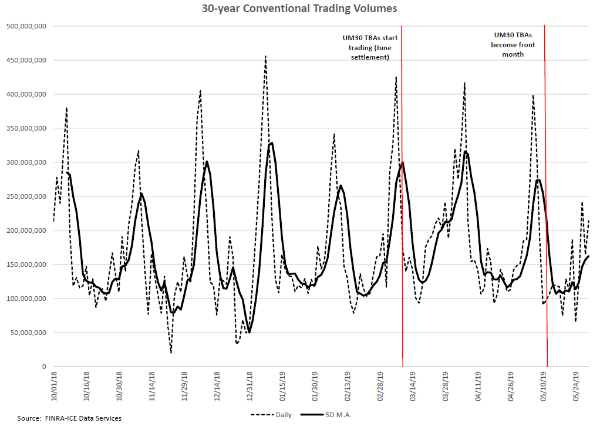 Click to Enlarge While it’s unlikely that market illiquidity will result from prepayment differentials (especially in light of the new FHFA rules issued last spring), an initiative to remove Fannie and Freddie from conservatorship could result in a fragmented TBA market if investors viewed the two entities as having different degrees of creditworthiness.  In this light, the suggestion by the new Director of the FHFA, Mark Calabria, that Freddie and Fannie could be separately withdrawn from conservatorship is risky and ultimately unlikely to occur.