Treasuries rallied nicely last week, pushing yields below key thresholds. The 10-year ended the week just below 2.50%, while the rally took the yield on the 2-year to 2.28%, leaving the 2-10 spread at +21.6, its widest level since late November of last year.

Also noteworthy was the steepening in the short end of the curve, leaving the 2-5 spread in positive territory (by half a basis point) for virtually the first time in 2019. The last month has also seen an uptick in realized Treasury volatility; the standard deviation of the 10-year yield has moved up about 0.8 basis points per day since mid-March. As the chart below suggests, realized Treasury vol has trended higher since it bottomed out last summer. 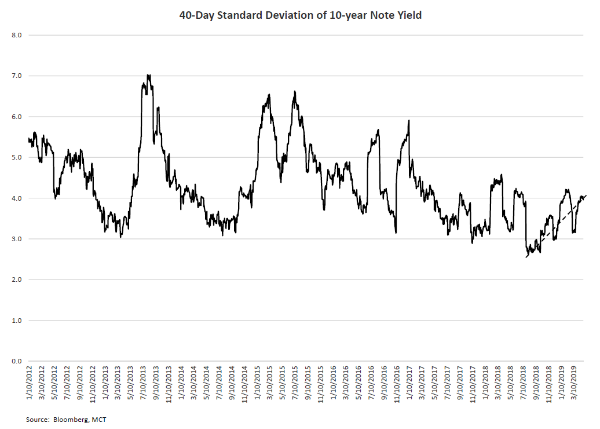 MBS performed reasonably well given the decline in rates, as the 30-year current coupon was unchanged in spread to 5-10 interpolated Treasuries. Coupon swaps compressed a bit, which is expected as yields decline, leaving the Fannie 3.5/3 swap narrower by about 5/32s on the week. Conventional and government 3.0s remain the only coupons with special rolls, with the Fannie 3 May/June roll trading more than 1+ special. That roll is also starting to perk up this week, and at this writing (10:00 PT) offered at 3+ ticks; traders short this TBA for May should be wary of the possibility that it might get quite expensive to roll as May notification approaches. (For example, the April/May roll go to almost 7 ticks on April 5th before selling off on 4/8, which was Class A notification for April.)

A few weeks ago we discussed application activity and whether the 1786 print on the MBA’s refi index (for the week ending 3/29) was an aberration or the sign of a sharp uptick in refi applications. The index has dropped steadily in recent weeks, reporting at 1293 for the week ending 4/19 (the last available report). While mortgage rates have ticked higher, the Freddie Mac survey rate is only 11 basis points off its lows. Moreover, the accompanying scatter chart and regression suggest that activity levels are very much in line with their trend vis-à-vis rates, with the 3/29 index representing a short-term blip in activity. 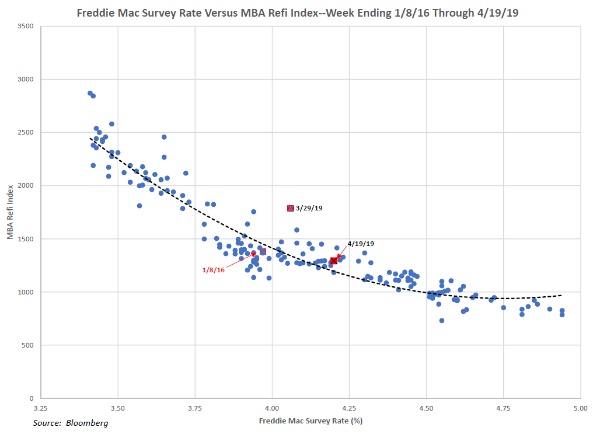 The late March spike in activity was interesting, however, as it was accompanied by a significant pickup in ARM applications. The chart below shows the MBA’s refi and ARM indices since the beginning of 2017. It’s noteworthy that the 3/29 refi spike was accompanied by a big pickup in the ARM index, which reported at its highest level since 2012; in addition, ARMs as a percentage of total apps reached their highest levels since early 2008. The coincidental timing of the spikes in the two indices is curious, and suggests that a short-term promotion was being run by one or more large lenders to market adjustable-rate loan products. Why lenders might undertake this type of initiative is a mystery; it may, for example, be related to a push in non-QM space which showed up in the MBA’s survey data. (The MBA’s methodologies have long been notoriously opaque; for example, we don’t even know what lenders participate in the survey at any point in time.)