Intermediate and long Treasury yields backed up last week to levels last seen in early November. The 10-year Treasury yield ended the week at just below 1.92%, almost 10 basis points higher on the week. While shorter-maturity bills and notes also sold off, their yields only rose by between 2 and 4 basis points, leaving the yield curve significantly steeper; the 2-10 year spread closed at +29, its widest level since June 21st of this year. The long-end selloff was driven both by a rise in real yields (i.e., rates without an inflation component, proxied by the 10-year TIPS yield) and a pickup in long-term expectations for inflation, with the 10-year TIPS break-even rate increasing by 6 basis points to 178 bps, its highest level since late July.

The selloff helped continue the tightening trend for MBS. The Fannie Mae 30-year current coupon spread over Treasuries narrowed by about 3 basis points, and is tighter by about 13 bps from its level in mid-November. Coupon swaps were, surprisingly, mixed last week. 30-year Fannie swaps widened modestly, as you’d expect in the face of a selloff, while Ginnie swaps were mixed, with the 3/2.5 swap expanding by 7/32s while the 3.5/3 swap narrowed by five ticks. Dollar rolls have contracted after December’s settlements were completed, as the Jan/Feb rolls don’t embody the same fear of year-end funding pressures as did the Dec/Jan rolls. The only roll trading notably special is the GNII 3.0 roll, while the GNII 3.5 roll was, at -1 3/8, solidly in negative territory.

One other interesting note is that, despite the uptick in yields, trading in conventional 2.5s remains fairly robust. The accompanying chart shows a 3-day moving average of 30-year UMBS 2.5s as a percentage of total 30-year UMBS trading, and indicates that 2.5s have recently comprised 10% or more of overall conventional MBS trades (both TBAs and specified pools). 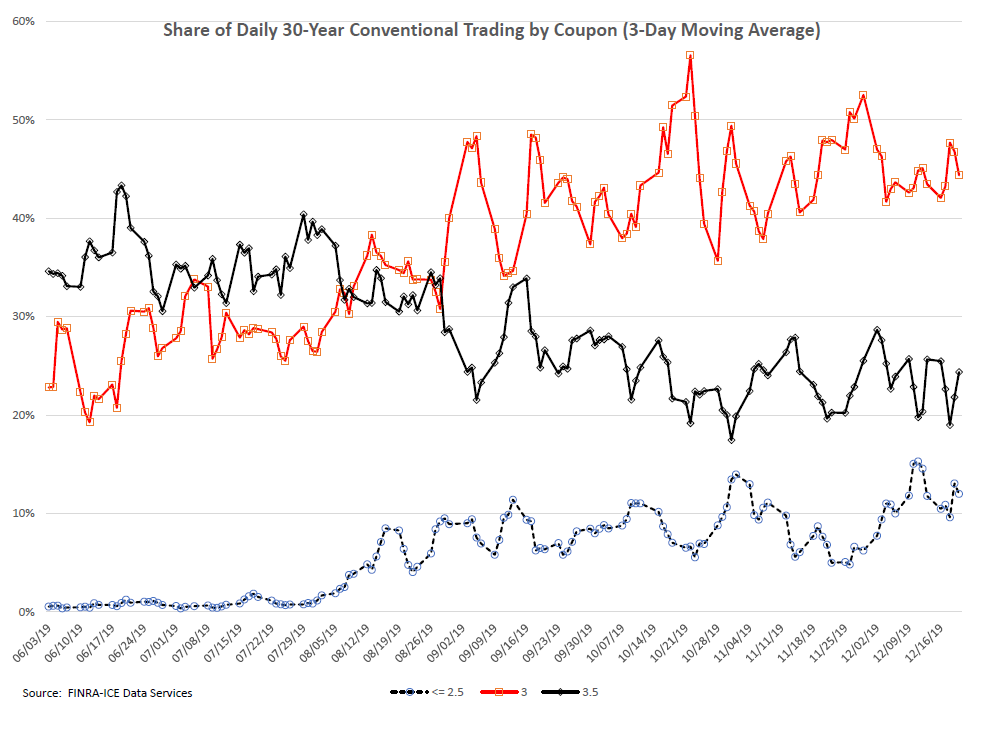 Click to enlarge Along with continued Fed purchases of the coupon (for the first time since 2013), it suggests that UMBS 2.5s are becoming increasing accepted as a trading and investment vehicle, and can be traded and shorted without major fears of a short squeeze. (This is not yet the case in Ginnies, where GNII 2.5s volume share is smaller and significantly more volatile.)

The FHFA recently put out a request for input for a proposal to change UMBS MBS issuance and trading practices. The proposal, available at FHFA.gov, is primarily intended to continue to “align” the price and prepayment performance of UMBS pools issued by Fannie Mae and Freddie Mac by creating larger and ostensibly more “fungible” pools. The proposal has three parts:

While the proposal is fairly complicated, our views can be summarized as follows:

This is our last commentary for the year. Happy Holidays to all our clients and readers.