Treasury yields ended the week modestly higher, following a sharp rally earlier in the week.  Surprisingly, Friday’s surprisingly strong employment report only pushed yields 2-3 basis points higher, while Fed Funds futures indicate a 40% likelihood of a Fed easing by the 6/10/20 meeting, down from a roughly 50% chance earlier in the week.  The 10-year yield closed on Friday at just under 1.84%, about 6 basis points higher on the week, while the yield curve steepened; the closely-watched 2-10 spread widened by roughly 7 basis points to +22 bps, while the 2-5 year spread moved wider by about 3 bps.  It is noteworthy that the yield curve has become significantly less “bowed” than it was in September and October.

This is obvious from a look at the accompanying chart, which shows on-the-run Treasury yields at the end of the last three months; the change is also reflected in the recent narrowing of the 2-5-10 “butterfly” (basically the difference between the 2-5 and 5-10 spreads) to -13 bps from -24 bps at the beginning of October.  (A negative butterfly indicates a concave configuration, while a curve where the ‘fly is positive would have a bulging profile.) 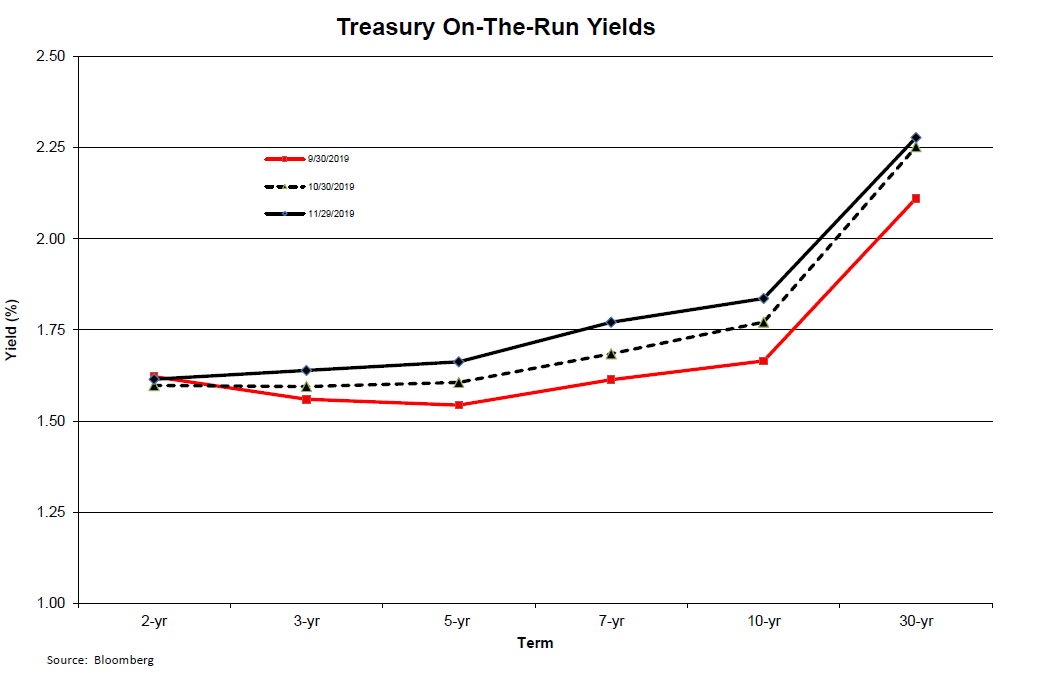 Click to enlarge MBS enjoyed a strong week, with a number of coupons closing higher on Friday despite the selloff in Treasuries.  30-year UMBS cumulatively outperformed the 10-year over the last five sessions by as much as a quarter-point (duration-neutral), while Ginnie performance was spottier, with GNII 3s outperforming their 10-year hedge ratios by 7/32s while 3.5s barely outpaced 10s.  The 30-year Fannie current coupon spread tightened to interpolated Treasuries by about 2 basis points.  MBS swaps were mixed, with the most notable adjustment being the tightening of GNII/UM30 premium swaps (3.5s and 4s) by 6-7 ticks.  The GNII 2.5 roll, currently trading around 2/32s special, is the one roll most prone to blowing out to very wide levels (e.g., reaching 8/32s prior to Class C notification in November).  However, it appears that liquidity has improved in the coupon, as trading in Ginnie 2.5s represented about 8% of total Ginnie volumes last week, suggesting that the roll may be better behaved as December notification approaches.

The FHFA published proposed changes to conventional pooling practices that were widely discussed last week.  The primary objective of the proposal is to continue the post-Single Security push toward “aligning” the prepayment behavior of pools issued by Fannie Mae and Freddie Mac, a condition viewed as essential by the regulator in order to avoid fragmentation of the market for UMBS.  (Liquidity in the sector would be greatly impaired if traders conclude that the two GSEs prepay differently and began to stipulate “Freddie only” or “Fannie only” pools when trading TBAs.)

The proposed policy would push most MBS issuance into multi-issuer pools issued either through securitization into “major” pools or as pools comprised of loans sold to the GSEs’ cash windows.  In the words of the document outlining the proposal, “[A]ll seller/servicers would be incentivized or required by Enterprise policy” (i.e., policies of Fannie and Freddy) “to deliver the vast majority of production into generic multi-lender pools…”  Specified pools could continue to be created as single-issuer pools “under prescribed circumstances,” which to most observers means that the GSEs would stipulate what attributes constitute “specified pools.”  Finally, seller/servicers whose pools are deemed by Fannie or Freddie to prepay faster than “normal” would be forced to securitize their loans into non-TBA-eligible single issuer pools, which would trade at a significant concession to TBAs.  (A fair comparison might be conventional high-balance pools, which for low premium coupons are currently trading between 24 and 30 ticks behind TBAs.)  This would put those unfortunate seller/servicers at an enormous competitive disadvantage to their peers.

It’s beyond the scope of this commentary to address all the implications of the deceptively complex proposal.  In fact, it’s unclear to us that the changes outlined by the proposal are even necessary, as data and analyses from Refinitiv indicates that the share of multi-issuer pools has steadily increased since 2014, and comprises 75% of conventional MBS issued thus far in 2019.  Note that these represent proposed changes for which the FHFA is requesting input and comments, and no timetable for adoption of the proposal has been published.  The entire proposal is available by clicking on this link.