The rally in longer rates was driven by declines in “real” yields (i.e., rates excluding inflation); while the 10-year TIPS yield dropped by about 5.5 basis points, the 10-year break-even rate (i.e., the cash Treasury yield minus the TIPS yield, an indicator of expected future inflation) barely budged. Realized Treasury volatility continues to plummet; as the accompanying chart indicates, the daily 40-day standard deviation of 10-year yields is approaching 4.5 basis points after peaking at around 6 bps in early September. 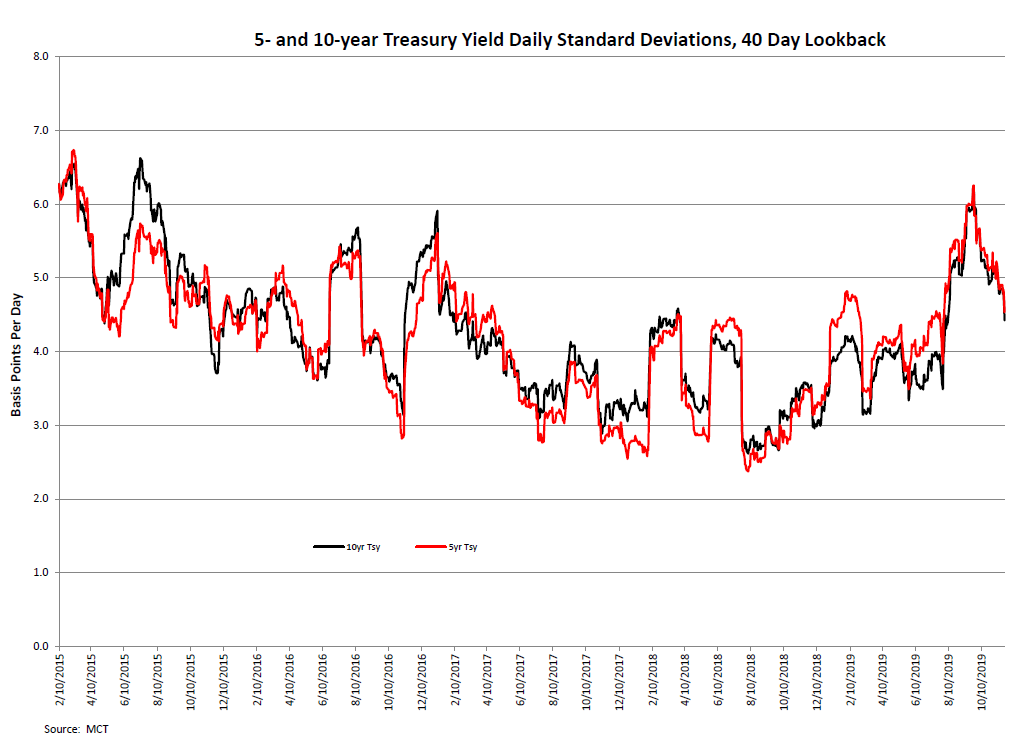 Click to enlarge MBS endured a difficult week, with the sector unable to keep up with the rally in intermediate Treasuries. Most 30-year UMBS and Ginnie IIs lagged their 10-year hedge ratios by 5-8 ticks, with a few coupons (e.g., conventional and GNII 4.5s) trailing 10s by a quarter-point and 10/32s, respectively. Defying the market rally, trading in UM 2.5s shriveled, comprising less than 7% of last week’s 30-year conventional volumes. (For context, 2.5s represented 12.5% of volumes for the week of 10/28-11/1, reaching a high of about 18% on 10/31.) Interestingly, the drop in 2.5% trading volumes coincided with Fed purchases of $450 million of the coupon, their first 2.5% purchases in a month.

Rolls remain fairly cheap, with only a few (GNII 2.5s and 3s) trading a tick or more special. In fact, the front and back UM30 3.5 rolls turned negative, well below their break-even (economic) value of around 3/32s (using a 1.875% COF and 15% CPR). On its face, this looks reflect significant fears of a spike in prepayments, as the break-even CPR for a drop of zero is 43% CPR (or 1348% PSA), much faster than recent prints or projections. (2018-production Fannie 3.5s, the fastest vintage for that coupon, prepaid at 27% CPR in October; the Bloomberg median projected speed for the coupon is currently 462% PSA.) While this may also reflect concerns over year-end funding pressures, higher-coupon conventional Jan/Feb rolls are also trading well behind their break-even values.

Mortgage originators are often tempted to view their offerings in the context of published average rates for the industry. The three most commonly used rate surveys are:

Unlike the other surveys, the MBA publishes the “contract rate” and average associated points, along with the “effective rate” adjusted for the impact of points on the average rate. (Freddie Mac obtains the “average contract interest rate, average number of points…that would be quoted to consumers on conventional, conforming first mortgage products.” Bankrate.com does not appear to control for points; the notes on Bloomberg for their 30-year conventional loan rates says that “[R]ates include only 30-Year Fixed Products, with and without points.”)

One impediment to a fair evaluation, however, is that the various published rates are often quite different. The chart below shows weekly prints for the Freddie survey and the Bankrate.com national average, along with the MBA’s contract rate. 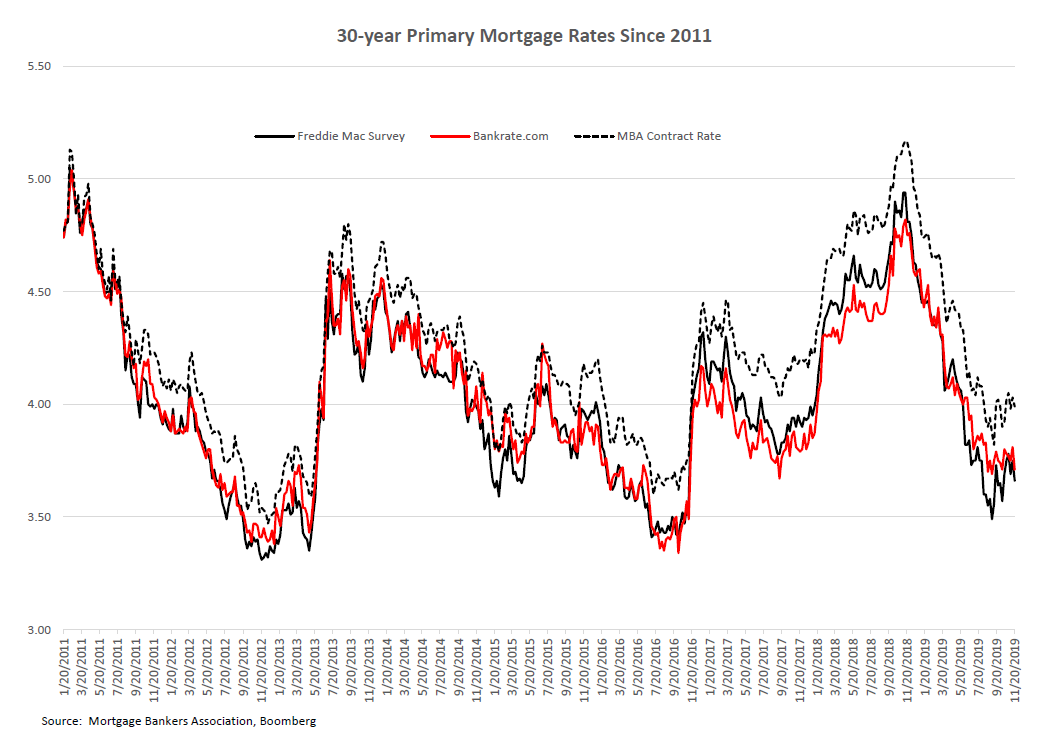 Click to englarge The difference between the MBA and Freddie rates has averaged about 20 basis points since early 2011, and recently (the week of 8/10/19) reached its widest level over the period of 41 basis points.

To examine this in more depth, we compiled the weekly weighted average rates for 30-year conventional locks in MCT’s client pipelines for the last three weeks and compared them to the published averages over the same time frames.  The results are shown in the accompanying table.

Click to enlarge They indicate that over this period the weighted average rates in the pipelines are fairly close to the MBA’s contract rate. While this is too small a sample to constitute a definitive study, it suggests that the MBA contract rate is a good proxy for “average” rates, at least for 30-year conventional loans.

Happy Thanksgiving to all our clients and readers!