The 10-year Treasury yield rose to 0 .98% to begin last week, following the announcement of Biden’s victory. However, uncertainty continues to plague markets due to the absence of a standard concession and continued accusations of fraudulent voting. The uncertainty caused the 10-year to retreat to 0.89% by Friday. The spread between the 10-year Treasury to the 5/10-year blend has tightened 3bps to +72.

*The MBS Market Commentary link will take you to MCT’s website.*

“Mortgage application activity was mixed last week, despite the 30-year fixed rate decreasing to 2.98 percent – an all-time MBA survey low. The refinance index climbed to its highest level since August, led by a 1.5 percent increase in conventional refinances,” said Joel Kan, MBA’s Associate Vice President of Economic and Industry Forecasting. “The purchase market continued its recent slump, with the index decreasing for the sixth time in seven weeks to its lowest level since May 2020. Homebuyer demand is still strong overall, and activity was up 16.5 percent from a year ago. However, inadequate housing supply is putting upward pressure on home prices and is impacting affordability – especially for first-time buyers and lower-income buyers. The trend in larger average loan application sizes and growth in loan amounts points to the continued rise in home prices, as well as the strength in the upper end of the market.” The average contract interest rate for 30-year fixed-rate mortgages with conforming loan balances decreased to a survey low of 2.98 percent from 3.01 percent, with points decreasing to 0.35 from  0.38 (including the origination fee) for 80 percent loan-to-value ratio (LTV) loans.

The Mortgage Credit Availability index rose 2.3% in October, just its second monthly increase this year, the Mortgage Bankers Association said in a statement. September saw the index drop to its lowest in over six years. The index is down 34% compared with the same time in 2019. 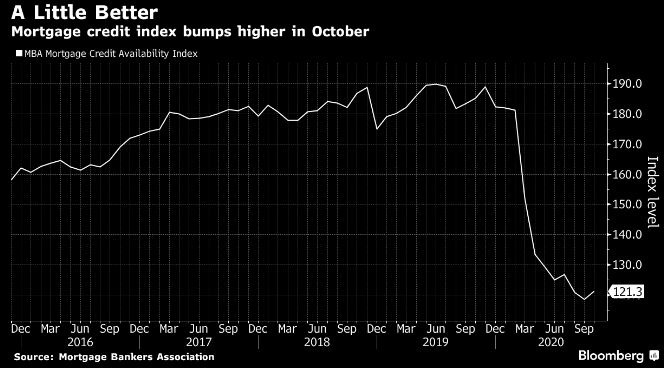 Click to enlarge Cumulative weekly performance of MBS – relative to Treasuries – was thoroughly mixed last week. Lower-coupon Fannie 30-years underperformed by 6 ticks while higher coupons beat by 2-5 ticks. Lower-coupon Ginnies outperformed by 5-7 ticks and higher coupons were relatively flat. Fannie 15s were flat on the lower coupons and 6-10 ticks better than the 5-year Treasury on the higher coupons.
The Federal Reserve will target up to $65.4b MBS from Nov. 16 to Nov. 30. Last cycle saw it target
$61.2b. The Fed’s aggregate mortgage buying Friday was $4.2b, compared with the previous session’s $5.3b, according to New York Fed data. The most heavily purchased was the 30-year UMBS 2%, for December settle, with $1.9b.

Additionally, the FHFA said in a statement that Fannie Mae and Freddie Mac will extend several loan origination flexibilities relative to Covid-19 by a month to December 31st. The flexibilities include alternative appraisals on purchase and rate term refinance loans, and alternative methods for documenting income and verifying employment before loan closing Key events this week: