Treasuries yields were lower at the end of a fairly volatile week. Bonds began the week with two straight sessions of lower prices, but bounced back after Wednesday’s rate cut by the Fed, along with what was viewed as a dovish press conference by Fed Chairman Powell. Despite a relatively strong employment report on Friday, the yield on the 10-year note ended the week about 8.5 basis points lower, while the best performer on the “coupon curve” (i.e., coupon-paying Treasury notes and bonds) was the 30-year bond, the yield of which dropped by about 10 basis points on the week.

Money-market rates were pushed lower by the Fed’s 25 basis points easing on Wednesday, which left the Fed Funds target rate in a range of 1.50-1.75%. As a result of the downward pressure on short rates, the yield curve shifted around a bit; the 3mo/10-year widened by about 4 basis points, while the 2-year/10-year spread narrowed by about 2 basis points. The rebound in the former spread, which was as inverted as -50 basis points at the end of August, gave some relief to the prognosticators who view an inverted curve as a precursor of an economic slowdown.

MBS had a fairly strong week, although the performance was skewed toward lower coupons, which outperformed their hedge ratios by 3-6 ticks. Both the Fannie and Ginnie current-coupon spread over interpolated 5-10 year Treasuries tightened by about 7 basis points, while 15-year Fannies improved by about 3 basis points relative to the 5-year note. Dollar rolls were steady to slightly improved on the week, reflecting the lower funding costs associated with the Fed easing. However, higher-coupon UM30 rolls are still trading to negative drops, while by contrast the GNII 2.5 front-month roll remains over 5/32s special. (The GNII 3 and 3.5 rolls are also special by about 2/32s and 1/32, respectively.) The rally and resulting down-in-coupon bias to the market left most coupons swaps slightly tighter, most notably the UM30 3.5/3 swap, which narrowed by roughly a quarter-point.

Trading volumes in UM30 2.5s continued to tick higher, representing about 12.5% of last week’s total 30-year conventional volumes. Despite the coupon’s improved liquidity, the 3/2.5 swap (which ended the week at 2 7/32s) remains close to its recent wides. The relatively poor recent performance of 2.5s has led some lenders to question why conventional pricing for some note rates (e.g., 3.5% and 3.625%) has appeared to track price changes for UM 2.5s rather than 3s. The question implied by this discussion is essentially how best-execution is impacted by TBA price levels, as well as what other factors are involved in the calculations. (“Best-execution” in this context measures which security coupon and issuer represents the securitization option that maximizes sale proceeds; in this example, the question is whether the securitizer would pool loans into UM30 3s or 2.5s.)

Understanding the trade-offs involved in the optimal coupon calculation requires an understanding of how cash flows for loans in a pool are allocated, along with how guaranty fee buy-ups and buy-downs work and are applied. Keep in mind that certain portions of every loan’s interest are dedicated to 1) required servicing (25 basis points almost uniformly) that has to be held by some entity, and 2) the guaranty fee, i.e., the fee that Fannie and Freddie charge for effectively providing credit insurance for loans in the pool. (A current assumption of 45 basis points for 30-year fixed-rate loans is fair; those involved in the MBS market before 2008 will remember that this is at least double the prevailing rate prior to the financial crisis).

Both Fannie and Freddie facilitate pooling by either buying “excess servicing” (i.e., interest left over after being allocated to required servicing, the g-fee, and the pool coupon) from the issuer, or alternatively allowing the guaranty fee to be “bought down” or monetized through a one-time payment to the GSE. The prices (in the form of multiples) at which Fannie and Freddie will perform these transactions are contained in the “Buy-up/Buy-down” (BUBD) grids; these are essentially markets that the GSEs make in interest-only cash flows generated by the loans, and vary by note rate. Making profitable markets means that the GSEs will buy servicing at a cheaper price/lower multiple in a buy-up transaction than they will essentially sell it by buying down a loan’s g-fee; a fair assumption is that the difference between the two multiples is around 2x. (For an at-the-money rate, Fannie and/or Freddie may quote a 4.2x multiple to buy excess servicing and a 6.2x multiple to buy down guaranty fees.)

The table below shows a hypothetical best-ex calculation for a 3.625% loan. 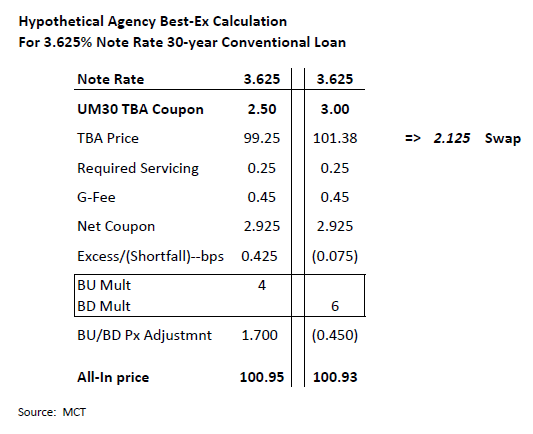 Click to Enlarge In this example, the required servicing and g-fees are assumed to be the same for both execution options (25 bps and 45 bps, respectively), leaving a “net WAC” of 2.925%. Pooling into a UM 2.5% leaves 42.5 basis points of excess servicing to be sold to the GSE, while pooling into a 3% leaves a 7.5 basis point shortfall. The example assumes a buy-up multiple of 4x (garnering 1.7 points of revenue as part of the transaction, or 4 x 0.425), while buying down the g-fee results in an extra cost of 0.45 points (6 x .075). The BUBD revenues and costs are offset by the fact that the proceeds from selling 2.5s is significantly lower than those received for selling 3s, given their significantly lower price. A review of the numbers in the table indicates that the two primary factors in the best-ex decision are 1) the different between the buy-up and buy-down multiples, and 2) the price difference between the two MBS coupons, represented by the coupon swap. The example indicates that execution roughly breaks even with the 3/2.5 swap around 2.125 points, assuming a 2x difference in the buy-up and buy-down multiples.

While a lot more can be (and has been) written on the subject, this simple example indicates that at current market prices best-execution for this important note rate will vary between UM 2.5s and 3s. In addition, a further widening of the swap beyond the current level of around 2 ¼ points suggests that 3s will become the coupon of choice for issuers, while a narrower swap will push execution back into 2.5s. This insight in turn has implications for issuance volumes, as well as hedging decisions and tactics.

The next commentary will be distributed on November 18th, as next week we will observe the Veterans Day holiday.