Treasury yields continued their relatively slow back-up this week, leaving the yield on the 10-year note at its highest level since mid-September. The 10-year yield has moved about 27 basis points higher since early October, and closed just shy of the 1.80% level. The Treasury selloff also took place amid a backdrop of declining volatility; the 40-day standard deviation of the 5- and 10-year notes’ daily changes has dropped roughly a full basis point since late September. The uptick in rates also left the entire Treasury curve into positive-sloping territory, with the closely-watched 3mo/10-year and 2-year/10-year spreads at +16 and +17, respectively.

Fed funds futures still project a 90% probability of a rate cut by the Fed at Wednesday’s meeting, which would leave the range of the target rate at 1.5-1.75%. After the upcoming meeting, however, the market’s projections for Fed policy are cloudy; for the 4/29/20 meeting the market is projecting a 41% chance of no change, a 39% chance of a 25 basis point cut, a 16% probability of a 50 bp cut, and a 4% likelihood of a 25 bp rate increase.

MBS had a decent week, with 30-year UM30 3s and 3.5s outperforming the 10-year by a cumulative 1-3 ticks while 4.5s and higher wound up lagging their Treasury hedge ratios. Ginnie IIs had a relatively strong week, with GNII 3s through 4s outpacing 10s by 3-5 ticks over the last five sessions. The 30-year Fannie (UM) current coupon spread over Treasuries widened modestly versus interpolated Treasuries, while the 30-year Ginnie and 15-year Fannie spreads narrowed by 1-2 basis points. Current-coupon Ginnie II rolls remain a concern, with the GNII 2.5 roll (Nov/Dec) currently trading at more than 6+ (about 5+ ticks special) while GNII 3s are currently rolling around 2 ticks special in the front month.

While most coupon swaps have recently moved in line with their durations, the performance of UM30 2.5s has been erratic, even after trading volumes and liquidity for the coupon have picked up. (Last week, conventional 2.5s comprised just under 7% of all 30-year conventional trading.) The chart below shows both the UM30 3/2.5 and 3.5/3 swaps since early June, along with the yield on the 10-year note. (Note that the wider the coupons swap the worse the relative performance of the lower coupon.) 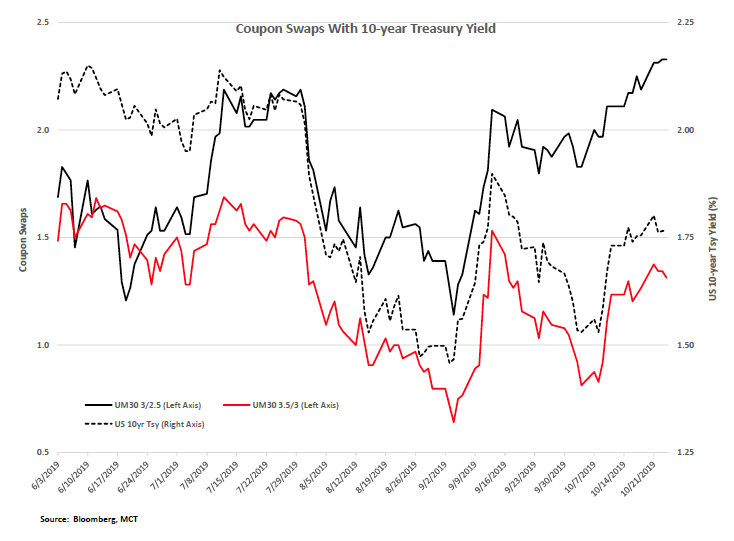 Click to Enlarge The chart indicates that the 3/2.5 swap widened out at the beginning of July even as Treasury yields held steady; conversely, the swap remained roughly unchanged even as the Treasury yield dropped in September before widening out over the past few weeks.

The erratic performance of conventional 2.5s can also be seen by reviewing a scatterchart such as one shown below. 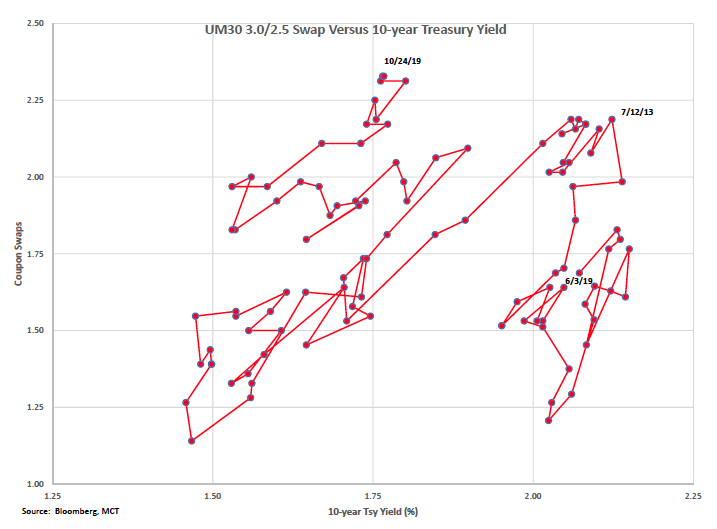 Click to Enlarge The chart shows the daily closes for the 10-year Treasury yield on the horizontal axis along with the UM30 3/2.5 swap on the vertical axis since June of this year. The chart can be interpreted as showing a number of different “regimes” for the relationship; the period beginning in early June through mid-July, a second relationship holding between mid-July and mid-September, and then a third regime from mid-September through last week. Moreover, none of the relationships exhibit a strong statistical relationship. The R-square value for the entire series is around 5%, representing a very weak correlation and explanatory power; even the period having the best fit (from 7/3 through 9/12) had an R-square value of 79%, weaker than the 91% for the UM30 3.5/3 swap through the entire 5-month period encompassing 104 observations.

These relationships have a number of implications. As we’ll discuss in a future report, the swap is a key factor driving execution, i.e., what coupon is used as a pricing benchmark by aggregators when pricing loans. (For example, would a 3.625% loan slot into a UM30 3.0 or 2.5?) It also impacts hedging choices, as the decision to short conventional 2.5s (or any coupon, for that matter) is highly dependent on the trader’s confidence in its consistent and relatively predictable performance.