Intermediate and long-term Treasury yields crept up 10-12bps last week. The 30-year Treasury is currently yielding 1.61% and the 10-year is 0.84%. The sell-off in Treasuries was induced by increasing expectations for a stimulus package either passed before the election (unlikely), or by a democratic win in the election based on recent polls.

Refinance activity increased 0.2% for the week ended Oct. 16, according to the Mortgage Bankers Association, following the previous week’s 0.3% drop. The refi index stands 74% higher on the year. The purchase index decreased 2.1%. The conventional refinance sub-index fell 0.7% while the government sub-index was up 2.7%. VA and FHA refinancing applications fell 8.5% and rose 17.6%, respectively. The FHA sub-index has risen 29% over the past month; the VA index has increased 5.4%. The average size for a refinance loan decreased to $294.0k from $294.2k. Its YTD low of $284k was seen in January. The Freddie Mac 30-year mortgage rate is at 2.81%, a record low. The Mortgage Bankers Association forecasts purchase originations will increase to $1.54 trillion in 2021, which would surpass the current annual record of $1.51 trillion seen in 2005.

The Federal Housing Finance Agency said on Wednesday, Fannie Mae and Freddie Mac will be permitted to continue buying certain single-family mortgages in forbearance through Nov. 30.

Cumulative 5-day performance of MBS was a mixed last week. Fannie 30-year coupons performed incongruently with the 10-year Treasury benchmark. Most notably, the 2.5 coupon underperformed by 7 ticks and the 3 coupon finished flat. Higher coupons, including the 2, outperformed the benchmark by 6-13 ticks. Ginnie securities saw more consistency as lower coupons underperformed the 10-year by 1-6 ticks, and higher coupons were 8-15 ticks better. Fannie 15-years were much quieter with lower coupons finishing the week flat and higher coupons outperforming by 4-6 ticks.

A large short position is building in long-maturity Treasuries due to blue-wave sentiment. See the chart below. 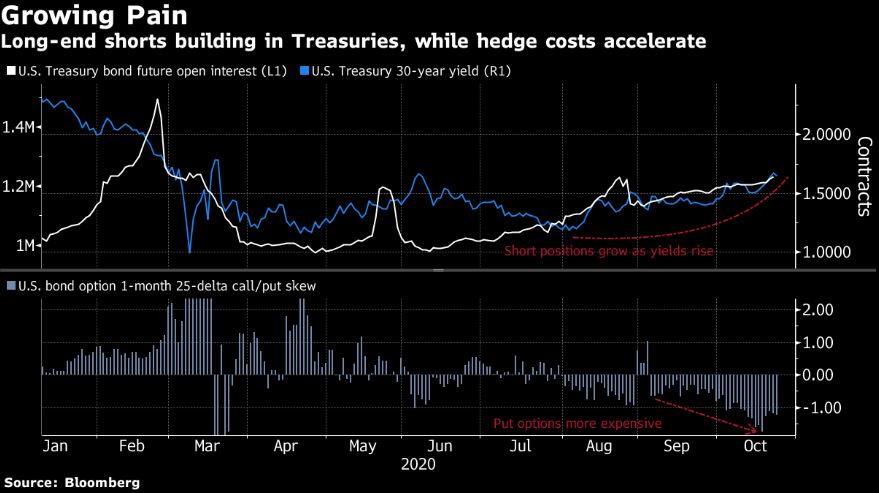 Click to enlarge Recent polling has resulted in a blue-wave sentiment that cruxes on a democratic win in the general election, and a blue majority in the house. The yield-curve is currently bear-steepening with contingents on significant fiscal stimulus passing if the blue-wave theory holds true. This narrative poses significant down-side risk for mortgage lenders whose positions have (until recently) benefitted from overweighting long-positions on originations because interest rates could begin to drift upward while MBS prices decrease.

Fortunately, the Fed has maintained that they will continue their buying of MBS and Treasuries at the same pace to maintain the low yields we have been seeing (somewhat implicit yield-curve control). Be wary though, due to a phenomenon known as convexity hedging, MBS have a way exacerbating a sell-off in panicked times as investors look to shorten the duration of their portfolio. Suffice to say, adequately hedging a portfolio of originations is as important as ever right now.