Treasury markets were fairly quiet last week, leaving the yield on the 10-year at 1.755% at Friday’s close, up about 2.5 basis points on the week.  The yield on the 2-year note declined modestly on the week, leaving the 2-10 year spread (which closed at +18 basis points) at its widest level since late July.  The relatively placid trading after the end of the third quarter is reflected in the realized volatility of the 5- and 10-year Treasury notes; as highlighted by the accompanying chart, the 40-day standard deviation of both notes has declined by almost a full basis point over the last few weeks.  (For context, this equates to a difference in daily price changes of about 3/32nds on the 10-year note.  It’s also notable that the standard deviations remain high relative to their levels in 2016, which reflected both the summer Brexit vote and the Presidential election.)  The money markets appear poised for another Fed easing at the 10/30 meeting, with the Fed Funds futures market projecting an 87% probability of a 25 basis point cut in the funding target range. 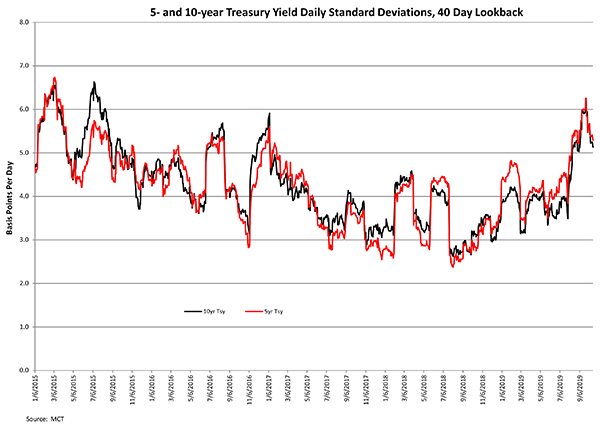 Click to Enlarge *The MBS Weekly Market Profile Report corresponds to the commentary below.*

MBS were relatively well-behaved last week, with most liquid TBAs outperforming their duration-neutral performance by 1-3 ticks.  The Fannie 30-year current coupon spread was unchanged over interpolated 5-10 Treasury yields, while the Ginnie spread widened by a couple of basis points.  The conventional primary/secondary spread tightened by 4 basis points last week, and is almost 30 basis points tighter than its widest levels experienced in mid-September.  Coupon swaps ended the week mixed, with only the 30-year 3.5/3 swaps (in both UM30s and Ginnie IIs) moving noticeably wider.
However, one disquieting element was the continued volatility in the GNII 2.5% roll, with the Oct/Nov roll closing on Thursday’s Class C notification day offered at 9/32s versus a break-even level of less than a tick.  This bears watching, since a chronically special Ginnie 2.5 roll would make it difficult for traders to hedge their production of lower-rate government loans.  Issuance of loans being pooled in Ginnie 2.5s appears to be increasing; according to eMBS, month-to-date issuance of multi-issuer Ginnie 2.5s ended last week at $3.7 billion, more than double September’s issuance of $1.6 billion and around 9% of total MTD issuance (around $41.5 billion) of Ginnie II jumbo pools.

A separate issue that continues to weigh on MBS traders is the high relative levels of conventional gross WACs, i.e. the weighted average note rates of loans being securitized into UMBS pools.  The weighted average WACs of all UM30 3.0 and 3.5 pools originated in September were 3.927% for UM 3s and 4.36% for 3.5s, according to data from Refinitiv.  Their model also provides a “parallel coordinates” graph that show each pool’s WAC, which is copied below for all UM30 pools with coupons between 3% and 3.5% issued in September.  The graph is noteworthy in that it highlights the concentration of WACs around historically high rates relative to the pools’ coupon rates, and not skewed by issuance of a few large pools.  This is a concern for investors and dealers since MBS prepayment performance is driven by loans’ note rates; their ability to model and project prepayment speeds is complicated by the historically high level of note rates in pools.  (E.g., if both Fannie 3% and 3.5% pools had WACs of around 4.0% they could be expected to prepay similarly, all else equal.  This distorts analysts’ ability to compare prepayment performance for pools issued over different periods of time.)  Separately, the high relative levels of WACs reflect the choice by the majority of securities issuers to place loans into pools with the lowest possible coupon (i.e., “pool down”) subject to pooling rules.  These decisions are dictated by pooling economics, with a major factor being the relatively depressed levels of coupons swaps in the current market.