Cash-out refinances accounted for 23% of all refi loans in August. Originators have already begun to price in the refinance tax on longer lock periods and expectations of slower purchase times by aggregators. However, MBS pools with a higher percentage cash-outs have historically prepaid 10-15% more slowly than traditional refi loans, increasing investor appetite for the loan type. In the current refinance wave, we may see cash-outs begin to price more favorably due to investor appetite. The chart below shows refinances as percentage of total applications. 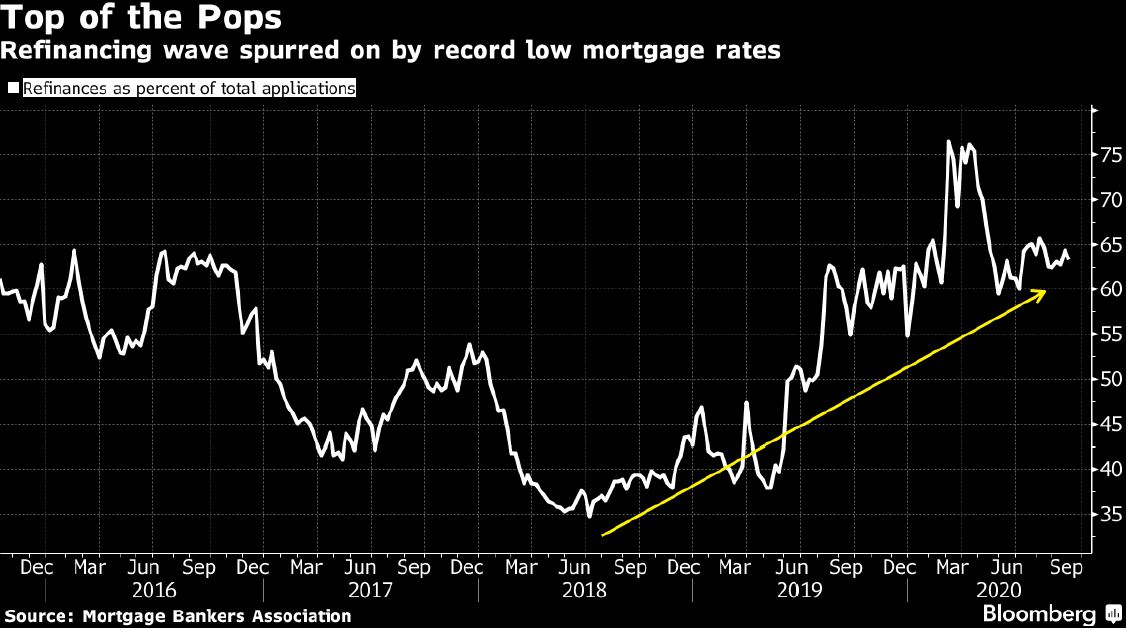 Cumulative 5-day MBS relative performance improved last week, especially in lower coupons. Fannie 30-years exhibited a 12-tick outperformance of the 10-year Treasury, while other coupons outperformed the benchmark by 1-4 ticks. Ginnies were mixed as the 2 and 3.5 coupon also outperformed by 12 ticks and other coupons were relatively flat. Fannie 15-years performed 3-4 ticks better on the lower coupons and lagged 1-6 ticks behind the 5-year benchmark on higher coupons. On Friday, the Fed’s aggregate purchases of MBS totaled $5.3 billion (their lowest since 9/17), and buying was heaviest in the 2 coupon. The 3 coupon suffered the most for both 30-year Fannies and Ginnies due to it being unsupported by Fed buying and a currently high refinance incentive for borrowers in that note rate range.

On Wednesday, the GSEs announced they will extend the buyout timeline for delinquent loans from 4 to 24 months beginning 1/01/21. This will provide MBS investors with additional carry for loans that have become delinquent. Unfortunately, the GSE’s announcement may only marginally improve yield for MBS investors (by slowing prepayments of delinquent loans) because security issuers are often incentivized to buyout a delinquent loan as soon as possible. That’s especially true if the loan has potential for modification and re-pooling. Additionally, it is expected that Ginnie will follow suit with Fannie and Freddie on the buyout rule.

With election day fast approaching, the fate of Fannie and Freddie in the battle over conservatorship remains to be seen. If the incumbent party loses, reforms due to long-held convictions of Fannie and Freddie contributing to the financial crisis may mean a delay in the privatization of the entities. By the same token, the left’s platform centers around expanded access to healthcare and affordability of housing. The GSEs play a pivotal role in expanding that access so it is not a stretch to imagine the left expanding their reach by decreasing capital requirements or supplying the GSEs with additional funding to build their affordable housing outreach. An incumbent win, however, would likely result in the GSE’s return to shareholders, but with stricter capital requirements.