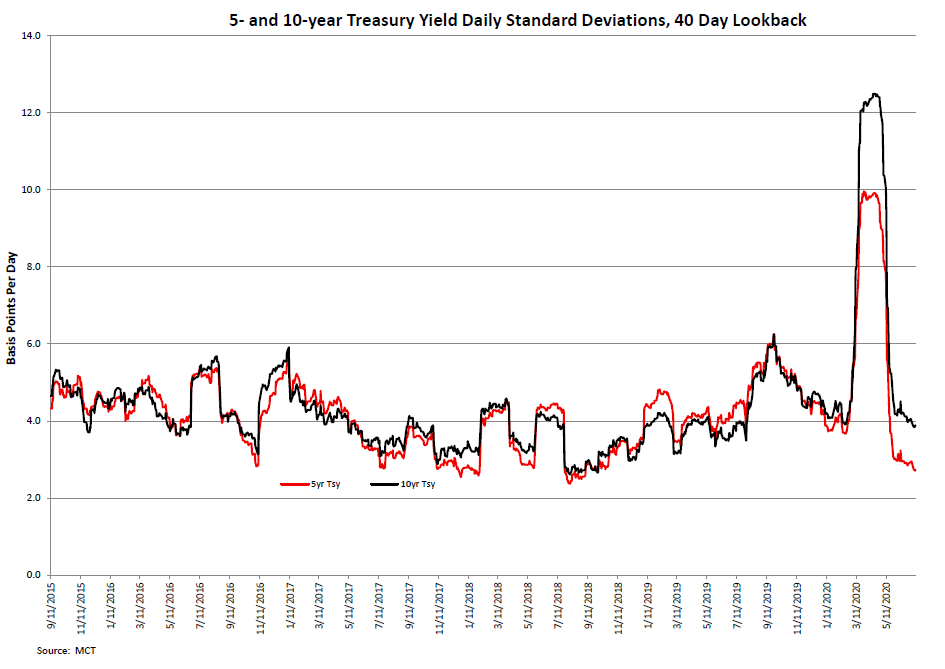 Click to enlarge MBS had a strong week, with the Fannie 30-year current coupon spread over Treasuries tightening by about 12 basis points.  The sector’s strength was highlighted by the strong price performance of Fannies 2s, which rose roughly 5/8ths of a point from 7/2 to 7/10 even as the price of the 10-year note increased by only 7/32s.  (See the chart below for Fannie 2 July-settlement prices since early May.) 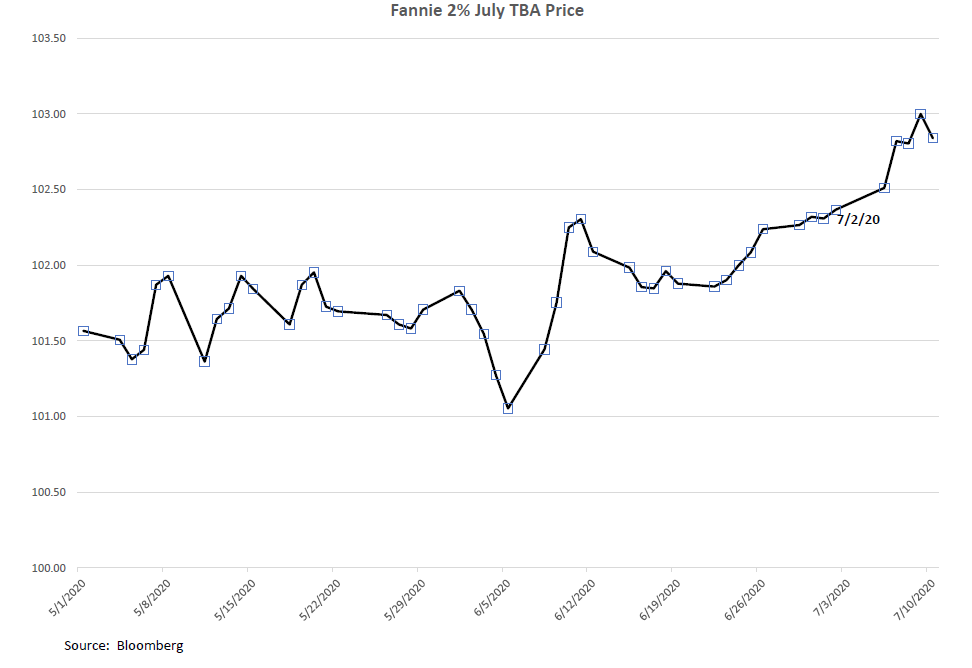 Click to enlarge However, the outsized (24 basis point) tightening of the Ginnie current coupon spread almost certainly reflects the transition from using the yield on GNII 2.5s to 2s; this is another example of the potential distortions associated with using the quoted current coupon rates and spreads as proxies for MBS secondary market “rates.”

It was notable, however, that Ginnie 2 trading activity picked up last week, averaging about $2.5 billion per day, or between 5-9% of daily Ginnie trading activity.  (Prior to July 1sth, GNII 2% activity only topped $1 billion twice, with average daily activity in June of about $500 million.)  However, using this coupon as a hedging vehicle remains treacherous, as the front-month roll is currently offered at 16/32s, a quite heinous 13 ticks special.  This strongly suggests that hedgers interested in trading GNII 2s have the ability to assign their trades, as pairing off trades will be prohibitively expensive until liquidity further improves.

A recent noteworthy development in the market has been the expansion of the categories in the specified pool markets to include maximum $200K and $225K loan balances.  This makes sense given the expansion of the conforming limit to over $500K, since capping loan balances at even those high cutoffs provides a fair degree of protection from very fast prepayment speeds relative to TBA deliverable cohorts.  (The pools typically delivered into TBAs are assumed to be “adversely selected,” i.e., everything that can’t be sold specified; this is analogous to the third day of a yard sale, where the remaining merchandise is “picked over.”)

It’s interesting to note that the development of these larger-balance specified categories would probably not have occurred under the FHFA’s proposed changes in pooling practices from earlier this year.  One provision of the proposal was that only approved specified pool categories would be allowed to be traded, which would have prevented the type of organic development experienced in the MBS markets over the last few months.  (Note that pay-ups for specified pools disappeared almost entirely in March, even as Treasury rates reached all-time lows, reflecting the liquidity squeeze experienced by both dealers and investors.)  Pay-ups for desired categories have returned and are quite healthy, with even $225K maximum balance GNII 3%s garnering around a ½ point premium over TBAs.