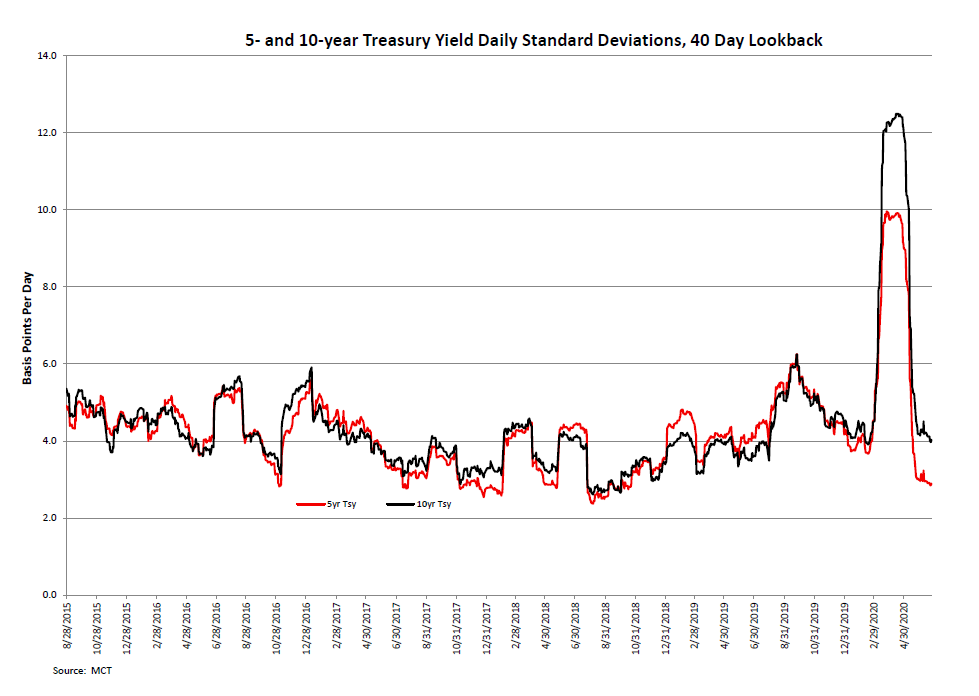 Click to enlarge Primary mortgage rates were roughly unchanged on the week, with the Freddie Mac Survey rate and the MBA 30-year conventional contract rate both holding at all-time lows of 3.13% and 3.30%, respectively.  Despite steady primary rates, the MBA’s application index declined; for the week ending 6/19, the refi index declined by 12%, while purchase applications dropped for the first time in ten weeks.  (Purchase activity remains strong, however; the 4-week moving average is at its highest level since the financial crisis in 2008.)

Most 30-year UMBS moved in line with their hedge ratios last week, as did lower-coupon Ginnies, while Ginnie II premiums (3.5s and higher) lagged the 10-year note by 8-12 ticks.  Most current coupon spreads narrowed a bit, with the 30-year Fannie spread over interpolated Treasuries ending the week 4 basis points tighter.  (The Ginnie spread tightened by 15 basis points, but we suspect that reflects changes to the composition and performance of the index, at least as reported by Bloomberg.)

Another interesting development was the collapse in both the conventional and Ginnie II 3.5/3 swaps.  While the Ginnie swap ended at -12/32s (11 ticks more inverted than the prior week), the UM30 3.5/3 swap ended at -2/32s.  (This certainly complicates the pricing of IOs and servicing for premium note rates, as many analysts use coupon swaps as a metric for pricing their cash flows.)  Dollar rolls for liquid coupons remained special.  The Fannie 2 July/August roll ended the week about 4/32s special, while the Ginnie 2.5 and 3 rolls closed about 3+ better than their break-even values.

The CFPB finally released a preliminary proposal to amend the regulation that defines qualified mortgages (QMs), while extending the exemption (known as the QM patch) until the new rule is finalized (or the GSEs come out of conservatorship).   The proposed new QM definition would do away with the 43% debt-to-income ratio threshold and replace it with a price-based (or actually a rate-based) threshold mandating that a loan’s APR can be a maximum of 2% over the Average Prime Offer Rate (APOR) for it to be treated as a qualified mortgage.  In the CFPB’s view, this measure “is a strong indicator of a consumer’s ability to repay and is a more holistic and flexible measure of a consumer’s ability to repay than DTI alone.”

A look at MCT’s client pipelines provides a very revealing picture of recent lending activity.  The accompanying chart, which shows the locked rate for clients’ current 30-year conventional and government pipelines, illustrates how capital market conditions have impacted lending activity.  The graph shows that there are a large number of government locks (about 30% of the government pipeline) with note rates of 2.75%.  This reflects the fact that many lenders didn’t offer note rates lower than 2.75%, most likely because that was the lowest rate that could be securitized into GNII 2.5s, the lowest-coupon liquid Ginnie security.  (Lenders could improve the pricing and/or the credit over time as rates declined, although the rate was floored at 2.75%.)  Lenders offered lower note rates for conventional loans, however, since they were (and are) comfortable with the liquidity of UM30 2s, which can be backed by loans with rates as low as 2.25%.  The graph suggests that while conventional note rates are distributed relatively “normally,” the distribution of Ginnie rates is artificially truncated at the 2.75% level, reflecting the different degrees of liquidity and acceptance of the UM30 and Ginnie II 2% coupons. 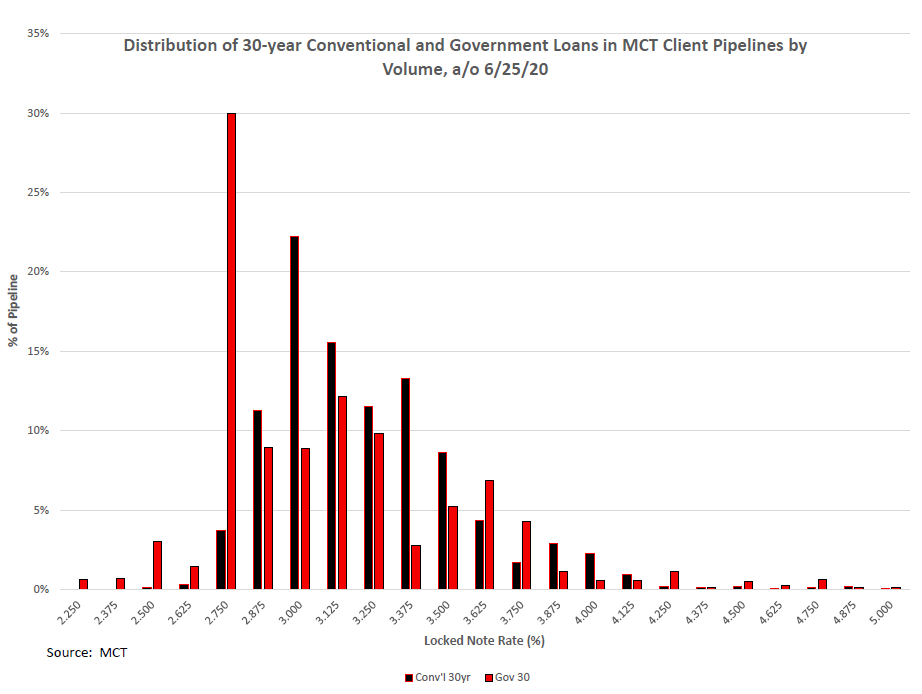 Click to enlarge There won’t be commentary next week; have a happy and safe Independence Day holiday.