MBS struggled last week, as most coupons cumulatively lagged their Treasury hedge ratios by 6-13 ticks.  The Fannie Mae 30-year current coupon spread over Treasuries widened by about 10 basis points, while the Ginnie spread increased by 8 bps.  Dollar rolls continue to trade in excess of their economic values; while June’s Class C notification passed without incident, the offer side of 8/32s for the GNII 2.5 July/August roll is roughly 4+ ticks special.  Fannie 2s are also rolling about 3+ special, while the 2.5 and 3 rolls are special by 1+ to 2 ticks.  One noteworthy landmark was reached on Tuesday, however, when for the first time Fannie 2s were the most actively traded 30-year conventional coupon, with $44.8 billion in daily activity (versus $43.4 billion in Fannie 2.5s).

Both the Freddie Mac and MBA 30-year rates reported new lows last week, which in turn gave a boost to refinancing activity; the MBA’s refi index rose to 3891, its highest level since mid-April.  However, another aspect of this week’s application survey was the continued weakness in ARM applications. The ARM percentage by loan count reported at 2.8%, just a tenth of a percentage point above its low since 2012 and the fifth time since late March that it reported below 3%.  (Note that the ARM percentage by volume, which reported at 7.3%, is also at a multi-year low; it is normally higher than the loan count percentage because average ARM loan sizes are larger.) 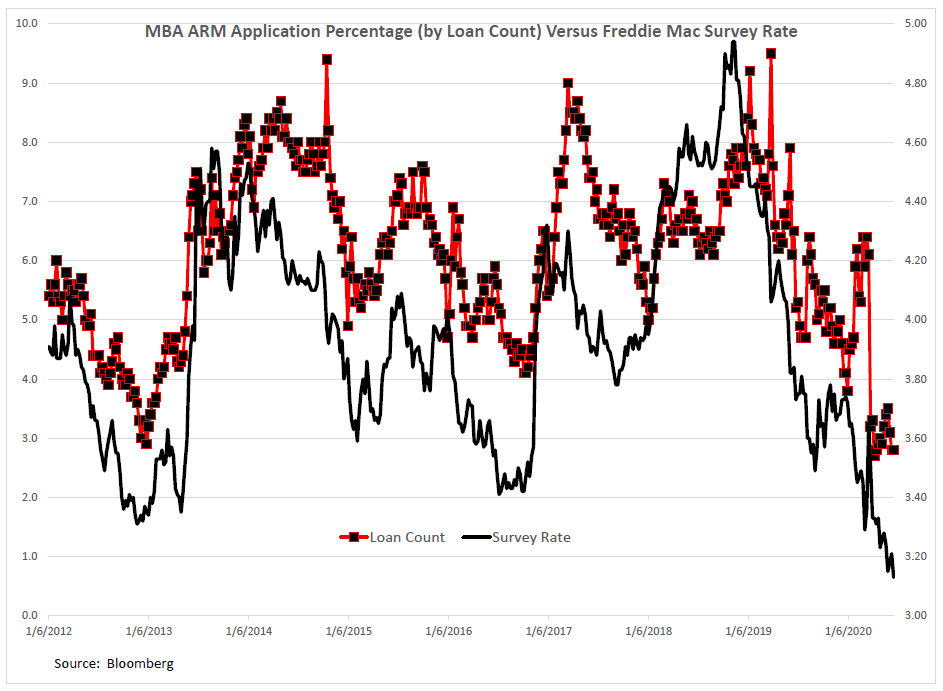 Click to enlarge (The correlation between the ARM percentage and the survey rate is roughly 75%.)  This suggests that the historically low rates available for 30-year fixed-rate loans are attractive enough to lure borrowers away from the ARM product.  This is also consistent with the convergence between fixed and ARM rates, as highlighted by the chart below.  This graph shows the MBA’s 30-year fixed conventional and 5/1 ARM rates over time, and reinforces how much the mortgage curve (as opposed to the Treasury curve) has flattened over the past few months. 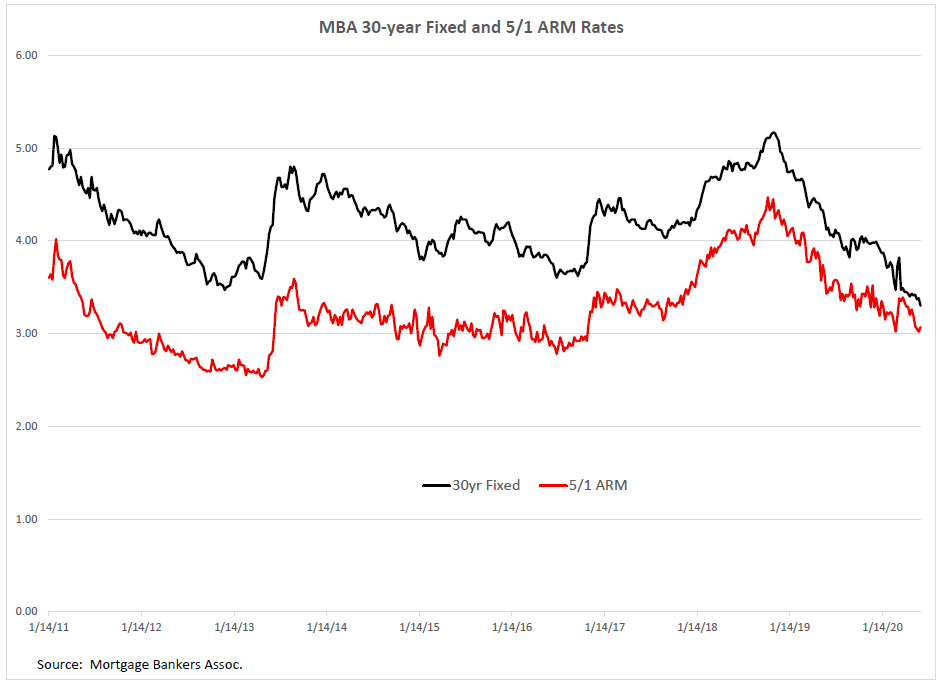 Click to enlarge One question arises from these data, however:  given the relative levels of the survey rates, why would anyone take an ARM these days?  One factor is the fragmented nature of the ARM market, which differs structurally from the market for fixed-rate loans.  Unlike the fixed-rate market, which is both fairly uniform and driven largely by securitization practices and prices, the ARM market is essentially bifurcated between mortgage bankers and depositories.  Mortgage bankers securitize virtually all their production, and their pricing is strongly influenced (if not dictated) by securities prices; by contrast, depositories are able to hold their production in their portfolios.  Banks and credit unions typically like holding the ARM product, as it fits their interest rate risk profiles better than fixed-rate mortgages.  As a result, it’s often possible for borrowers to find “special” quoted rates from depositories that are well below the ARM survey rates and, by implication, those offered by mortgage bankers.

This in turn raises a number of questions with respect to the future of the ARM product, especially as LIBOR-and CMT-based products are phased out by Fannie Mae and Freddie Mac.  It is entirely possible that the market for ARMs evolves into one dominated by depositories and portfolio lenders, as they will have the freedom to offer products and features not available to lenders subject to agency specifications.