MBS performance was mixed last week.  Over the past five sessions, Fannie 2s cumulatively matched their 10-year duration-adjusted performance, while fuller coupons lagged the Treasury by 1-4 ticks.  Ginnies were mixed on the week, with GNII 2.5s tracking the 10-year while GNII 3s managed to outperform 10s by 5/32s.  Coupon swaps compressed as rates dropped; the Fannie 2.5/2 swap narrowed by almost a half point, while the 3/2.5 and 3.5/3 swaps contracted by 7-8 ticks.  Rolls remain special; even with June Class A settlement out of the way the Fannie 2 roll (July/August) is offered 4/32s special, while Ginnie II 2.5s and higher are rolling as much as 5+ special.

Application activity has continued to rebound, even as some parts of the country struggle to contain new outbreaks of the novel coronavirus.  For the week ending 6/5, the MBA’s refi index rose for the first time since early April, while the purchase index rose for the eighth straight week.  The accompanying chart shows that purchase activity has rebounded strongly from its nadir in early April. 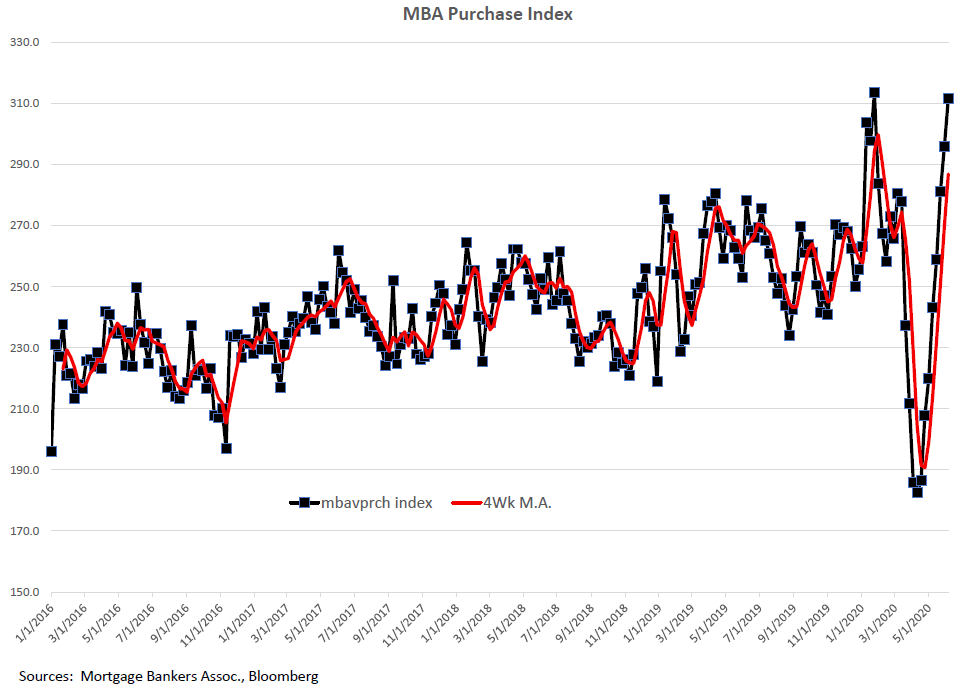 Click to enlarge While the current level may be inflated due to pent-up demand, it suggests that the real estate industry has either adapted to the new health restrictions or is ignoring them.  (Hopefully not the latter.)

Demand for houses appears strong, however, highlighted by a report from Redfin indicating that demand for home continues to strengthen while inventory levels remain low.  (Thanks to Brent Nyitray for the post.)  While the report also suggests that “credit has pretty much loosened up except for self-employed borrowers,” easier credit is not yet reflected in the MBA’s indices of credit availability, which have stabilized but still reported lower for May, as shown in the chart below. 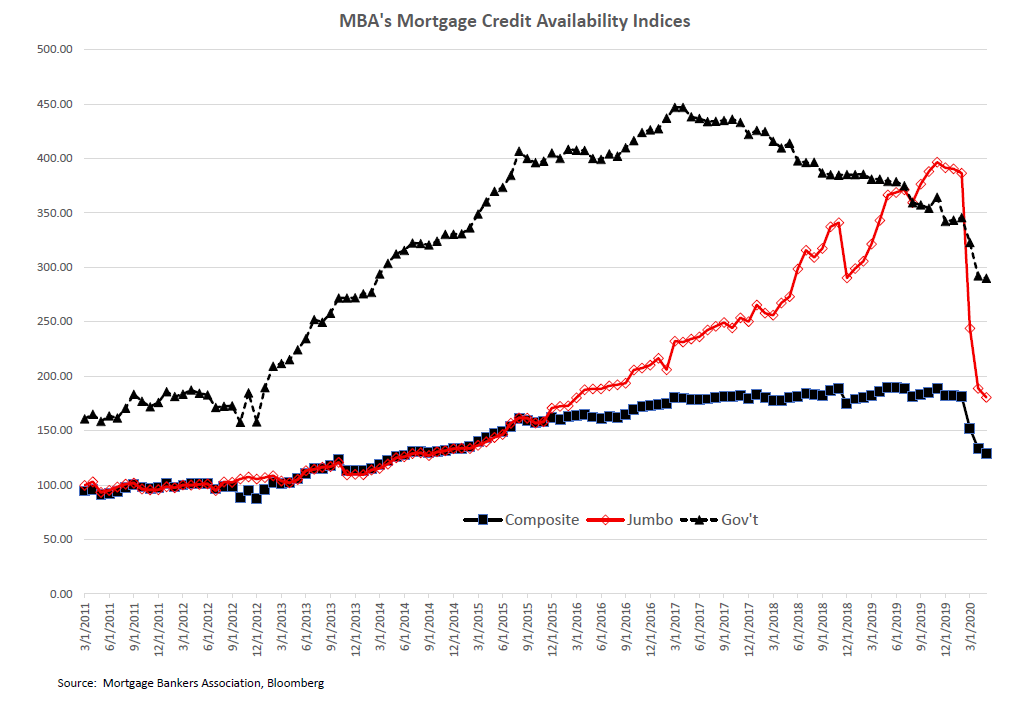 Click to enlarge However, the indices are consistent with reports that the housing market is much healthier for moderately-priced homes than for properties at higher price points where a jumbo loan may be necessary; the May jumbo index reported roughly 53% lower than its February level.

The FHFA issues a press release which indicated that they will not be proceeding with the changes to pooling and trading practices that they proposed late last year.  The proposed changes, issued in the form of a Request for Input (RFI), included:

The announcement was rather oblique; the press release merely stated that “[A]fter careful review of the comments received in response to the RFI, FHFA has directed the Enterprises to further align their practices for evaluating seller and servicer prepayment related activities.”  It was followed by a list of fairly innocuous activities and enhancements to prepayment measurement and reporting, some of which are already being performed under the Final Rule issued in 2019.

As we discussed in our 12/20/19 Commentary, the proposed changes were unnecessary and disruptive, and would not have served to further align the prepayment performance of pools issued by Fannie Mae and Freddie Mac.  One interesting development is that the specified pool market has already evolved organically to include categories for maximum $200K and $225K loan balances, categories that probably would not currently be traded if new specified pool categories required regulatory approval.