30-year Fannie and Ginnie MBS lagged their Treasury hedge ratios last week.  Lower-coupon 30-year UMBS trailed the 10-year by around 3/8ths of a point, while fuller coupons either underperformed modestly or managed to track 10s, while Ginnie performance was mixed, with GNII 3s lagging 10s by over 12/32s while other coupons (including benchmark GNII 2.5s) trailing by around 5/32s.  The Fannie and Ginnie current coupons spread over Treasuries (which are heavily skewed toward the performance of the lowest tradeable coupon) barely budged last week.  Coupon swaps were mixed; the Fannie 2.5/2 swap contracted sharply, as Fannie 2s performed well last week, while the FN 3.5/3 swap expanded from a very tight 4/32s to close around 12/32s.  Several Ginnie dollar rolls remain quite special, with the GNII 2.5 May/June roll closing on Friday at just under 9/32s (and is offered this morning at around 10+ or the equivalent of a -1.70% financing rate).

The Fed continued to scale down its purchases to a daily average of $4.8 billion but notably began to purchase 30-year Fannie 2s, buying $240 million every day last week.  Their purchases coincided with a spike in trading activity for the coupon, as illustrated by the accompanying chart. 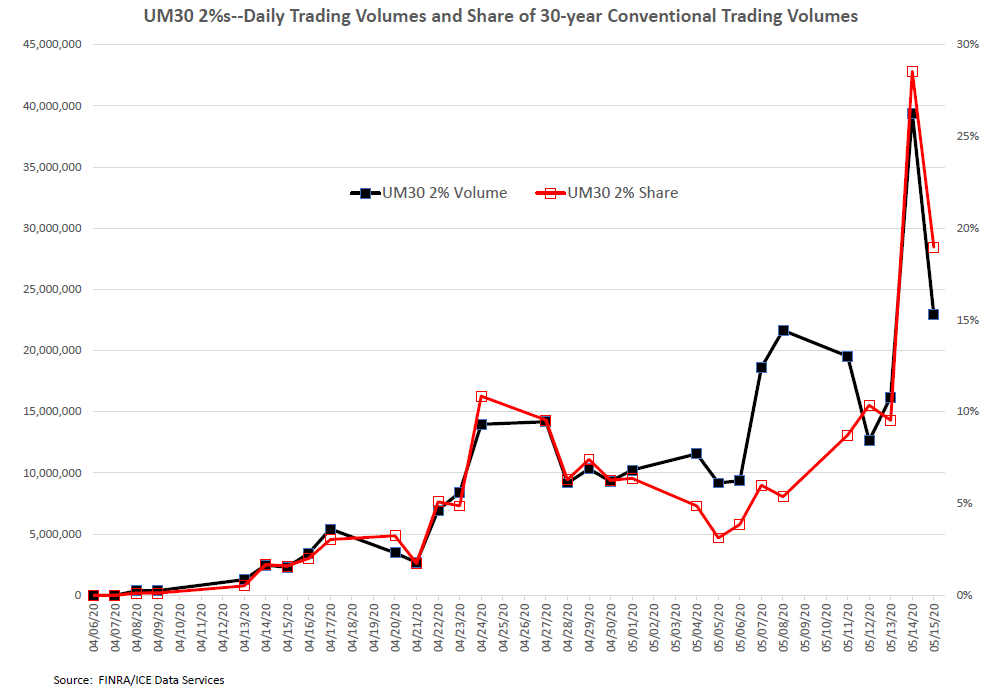 Click to enlarge It shows both daily trading volumes for 30-year Fannie 2s since early April (when TRACE first started breaking out trading in the coupon) as well as their share of 30-year conventional volumes.  The graph indicates that the amount of Fannie 2s being traded spiked on Thursday to around $39 billion, a huge number given that none were traded at the beginning of April; Fannie 2s as a percentage of total 30-year conventional volume also spiked to almost 30% that day.  This contrasts with the relative odd lots being traded in Ginnie II 2s, markets for which only recently began to be displayed on Tradeweb.

One other interesting development that we’ve been watching are conditions in the market for options on swaps, or “swaptions.”  These contracts trade either on Swap Execution Facilities (SEFs) or over-the-counter, and the market is unique in that traders can trade options for both a variety of swap maturities (or “tenors”) as well as for different option expirations (or “expiries”).  This is different from the market for exchange-traded Treasury futures options with which most mortgage and MBS traders are familiar since it’s difficult to buy contracts that expire more than 6-9 months in the future.  By contrast, swaptions can be traded for expiries as short as one month and as long as five years in the future for swap maturities ranging from 1-30 years.  (As an example, recent pricing is shown in the table below; note that prices are quoted in the form of “implied volatilities,” or a volatility input that equates the model values to market prices.)  While most pipeline hedgers don’t trade swaptions, the market gives some useful and telling information and clues to fixed-income traders across sectors.

Click to enlarge As an example, it’s useful to look at the relationship of pricing for different expiries for the same swap tenor.  Option theory suggests that there is a term structure to the option market resulting from the different ways traders use the product to manage their exposures.  Generally, trading in short-expiry options is done to manage duration variations as market prices change (generally referenced in option theory with the Greek letter “gamma”), while longer expiries are more closely associated with the perceived general level of market volatility and referenced as “vega.”  Short-expiry options generally trade cheaper than longer expirations, except during turbulent markets where traders are struggling to manage their positions and use short-expiry options to adjust their duration exposures.  (Gamma can be interpreted as option-speak for the negative convexity of virtually all mortgages and MBS due to their embedded prepayment options.)  One way to track this phenomenon is to look at the relative prices that short- and longer-expiry options for the same swaption tenor are trading, a metric sometimes called the “gamma/vega percentage.”

The chart below highlights the close relationship between this metric (measured as the ratio of the implied volatility for the 3-month and 3-year expiries for a 10-year swap, which generally stays in a range between 90-100%) with the actual or “realized” level of volatility over time, using a 40-day trailing standard deviation of daily yield changes.  The gamma/vega percentage spiked to almost 190% at the height of the crisis (and market volatility) in March, indicating that traders were paying very high prices for short-dated options that they used to manage their gamma (i.e., convexity).  The gamma/vega percentage is useful as a way of gauging the true measure of duress in the market, as expressed by what traders are actually willing to pay to protect their positions from swings in their position’s interest rate exposures.  It’s notable that the percentage has dropped back to around 100% at the same time that realized volatilities are moving back to pre-pandemic levels last seen in mid-February. 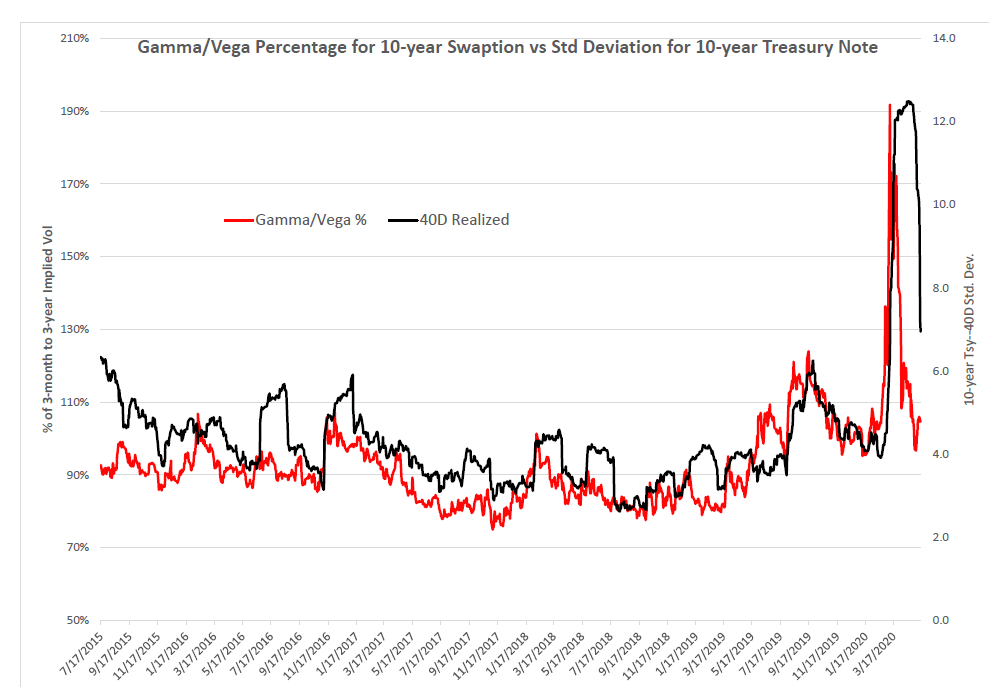 Click to enlarge We won’t publish a commentary next week…best wishes for an enjoyable and safe holiday.