Most MBS lagged their Treasury hedge ratios last week. UM30 2.5s through 3.5s trailed the 10-year by as much as 7/32s, although 4s had a fairly good week, outperforming 10s by 3/32s.  The Ginnie II market exhibited a strong up-in-coupon bias, with GNII 2.5s and 3s trailing the 10-year by 13/32s while 3.5s and higher outperformed by as much as 20+ ticks.  Even though funding rates (represented by 1-month LIBOR) continued to decline, a number of lower-coupon rolls are trading well through their break-even values.  Most notably, the UM30 3 May/June roll strengthened prior to Class A notification, while GNII 2.5s and 3s are (at around 8/32s) rolling as much as 3+ ticks special.  (It’s notable that the Fed’s Ginnie purchases last week were all for June settlement; it appears that they’re trying to at least keep the May/June rolls in check.)

The Fed bought between $4.5 and $6.1 billion of MBS each day last week, and while they continue to reduce their (scheduled) maximum daily purchases to something around $5 billion, for the first time they are scheduled to buy 30-year UM30 2s, a major step in improving the pricing and liquidity of that coupon.  (Note that until late last year they hadn’t bought any 30-year 2.5% coupons since May of 2013, so this schedule represents a major departure.)  Daily purchases of $5 billion would get the Fed back to buying the $20-22 billion per week that they bought in early 2013 when “quantitative easing” was initiated, and (as indicated by the graph below) is orders of magnitude lower than the $157 billion they bought for the week ending 3/25. 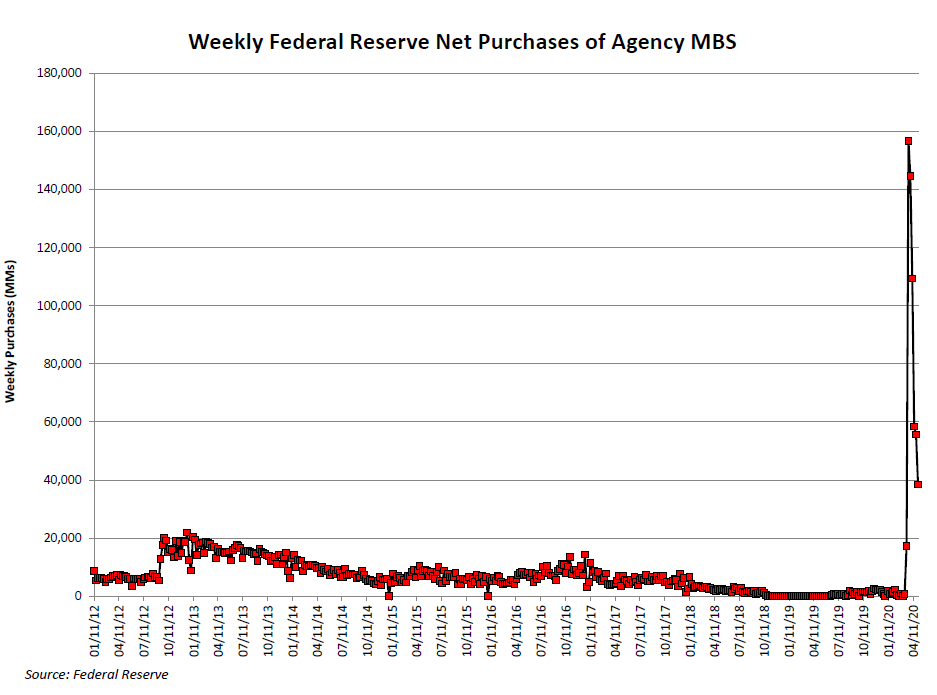 Click to enlarge A separate development was Bloomberg’s changes to their TBA deliverable assumptions.  (These are sometimes referenced as the “cheapest to deliver,” borrowing the term used in the futures markets, although Bloomberg calls them their “worst to deliver” or W2D.)  These represent their estimation of the composition of the pools that Bloomberg expects would be delivered against open TBAs, including their age, their weight average note rates (WACs), loan sizes and other variables.  W2Ds reflect the fact that many loans get pulled out of the TBA population and are pooled and sold separately as specified pools, making the pools actually delivered against open TBAs “adversely selected” and thus more responsive to refinancing incentives.  (Faster prepayments in a market where lower coupons are trading in excess of 103-16 are clearly not desirable.)

These changes, in turn, changed Bloomberg’s model output, and (from the standpoint of pipeline hedgers) most notably the durations for lower-coupon Ginnie Maes.  Bloomberg’s Ginnie model had, somewhat bizarrely, begun generating negative durations for GNII 2.5s through 3.5s in mid-March, in part because of the extremely fast and anomalous prepayment speeds that Ginnies have exhibited for the last few years.  Negative durations for bonds imply that prices are expected to decline as interest rates drop and/or rise as rates increase, a very abnormal condition normally seen for interest-only securities and MSRs.  (It was also not supported by other measures, including empirical or regression-based durations, which remained solidly positive).  Since pipeline hedging models do not give reasonable results when negative durations are used, we instead used a fraction of the Fannie durations for the affected Ginnie coupons.

The chart below shows the prices that the model generated for +/- 25 basis point changes for GNII 2.5s on 4/28 (when the duration was slightly negative) along with those using Friday’s closing market, where the duration reported at a positive 1.4. 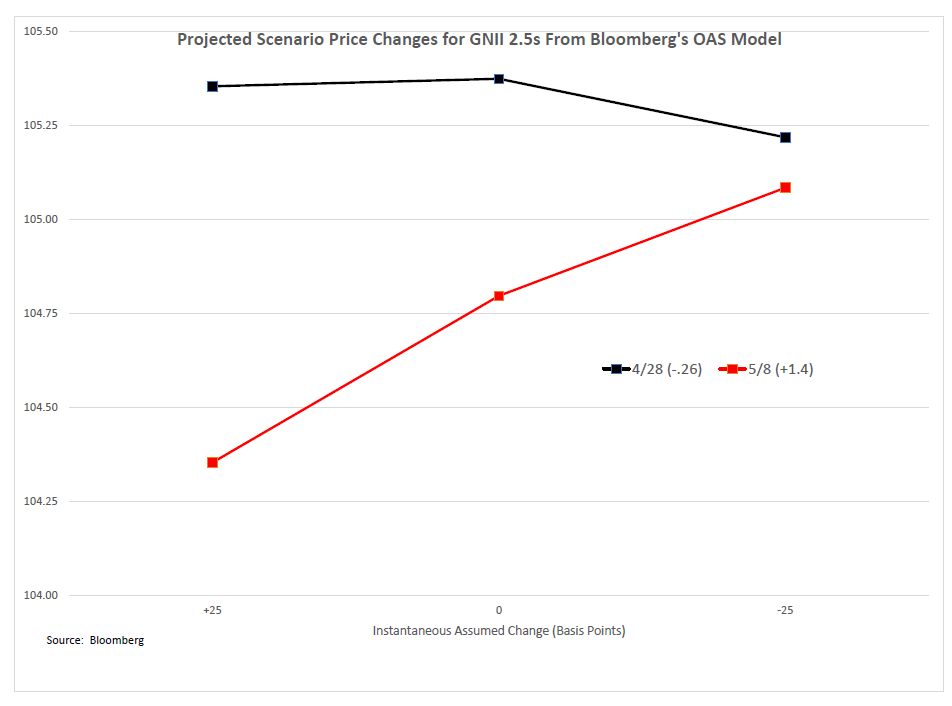 Click to enlarge According to Bloomberg, the duration changes were due entirely to changes in the W2D assumptions, as they did not alter or update any other components of their models.  If nothing else, this episode highlights the vigilance that analysts and traders must employ in making sure that model outputs are sensible and useable, particularly during times of market distortions and stress.