The Treasury market took a breather last week, leaving yields little changed.  At 0.614%, the 10-year note’s yield closed a little over a basis points higher than the previous Friday’s level, while the 2-10 spread steepened by about 5 basis points, as the curve “twisted” mildly around the intermediate maturities.  With Treasuries settling into trading ranges, their realized volatilities have started to decline.

This is illustrated by the accompanying graph, which shows the daily realized volatility of the 5- and 10-year notes using a 40-day lookback.  (The 10-year’s 11.9 basis point level for 5/1 was calculated using daily price data back to March 6, which means that the extreme volatility experienced in late February and early March is starting to drop off the 40-day sample.) 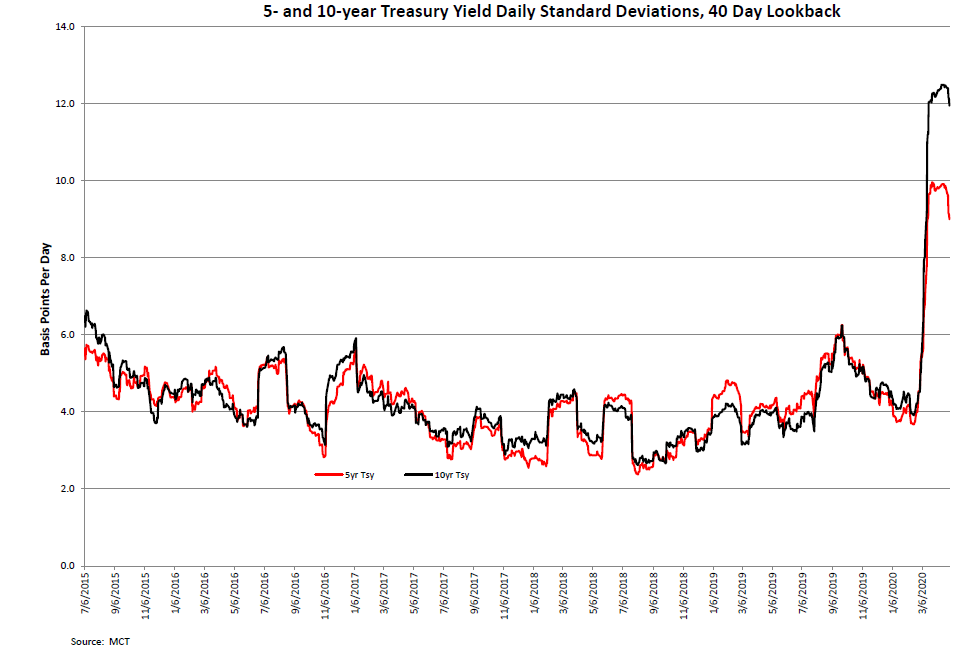 Click to enlarge One other notable development has been the decline in LIBOR rates.  Since the middle of April, 1-month LIBOR has declined by roughly 50 basis points, reflecting improving market conditions and more confidence in unsecured lending.  Note that lower funding rates have provided additional support to the MBS dollar roll market; for example, a 50 bp decline in funding costs on a 30-year TBA with a 2.5% coupon is worth roughly an additional 1+ ticks in the break-even roll value.

MBS performed fairly well last week, as the market experienced a decided up-in-coupon bias.  30-year Fannie 2.5s outperformed their 10-year hedge ratios by a cumulative 2/32s over the last five sessions, while 3s and higher ended the week between 5-7 ticks ahead of the 10-year.  Ginnies had an even more pronounced bias; GNII 2.5s outpaced the 10-year by 3/32s while GNII 3s through 4s outperformed the Treasury by between 10 and 14 ticks.

Using our normal value metric, the Fannie current coupon spread reported 20 basis points tighter to interpolated Treasuries on the week, and (as shown in the graph below) the spread is approaching the level that it reported earlier this year.  However, rather than a measure of improved sentiment, the sharp tightening of the index reflected distortions in how the measure is calculated and highlights the risks of using such metrics as measures of “spread” and “relative value.” 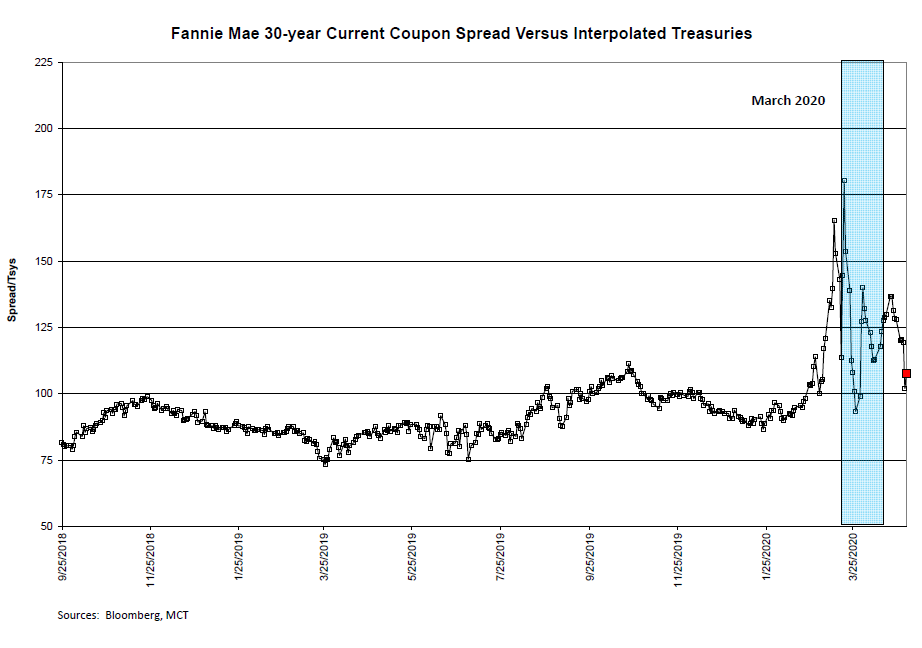 Click to enlarge The current coupon rate is normally an interpolation between the coupon rate of MBS above and below “parity” (i.e., par with an adjustment for delay days and payment frequency), but when there are no discount coupons Bloomberg takes the lowest liquid coupon and calculates its yield based on the “median PSA” (i.e., prepayment speed) provided to them by a survey of dealers.  This yield (adjusted for settlement days) is reported as their “current coupon rate.”  Two things happened recently to grossly distort their current coupon calculation:

These types of issues are one reason that we have on occasion used the Fannie Mae commitment rate as a proxy for MBS spread, although there is no measure that isn’t subject to some degree of distortion over time.  This episode also highlights the treacherous nature of using TBA “yields” and “spreads” as a measure of relative value and performance in the MBS sector.