The Treasury yield curve underwent a “twist” last week, as shorter maturity yields rose modestly while yields on longer Treasuries declined.  The 10-year yield ended the week at 0.60%, lower by about 4 basis points, while yields on 2- through 5-year notes rose between 1.5 and 2 bps.  The 10-year appears to be settling into a trading range of around 0.50-0.80%, while its 60-day standard deviation is also stabilizing at a little over 12 bps per day, and should start declining as the very volatile March sessions start to roll off.

MBS levels and spreads also began to stabilize last week.  The 30-year Fannie current coupon spread over Treasuries narrowed by about 2 basis points, while the Ginnie spread widened by 8 basis points.  There were, however, some noteworthy developments in the space.  The Fed ramped down their purchases of MBS to a daily average of $9.2 billion versus the previous week’s $13.6, and is scheduled to further reduced their purchases this week to somewhere between $7-8.5 billion per day.  For a slightly different perspective, the table below shows the Fed’s weekly purchases by product and coupon since the end of February, reported from Thursday through the following Wednesday. (For example, the top row shows purchases for the period between 4/16-4/22.)  Despite the reduced Fed support, the sector performed reasonably well; UM30 2.5s tracked the 10-year note last week, duration-adjusted, although 3.5s had a rough week, cumulatively trailing 10s by about a quarter point.

Click to enlarge Dollar rolls closed out the week mostly muted, with the exception of the GNII 2.5 May/June roll, which (at over 8+) is about 4+ ticks special.  Both the conventional and government coupon stacks had some noteworthy changes.  All liquid Ginnie II coupons (2.5s through 4s) ended the week with the same 105 handle, while the UM30 3.5/3 swap ended the week at 2/32s, while the 4/3.5 swap closed at 1 point.  (This also reflected the weak performance of conventional 3.5s noted above.)  The accompanying chart highlights how cheap the 3.5/3 swap is relative to the 10-year Treasury yield, and how poorly it has performed over the last week or so.  (UM30 3.5s’ front roll is trading at -2/32s, a sign of raging prepayment fears, but in fairness the UM 4 roll is also negative.) 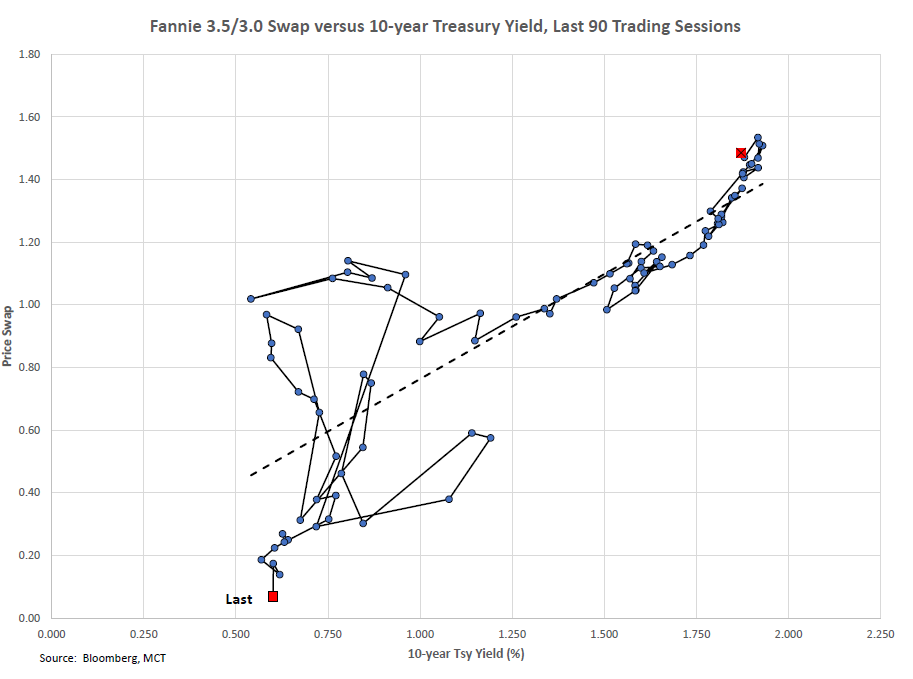 Click to enlarge One other noteworthy development was the sharp pickup in UM30 2% trading activity.  As shown in the accompanying chart, daily trading activity in 2s ramped up from virtually zero at the beginning of the month to around $13 billion last Friday, where it comprised over 10% of total conventional volumes.  If this represents continued (if reluctant) acceptance of the coupon, it has very important implications for the loan market.  When the lowest TBA coupon traded is UM30 2.5s, that means that the lowest rate that lenders will offer on conventional conforming loans (virtually all of which are securitized) is generally 2.75%; since 25 basis points of servicing needs to be held, a lower note rate is basically an orphan and can’t be securitized.  If, however, UM30 2s start to be viewed as a liquid coupon, then loans with lower rates can be originated and securitized.  This won’t dramatically impact the “average” level of mortgage rates which, depending on who you talk to, is between 3.33% and 3.45%.  It will, however, open up lenders’ rates sheets to showing pricing and offering lower note rates, which could eventually pressure the overall levels of lending rates lower. 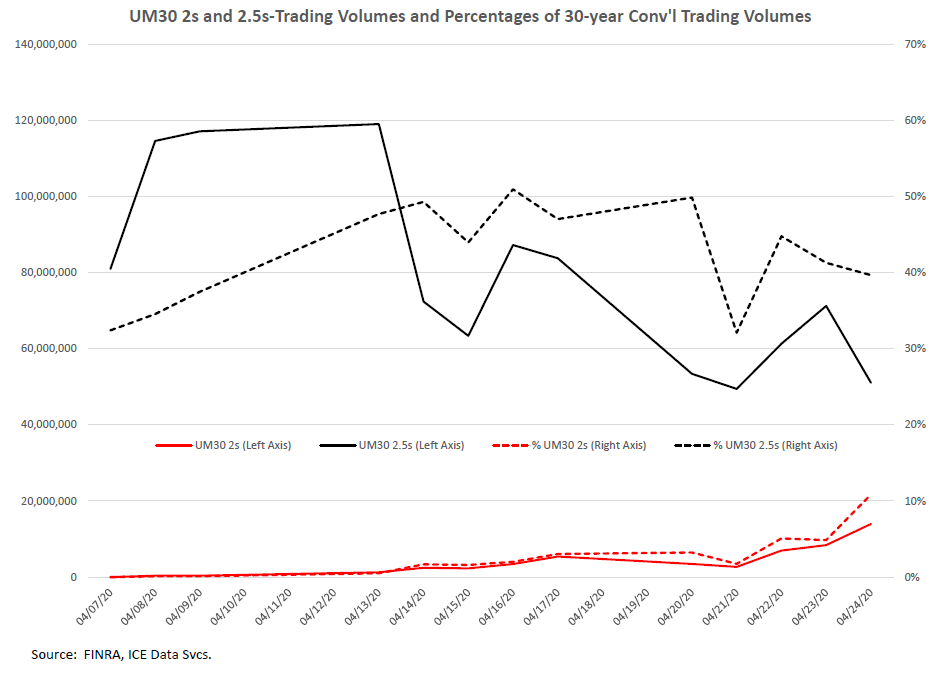