Intermediate and long Treasury yields declined last week, as the Treasury market looks to be settling into a trading range after a period of extreme volatility.  The 10-year yield dropped by about 8 basis points, leaving the 2-10 year spread narrower by about 6 basis points.  The decline in the 10-year yield reflected a sharp decrease in the 10-year TIPS break-even (i.e. the projected future inflation rate), which moved in sympathy with weakness in oil prices.

MBS struggled last week, as the Fed tapered back its purchases of the product amid continued weak institutional demand.  The conventional and FHA 30-year current-coupon spreads widened by 17 and 18 basis points, respectively, while the 15-year conventional spread over the 5-year closed about 27 bps wider.   The most liquid coupons (FN/G2 2.5s and Dwarf 2s) trailed their Treasury hedge ratios by over three-quarters of a point.  Both the 30-year Fannie and GNII 3.5/3 coupon swaps remained under severe pressure; the Fannie 3.5/3 swap closed at 8/32nds, while the GNII swap moved back to -18/32s, closing in on its worst level of -28 ticks that it reached in March.

Fed purchases were more than $14 billion lower from the prior week despite reflecting a full five days of purchases.  The table below shows the Fed’s purchases by product and coupon; they basically reduced all their purchases except for Fannie 2.5s and (to a lesser extent) 15-year 2s and 3s. 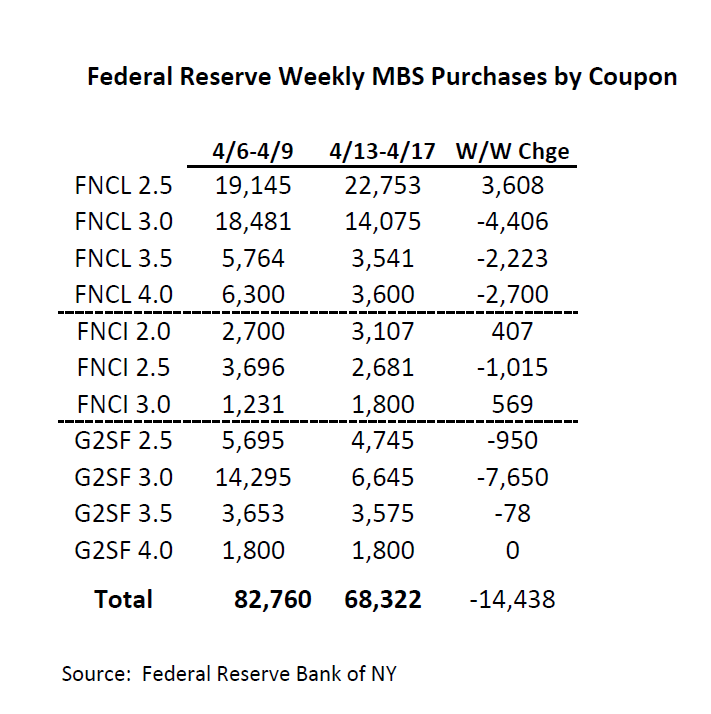 Click to enlarge Their average daily purchases dropped from over $20 billion to roughly $13.6 billion.  Their activity arguably reflected the desire to find the “right” level of purchases to keep the market stable (and liquidity healthy) without pushing prices inordinately higher.  The Fed is planning to further reduce its daily purchases this week to something in the area of $10-12 billion, which hopefully will continue to support the sector without causing prices to spike.

One interesting development last week was the uptick in conventional 2% trading.  FINRA only starting breaking out trading in UM30 2s on 4/9; prior to that, they only listed “<=2.5%” on their daily reports.  Trading rose from virtually zero at that point to over $5 billion on Friday, and while that pales beside the respective $84 billion and $50 billion recorded for UM30 2.5s and 3s it still represented an impressive total, especially since about $3.2 billion was in specified pools (versus the $6-7 billion in conventional 2.5s and 3s).  A key question remains whether the Fed will ever purchase the coupon; they only began purchasing 30-year 2.5s late last year after eschewing them since 2013.

Finally, overall application activity remains fairly robust in spite of the pandemic-induced spike in unemployment and the resulting weak purchase market.  The chart below shows the MBA’s composite (i.e., total) application index, re-indexed so that the first quarter of 2015 represents a level of 100.  The chart indicates that while overall application activity is about 35% off its early March highs it is still about 82% than its average from September 2013 through the end of 2019.  This suggests that once the backlog of locks in lenders’ pipelines clears out there should be a lot of refinancing business to be done at the current all-time low levels of mortgage rates. 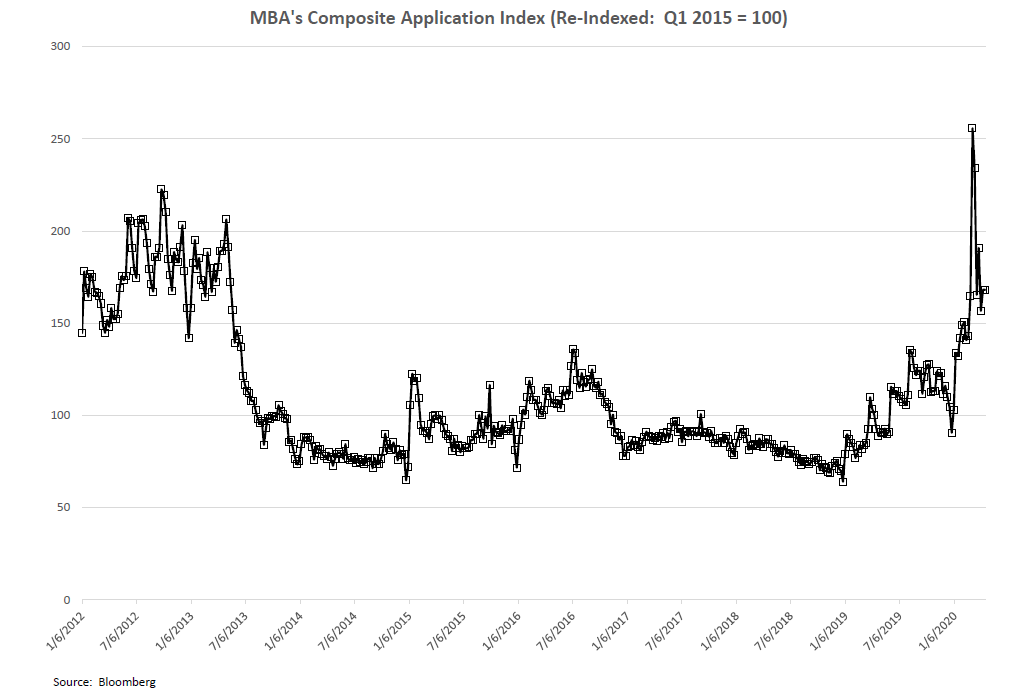