Intermediate and long Treasury yields declined last week, although the extreme volatility in Treasury yields experienced over the last month dissipated a bit.  The 10-year Treasury yield ended the week at just under 0.60%, while short yields either closed roughly unchanged (the 2-year note) or rose.  (T-bill yields ended the prior week slightly negative, so the increase in the 3-month bill yield to 9 basis points was somewhat welcome.)  The back-end rally reflected declining long-term real rates, as the yield on the 10-year TIPS dropped by 15 basis points while the Break-even rate (reflecting expected future inflation) rose by 7 basis points, suggesting that traders are not yet incorporating deflation fears into their thinking.

The MBS market remains volatile, and levels continue to disassociate from the Treasury market.  This is illustrated by the accompanying graph, which shows the daily Fannie Mae current coupon spread over interpolated Treasuries.  The highlighted section shows the spread since the beginning of March, and exemplifies how volatile the spread has been after a long period of relative stability.  The spread ended the week 34 basis points wider, and it appears that an equilibrium level is starting to be carved out around the +125 basis point level.  The 30-year Ginnie current coupon spread only widened by about 12 basis points, and fuller-coupon Ginnies had a strong week, outperforming their 10-year hedge ratios by as much as 20/32s. 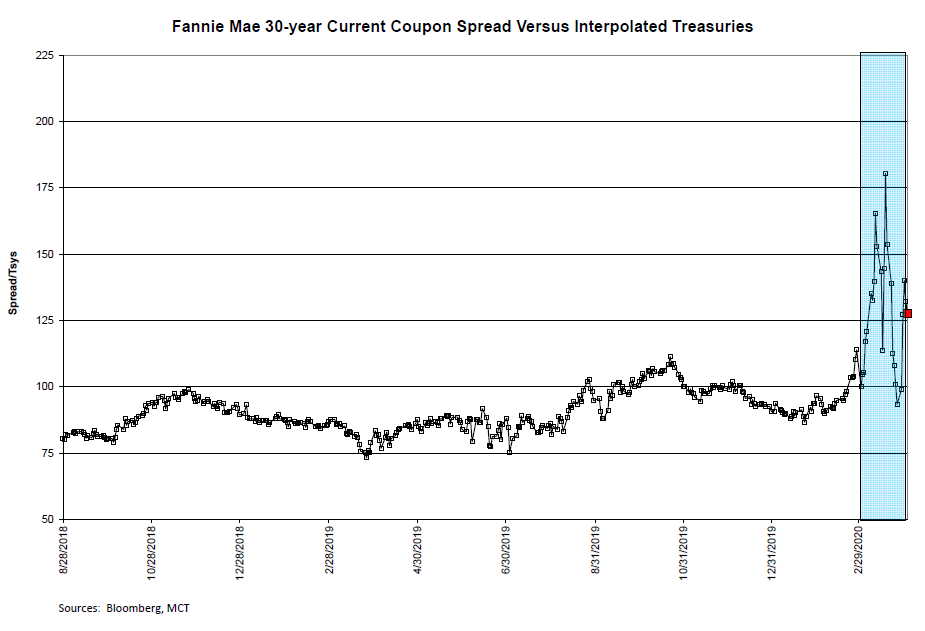 Click to enlarge Levels in the MBS sector continue to be moved by Fed purchases.  The Fed scaled down its purchases slightly last week; while their calendar showed maximum daily activity of $40 billion, the Fed purchased between $19.5 and $27.4 billion per day.  An interesting observation is that the Fed’s purchases have diverged from overall daily trading activity.  An example is shown in the table below, which compares the percentage of 30-year conventional coupons the Fed purchased last week to the proportions of actual trading volumes reported by TRACE for last week.  Whether or not this is intentional, the Fed is clearly supporting fuller coupons such as UM30 3.5s and 4s while buying a disproportionately small amount of 2.5s despite their large share of daily trading volumes. 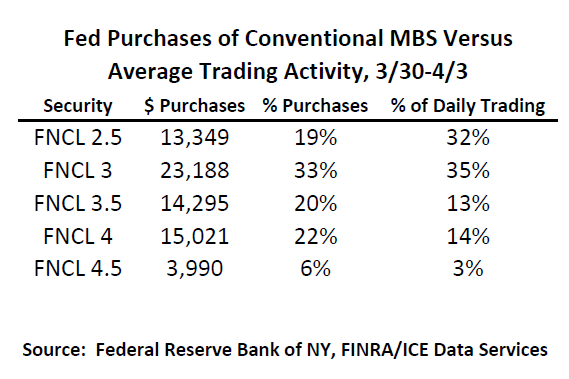 Click to enlarge Much has been written on the issues associated with servicer advances and loan forbearance.  Rather than belabor the point, please read the editorial written by former MBA David Stevens that was published over the weekending in Housing Wire (accessible here).

The transition away from LIBOR to SOFR, scheduled to officially take place early next year, has been placed on the back burner in the current market but should get some attention from forward-looking lenders and traders. Both Fannie Mae and Freddie Mac have recently announced that they will cease purchasing ARMs indexed to LIBOR by the end of this year, and have targeted the second half of the year for purchasing loans indexed to SOFR, with most loans expected to reset semi-annually to a 30-day moving average of the rate.

The current difficulties have exacerbated the problems associated with the transition.  While LIBOR is an unsecured rate, SOFR (i.e., “secured overnight financing rate”) is based on transactions secured by collateral.  The spread between the two rates should theoretically widen out during financial market dislocations and crises, and we are seeing that happen in the current market; while 6-month LIBOR is currently posted around 1.20%, SOFR is trading at 0.01% (i.e., 1 basis point).

The decoupling of the two rates, which have rarely tracked each other well since SOFR’s introduction in 2018, creates major questions for lenders attempting to market adjustable-rate loans; for example, what is the “right” spread for a SOFR-based loan?  A spread of 225 basis points has long been a standard for ARMs that reset annually off 12-month LIBOR, but as the graph below indicates, there was little or any consistency between LIBOR and the moving average SOFR in a stable market; trying to establish a workable spread for Moving Average SOFR loans based on the relationship between the two rates is a fruitless exercise.  The uncertainties are arguably being reflected in the declining share of ARM applications in the market, which recently reached its lowest level since 2013, as reasonable lenders are clearly hesitant to aggressively offer a product with huge uncertainty surrounding a very basic product feature. 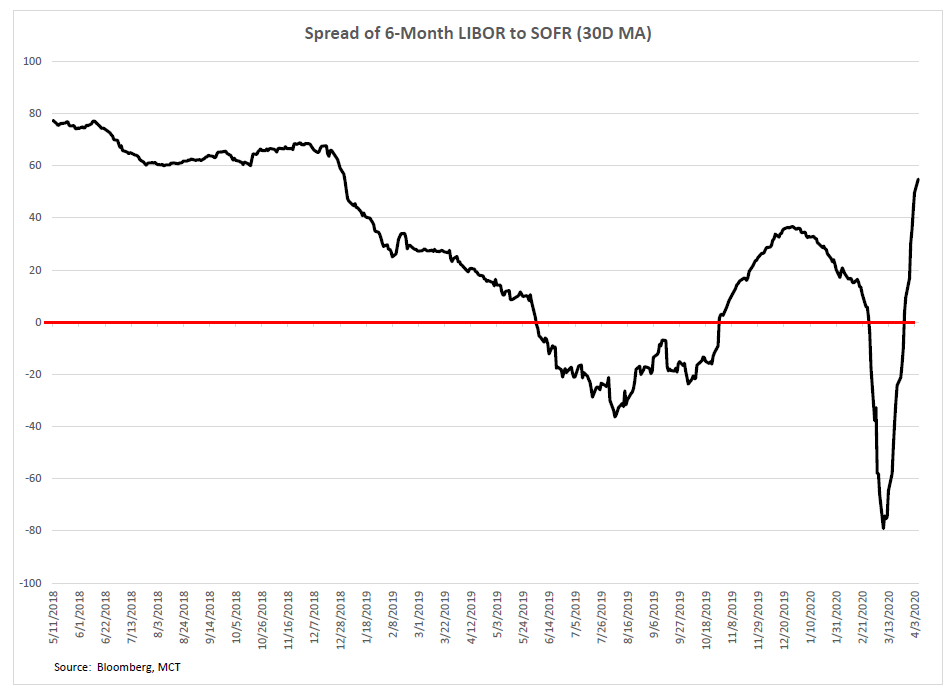