Treasury yields ended the week lower, although prices spent most of the week in negative territory before a big rally on Friday took the 10-year yield to its lowest level since 3/9.  With Treasury bills carrying negative yields for much of the week and the 2-year note pegged in place at around 0.25%, the decline in yields was focused in intermediate and long maturities, leaving the 2-10 year spread flatter by about 10 basis points at +43 bps.  (However, if anyone in the future cites last year’s mild yield curve inversion as a factor in the recession we’re likely to see later this year, please instruct them on the concept of “social distancing.”)

The bigger stories, however, were in the mortgage space, where the Fed used its immense buying power to push MBS prices sharply higher and well in excess of their Treasury hedge ratios.  Even though hedge ratios are extremely short (and, for Ginnies, some coupons had negative effective durations in the Bloomberg model this morning), the sector’s performance was still head-snapping, with almost all coupons outperforming Treasuries by over two points on the week.  (Dwarf 2s actually outperformed the 5-year note by over 3 points, using a 55% hedge ratio.)  As a glimpse at the market profile indicates, the Fannie current-coupon spread over Treasuries gapped 60 basis points tighter last week, an enormous move that took spreads back to their mid-January levels.  (Note that this is a spread for conventional MBS, not for loans; the 30-year primary/secondary spread gapped wider by over 50 basis points on the week, reflecting originators’ need to address capacity issues by adjusting margins.)

The biggest factor in the sector’s performance clearly was the Fed’s intervention in the market, which saw them buying upwards of $40 billion a day all last week.  The scale of their intervention can best be viewed in the context of their previous purchase activity, as illustrated by the chart below.  The chart shows the Fed’s weekly purchases (Thursdays through Wednesdays) starting in early 2012; even after the initiation of QE3 in the fall of that year, they never bought more than about $22 billion in any single week, until the week from 3/19/20 through 3/25/20, where they purchased over $156 billion.  While the Fed may be scaling back their purchases a bit (their calendar now calls for maximum daily purchases of $40 billion, compared to last week’s $50 billion) they still are buying more on a weekly basis than the month-to-date gross issuance (i.e., excluding principal paydowns) of the sector in March, according to eMBS.  This level of purchases is unsustainable and, in my view, contrary to their stated purpose of bringing liquidity to the sector.  A key issue for the market will be how the Fed eventually scales back its purchases (and communicates its intentions) and whether they can do it without causing prices to sink and whipsawing the market again. 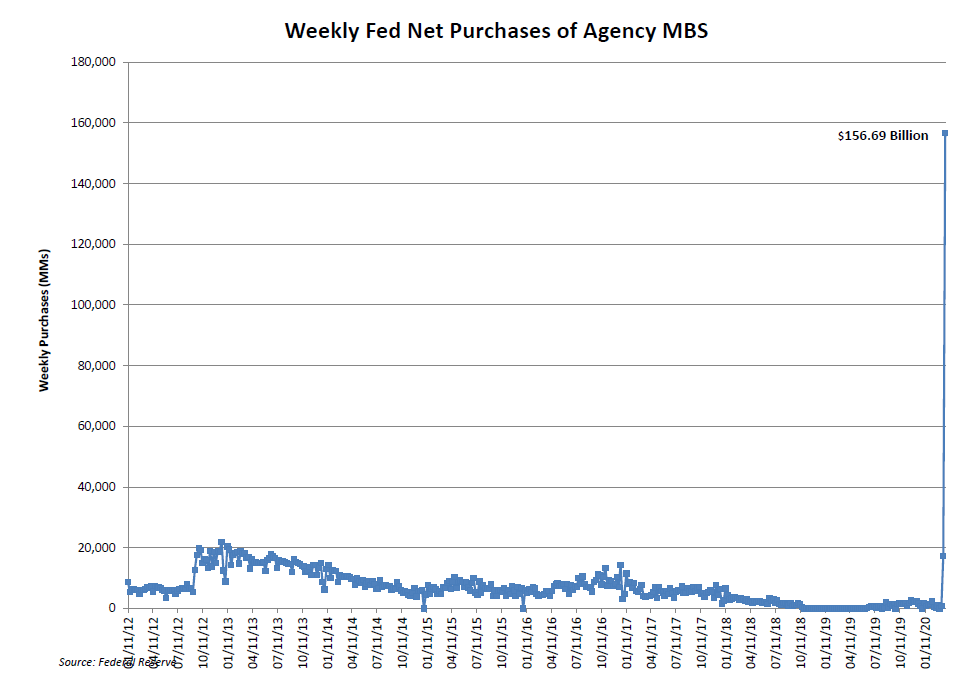 Click to enlarge Mortgage market participants remain hugely concerned with the liquidity of servicers, especially non-bank servicers in government loans.  Ginnie Mae announced a “Pass-Through Assistance Program” over the weekend that is designed to help servicers fund advances for both elevated delinquencies and borrowers availing themselves of various forbearance initiatives.  As indicated in the announcement (which can be accessed here), a change from earlier programs that were activated after the hurricane and flooding issues in 2017 is that accessing funding under the program will not be considered an “event of default,” although other program requirements remain in effect.  (This is in addition, and possibly as a supplement, to programs formulated by the task force formed by Treasury Secretary Mnuchin which is scheduled to announce their findings today [Monday 3/30].)

One other development over the past few weeks was the collapse in payups for specified pools and loans with favorable prepayment characteristics.  As an example, Bloomberg’s pricing group shows that payups for $150K maximum balance UM30 3.5s dropped from about 4 points on 3/11 to a little over a point on 3/27, while payups for $85K max UM30 4.5s are down by about 5 ½ points (!).  Specified loan pricing has also taken a hit.  The chart below shows the difference in Fannie cash window prices between generic and $150K max balance loans with 3.875% and 3.375% net note rates over the last few weeks, and highlights the pressure on payups during a refi wave that would normally result in healthy premiums for prepayment-advantaged products. 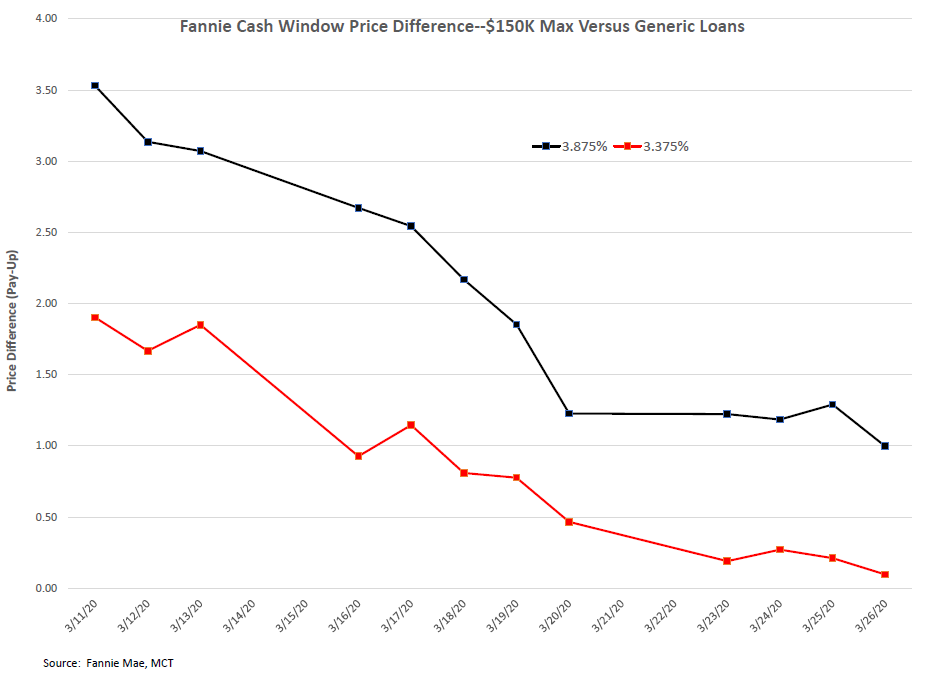 Click to enlarge The sharp drop in payups is, according to most observers, due to huge REIT liquidations over the past few weeks, as many shops sold their most liquid positions to quickly improve their balance sheets and cash position.  This is consistent with the sharp increase this month in specified pool trading activity, highlighted on the accompanying chart.  The chart shows daily specified pool trading volumes reported on TRACE since last summer, and highlights the huge volumes of specified pools that changed hands in March (highlighted in blue), especially in the middle of the month with multiple days of over $50 billion in activity. 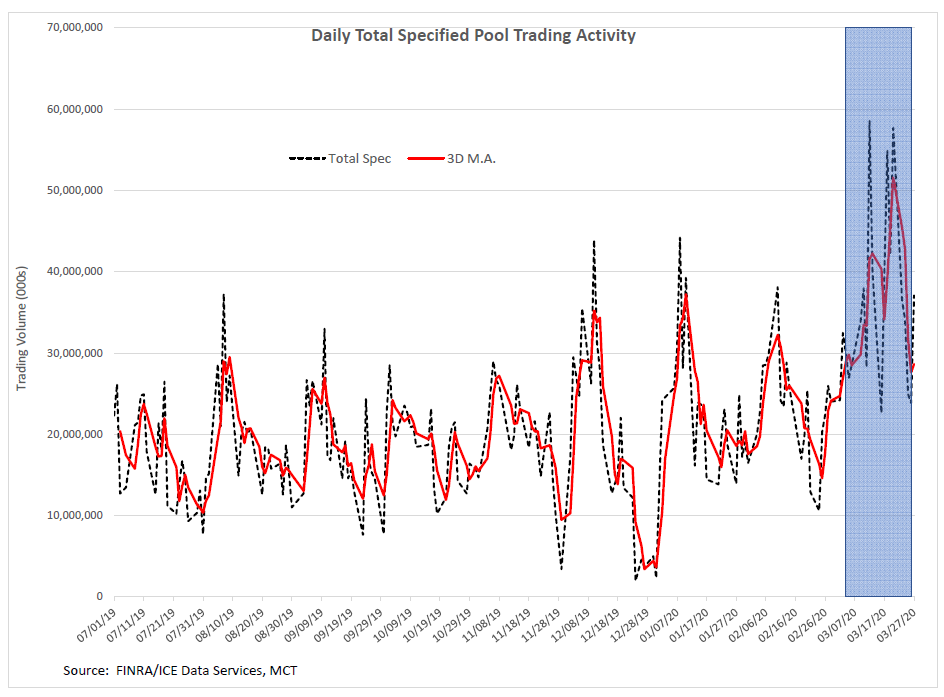