Treasury yields were lower week-over-week, but the apparently modest decline in yields does not begin to describe the volatility that the bond markets underwent last week.  The chart below, which shows hourly pricing for the 10-year note from 3/13 through 3/20, indicates that the note’s price traded as high as 108-14 (on Sunday night 3/15 in Asia) and as low as 102-03+ on Thursday morning, traversing roughly a 6 ¼ point range over the course of the week.  Not surprisingly, realized volatility continued to surge, with the 40-day daily realized vol on the 10-year closing last week at 12 basis points, triple what it was in mid-February. 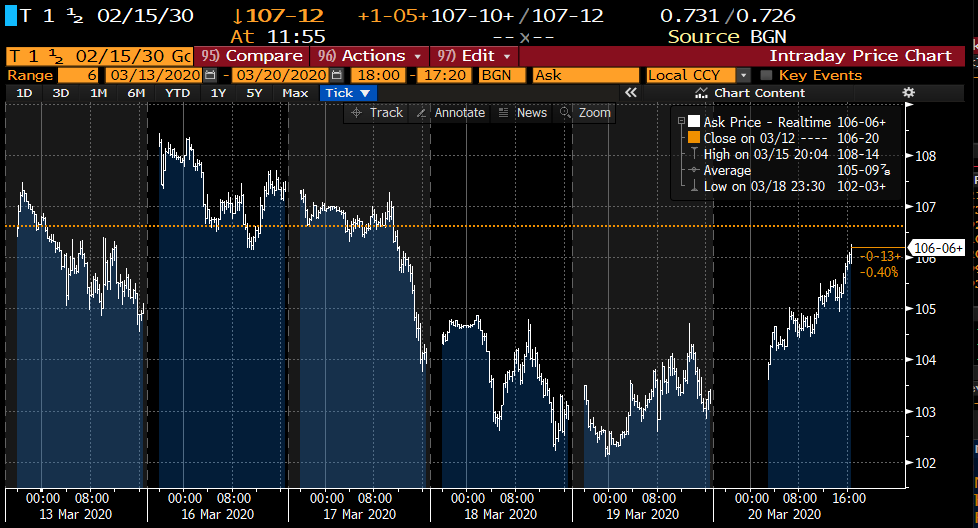 Click to enlarge MBS spreads ended the week wider versus Treasuries, but that also understates the volatility that spread products underwent last week.  On Thursday, MBS closed lower even as Treasury prices rose, and at one point on Friday UM30 2.5s were over a point lower at the same time the 10-year year was 1 ½ points higher; however, MBS recovered after the Fed announced large increases in how much MBS they would buy as part of the new QE program.  (This morning [3/23], the Fed announced a program of unlimited purchases of Treasuries while also increasing their MBS purchases this week to as much as $50 billion per day).  Bid/ask spreads have widened to reflect the illiquidity in the markets, while coupon swaps have narrowed or (for the GNII 3.5/3 swap) inverted, i.e., investors can buy GNII 3.5s at a lower price than GNII 3s, reflecting both liquidity considerations and fears of skyrocketing prepayments on Ginnie premiums.  Dollar rolls are trading special across most production coupons, reflecting heavy selling of MBS in the back months; this is a function of both the volume of loans in the pipelines as well as complications involved with closing loans in the face of a pandemic.

Mortgage rates have moderated, with the Freddie Mac survey rate reporting at 3.65%, 36 basis points over its all-time low reported on 3/5, which was consistent with a 10% decline in the MBA’s refi index.  Freddie Mac and Fannie Mae announced that they would treat Covid-19 in a similar fashion to programs outlined in 2017 for hurricane- and flooding-related disasters, allowing for loan forbearance of up to 12 months without reporting non-payments to credit bureaus.  It’s noteworthy that this national forbearance program does not appear to extend to government loans.  However, New York State announced a 90-day forbearance program for all loans; a link to the letter sent to all in-state servicers by the state’s Department of Financial Services is contained here.  This could portend financial troubles for smaller and/or poorly capitalized Ginnie servicers, since the financial burden of advancing against numerous loans (and being reimbursed over time, in most cases) could severely strain their financial resources.  (The MBA released a letter on Sunday to the Fed and the Treasury requesting that they “[D]evelop a liquidity facility to support the mortgage servicing sector in anticipation of widespread borrower payment forbearance.”  While the letter does not differentiate between products, it’s the opinion of many observers that Ginnie servicers are most vulnerable, given the different advancing rules for GSE and Ginnie servicing as well as the concentration of smaller non-bank servicers in the Ginnies sector.)

These concerns have also spilled over into MBS trading.  Specified pool trading has recently comprised a growing share of MBS trading volumes, reflecting fears of spiking prepayments; an average of $43 billion of specified pools changed hands on a daily basis last week, and Friday saw the highest percentage of specified trades relative to total volumes (20%) since we began tracking daily activity a couple of years ago.  However, we also heard of a Ginnie specified pool that was bid at a steep concession to TBAs, ostensibly due to concerns over the servicer’s financial condition, at a time when UM30 balance pools are trading at multi-point payups to TBAs.  This phenomenon reflects the odd structure of the Ginnie II market, where only multi-issuer pools are deliverable into TBAs; specified pools (by nature single-issuer pools) are traded as non-deliverable custom pools, and thus lack the option that traders have to deliver most conventional spec pools into TBAs.  (As a result, deliverable conventional specified pools never trade at a concession to TBAs; they would just be delivered into TBAs.)  Normally, concessions to TBAs for non-deliverable specified pools are seen in high-rate regimes where slower prepayments are a drag on returns.  (For example, lower-coupon conventional pools with LTVs above 105% generally trade behind TBAs even as fuller coupons trade to a payup.)  In this case, the inability to deliver a specified pool into a TBA forward led to a negative financial outcome for the originator, and raises a number of concerns, including a tiering of the specified pool market by servicer credit condition (as well as prepayment performance) and potential mark-to-market issues for lenders that use security pricing for their pipelines of small-balance government loans.

This also has additional ramifications to the future structure of the MBS markets.  In the FHFA’s recent proposal to push more production into multi-issuer pools, the agency cited the Ginnie II market as a future model for conventional MBS, with the bulk of loans securitized into TBA-deliverable multi-issuer pools while specified pools were pooled as single-issuer custom pools.  In our response to the proposal (available here), we expressed the opinion that the conventional TBA market was superior to the Ginnie II market, because most specified pool categories are deliverable into TBAs.  While we did not anticipate servicer credit being a factor in custom pool trading, this episode highlights the great value that the deliverability option can have in both high-rate regimes as well as periods of economic and financial stress.