Treasury yields ended another volatile week mixed, with yields on intermediate and long maturities rising while shorter maturity yields declined.  After bottoming out at 0.54% on Tuesday, the 10-year note eventually ended the week yielding 0.96%, although the latter part of the week saw intense intra-day volatility.  The rally in the short end of the curve, which pushed the 3mo/10yr spread wider by 40 basis points, likely reflected expectations of a sharp cut in the Fed Funds target rate by the Fed at the 3/18 meeting; the Fed ultimately jumped the gun with a rare (if not unprecedented) Sunday announcement of a return to a 0-25 basis point target.  The Fed also announced other measures, including a tepid return of a Treasury purchase program on Thursday and a larger program with the Sunday announcement.

The accompanying chart shows that the 40-day standard deviation of the 10-year note has roughly doubled over the past few weeks; while the level of volatility is not unprecedented the speed at which volatility has spiked is eye-catching. 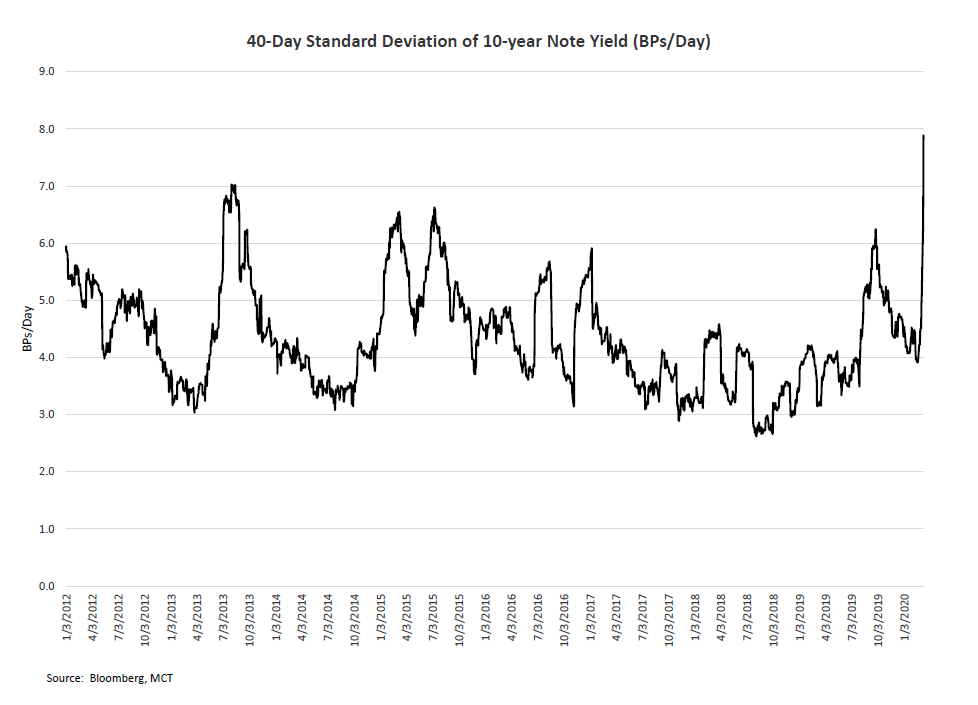 Click to enlarge (The measure, based on closing yields, also doesn’t take into account the 2-4 point intra-day moves in prices experienced last week.)

Coupon swaps mostly expanded, with the UM30 3/2.5 swap (which ended the prior week at 16/32s, a highly unusual 1x multiple) moving out by ¾ of a point.  UM30 2.5s now dominate trading activity, comprising in excess of 40% of all 30-year conventional activity; while there was some trading in Fannie 2s activity levels are small (less than $1 billion daily) and both pricing and liquidity remains erratic.  Bid/ask spreads across the sector were generally wider, and in some relatively illiquid coupons screen prices were unreliable.

The Fed’s Sunday surprise included a program to purchase at least $200 billion in MBS over the next few months, and will also continue to reinvest principal runoff in MBS.  (With the refi index more than doubling since the beginning of February, they should have a lot to reinvest.)  Aside from pushing MBS sharply tighter this morning (Monday 3/16), the Fed’s actions also put additional pressure on dollar rolls; traders are anticipating that the bulk of their purchases will be in the front month, while the deluge in supply is concentrated in May and later settlements.  Most notably, the Ginnie II 2.5 roll has moved out to an 11 ¾ tick offer, while even the UM30 2.5 roll is currently almost 4/32s special.