Yields around the world headed lower last week, as the powerful fixed income rally picked up steam.  The 10-year note ended the week at a new record low yield of 0.76%, dropping by about 38 basis points week/week.  The bond markets were boosted by a 50 basis point rate inter-meeting cut in the Fed Funds target, which sharply boosted pricing in the money markets, highlighted by a 78 basis point drop in the 3-month T-bill rate.  By Friday’s close, the Fed Funds futures market was projecting more than two rate cuts at the 3/18 meeting, while Monday’s oil-driven rally has pushed the futures market to project the possibility of the 0% target rate seen from last 2008 through 2015.

The MBS sector was in flux last week, as UM30 2.5s and 3s lagged their fast-shrinking hedge ratios by a cumulative three-quarters to seven-eighths of a point.  Notably, the UM30 3/2.5 swap collapsed to close at ½ point (a 1-1 coupon multiple) while fuller-coupon conventional swaps actually expanded.  The accompanying chart shows the UM30 3.0/2.5 swap along with the 10-year yield, highlighting the strong correlation that the swap has recently exhibited relative to intermediate Treasury yields. 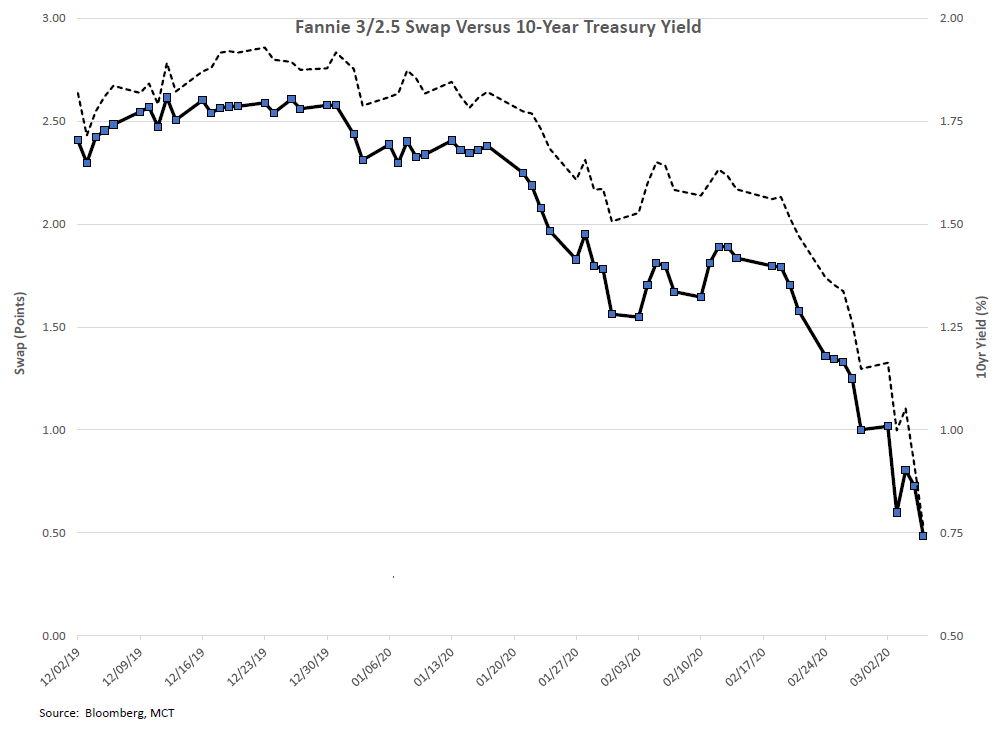 Click to enlarge  Ginnies had a decent week, in part reflecting their fairly beaten-down state, with most Ginnie/Fannie swaps improving modestly.  A fair number of rolls ended the week trading special, reflecting both expectations of a further decline in funding rates and, more importantly, a major surge in back-month supply.

Dealers began to trade Fannie 2s last week, and while the coupon remains illiquid trading volumes did pick up.  The table below show Tradeweb’s markets in the coupon on Friday at various times in the day, highlighting the thinness of the market. 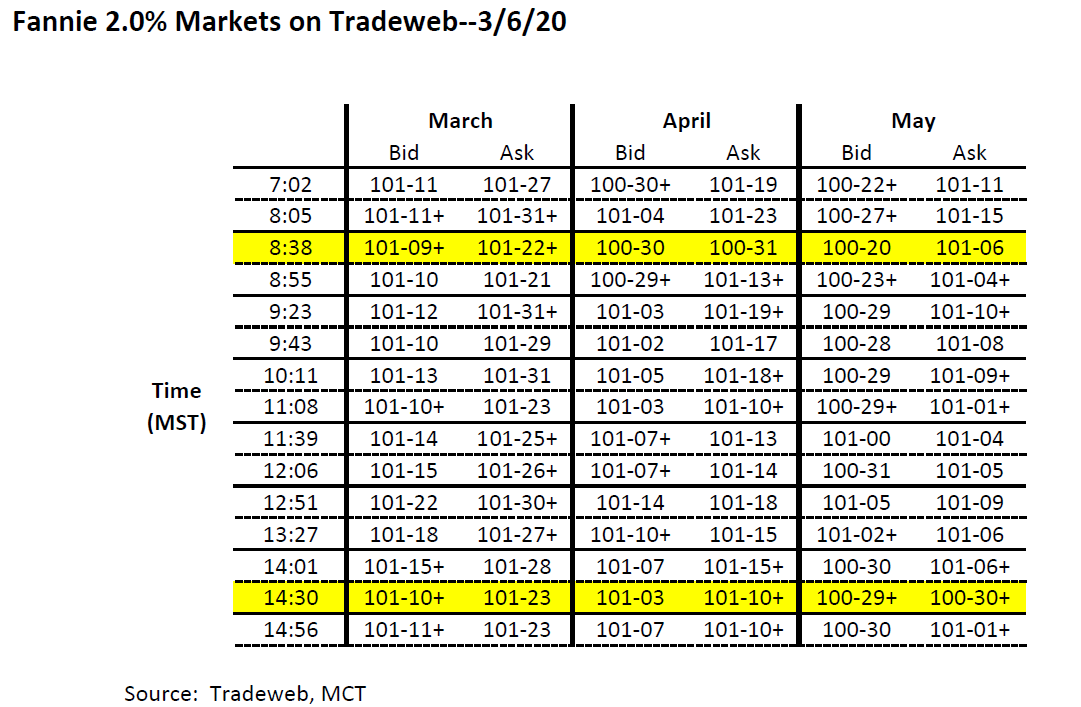 Click to enlarge Early in the session, for example, the April TBA was quoted in a 1-tick market while the March and May TBAs had bid/ask spreads of 13 and 18 ticks, respectively.  Later in the day, the March and April TBAs traded to wide markets while May had a 1/32nd bid/ask spread.   While it’s unclear exactly how many 2s are being traded, Bloomberg (which only shows a subset of TRACE volumes) indicated that just over $300mm Fannie 2s traded on Friday, versus trading of over $34 billion and $28 billion of Fannie 3s and 3.5s, respectively.  Liquidity will improve if and when daily volumes exceed around $5 billion, or roughly of 3% of total 30-year conventional volumes.