The financial markets ended an incredible week with Treasury yields reaching new lows.  The 10-year note at a yield of 1.15%, over 20 basis points lower than the previous low hit in the weeks after the 2016 Brexit vote.  The 3-month/10-year spread further inverted by about 8 basis points to close around -11 basis points, while the 2-year/10-year spread expanded by 12 basis points to +23, its widest level since early January of this year.

Depending on whose analysis you believe, the Fed Funds futures market is projecting either a 25 or 50 basis point cut in the target rate at the March 18th Open Market Committee meeting.  (As shown in the accompanying chart from the CME Group’s web site, their model projects a 50 basis point cut this month, to a target range of 1.0-1.25%.) 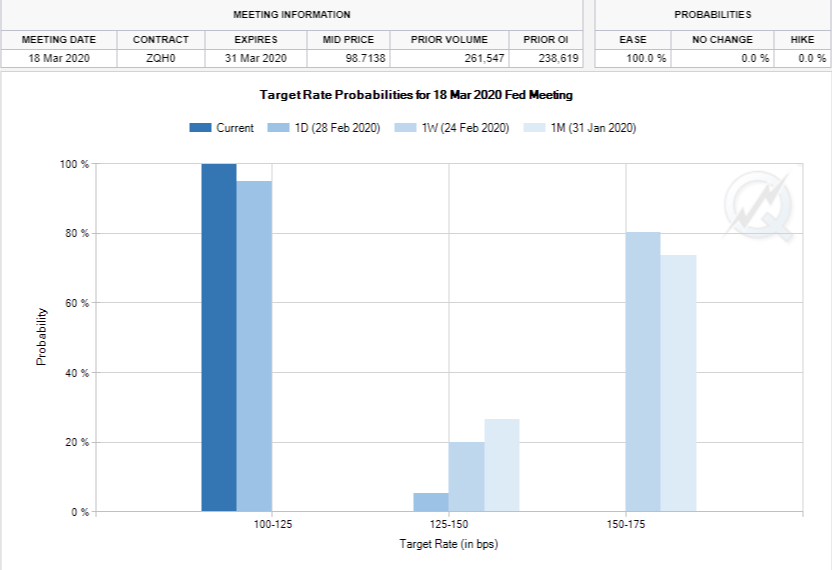 Click to Enlarge MBS lagged the Treasury rally for most of the week before rebounding on Friday, where they outperformed their Treasury hedge ratios.  Nonetheless, the sector mostly underperformed Treasuries over the last five sessions, although the performance of conventionals and Ginnies diverged. Premium UM30s (4s and higher) managed to track their (extremely short) hedge ratios, while same-coupon Ginnies trailed the 10-year note by as much as a quarter-point over the period.

The rally caused a reshuffling in coupon and product swaps.  The UM30 3/2.5 swap collapsed, closing tighter by 19/32s on the week, reflecting the weakness experienced by 3s, while fuller coupons narrowed mostly or (for the 4.5/4 swap) actually expanded by a tick.  By contrast, the entire Ginnie coupon stack was under pressure; while the GNII 3/2.5 swap narrowed by 14/32s, the GNII 4.5/4 swap contracted by 7/32s.  The collapse in coupon swaps has pushed best-execution for many note rates to their regulatory limits; for instance, many lenders are now slotting conventional loans with 3.625% note rates into UM30 2.5s.  (3.625% is the highest note rate that can be placed into a 2.5, given the 112.5 maximum spread between the loans’ note and coupon rates spelled out in last year’s Final Rule.)

Many dollar rolls have also pushed out, in part reflecting expectations for a drop in funding rates.  The UM30 2.5% and 3% rolls are trading special by more than a tick, while the GNII 3.5 roll (March/April) is trading as much as 2+ special, at the same time that the GNII 4 roll remains deeply negative, reflecting fears of a sharp jump in prepayments.

One critical question for many market participants is trying to peg market average lending rates.  The chart below shows a the 10-year yield compared to the Bankrate.com national average rate for 30-year conventional loans in February, along with the spread between the two rates.  While the chart shows that the Bankrate average barely budged, this arguably reflects weaknesses in Bankrate’s methodologies as much as the stickiness of MBS.  However, the other available rate benchmarks (from Freddie Mac and the MBA) are both dated; for example, the MBA survey rate published last Wednesday reflected rates for the week ending Friday 2/21. 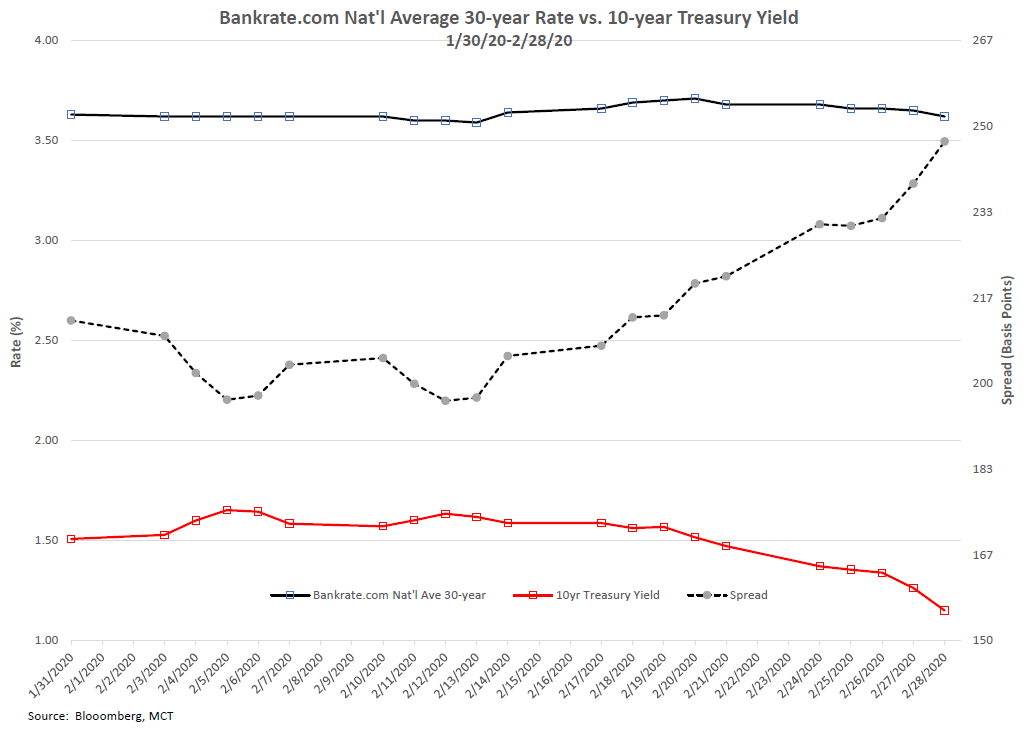 Click to Enlarge The chart below shows a scatterplot of the MBA’s 30-year conventional contract rate (which most recently reported at 3.73%) versus the 10-year note going back to 2011.  While a linear regression suggests that the fitted value should be in the area of 3.5-3.6%, the unprecedented level of the 10-year yield injects a note of caution.  However, an analysis of MCT’s client pipelines as of 2/27 suggests that 30-year conventional loans locked over the last 7 days had a weighted average rate of 3.58%, lending support to the notion that the current average level of 30-year conventional rates is in the area of 3.50-3.55%. 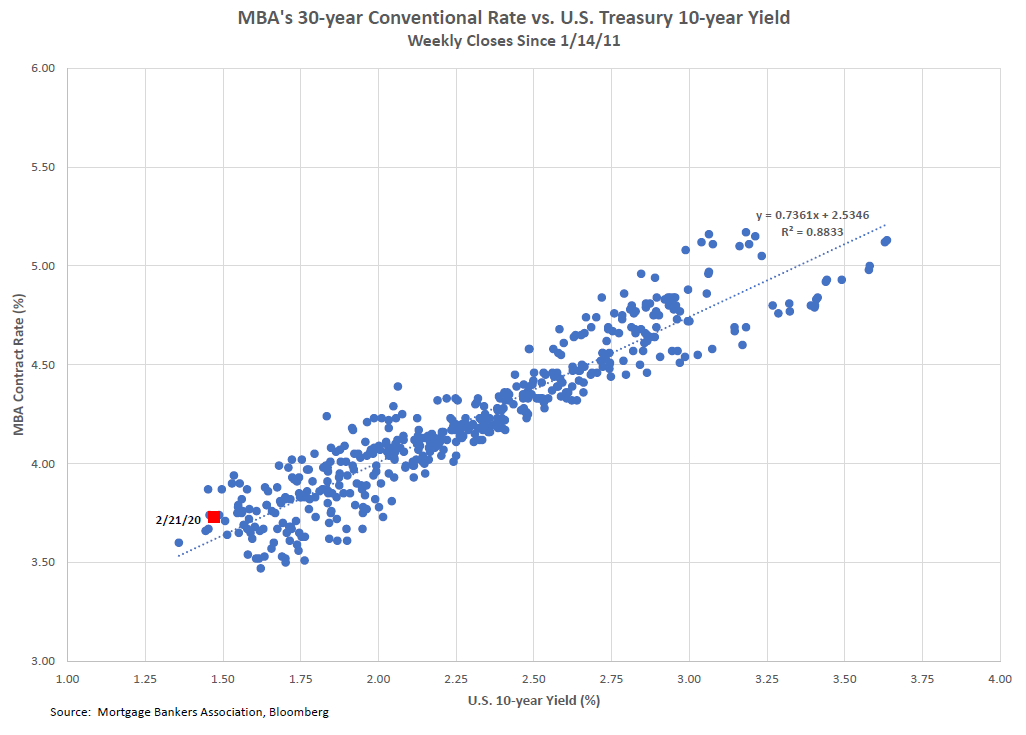 Good luck…please let us know if you’d like additional information or analysis.