Treasuries steadily rallied last week, with the 10-year note ending the week yielding 1.472%.  The drop in yields, triggered by fears that the coronavirus was spreading outside of Asia, was focused in intermediate and long maturities, and left the yield on the 30-year bond at an all-time low 1.915%.  The 2/10 year spread ended the week about 4 basis points flatter, while the 3mo/10 year spread inverted to close at -5 basis points.  The yield on the 10-year TIPS (reflecting the expected long-term real rate) declined by 6.5 basis points, while the TIPS breakeven level (a proxy for projected inflation) also dropped by about 5 bps.

Mortgages trailed their Treasury hedge ratios last week, although fuller coupons paradoxically outperformed as investors fixated on “burnout” (i.e., pools that have gone through a rally have already had the “hot” loans refinance, muting their prepayment speeds).  The 30-year Fannie current coupon spread over Treasuries widened by 3 basis points, as did the Ginnie current coupon spread.  Coupon swaps contracted, with the UM30 and Ginnie II 3/2.5 swaps narrowing by 10 and 8 ticks, respectively, while the Ginnie II/UM30 swaps also contracted; as discussed below, Ginnie prices have been under pressure since last fall.

Conventional rolls have had an interesting month.  The Fannie 4 roll, which had traded to a negative drop since the summer rally, suddenly spiked prior to February notification, trading as high as 12+ before settling at around 7/32s on February 10th.  Since then, the front-month Fannie 4 roll has traded slightly positive, despite the dollar price of Fannie 4s approaching the 105 level, as illustrated in the accompanying chart. 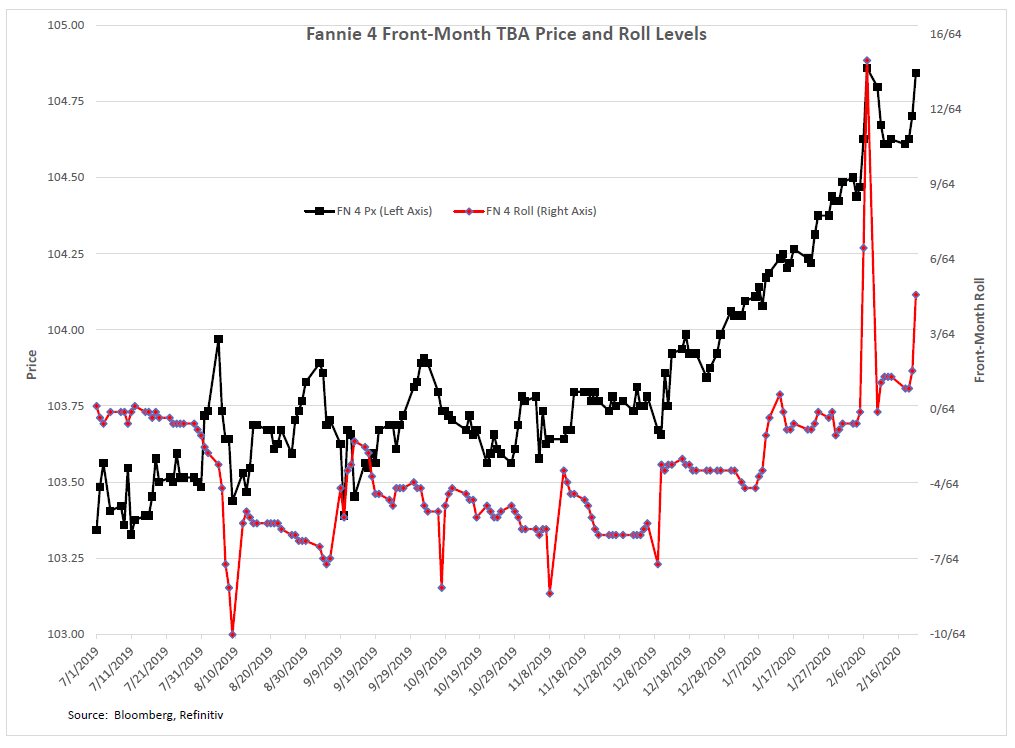 Click to enlarge At a 1/32 price drop and assuming a 1.75% cost of funds (consistent with where lower-coupon Fannies are rolling), the Fannie 4 roll is imputing a CPR of around 31% which, at current rate levels, is actually fairly slow, and consistent with the burnout story mentioned previously.  (By contrast, the Ginnie II 4% roll is trading at -5/32s, which reflects a prepayment assumption of about 60%.)

In fact, Ginnie prepayment speeds remain very quirky, with even lower coupons prepaying quickly and experiencing anomalous spikes.  The chart below shows the monthly CPRs after issuance for Ginnie II 3% multi-issuer pools issued between January of 2018 and August of last year, along with the average monthly speed for all of the pools. 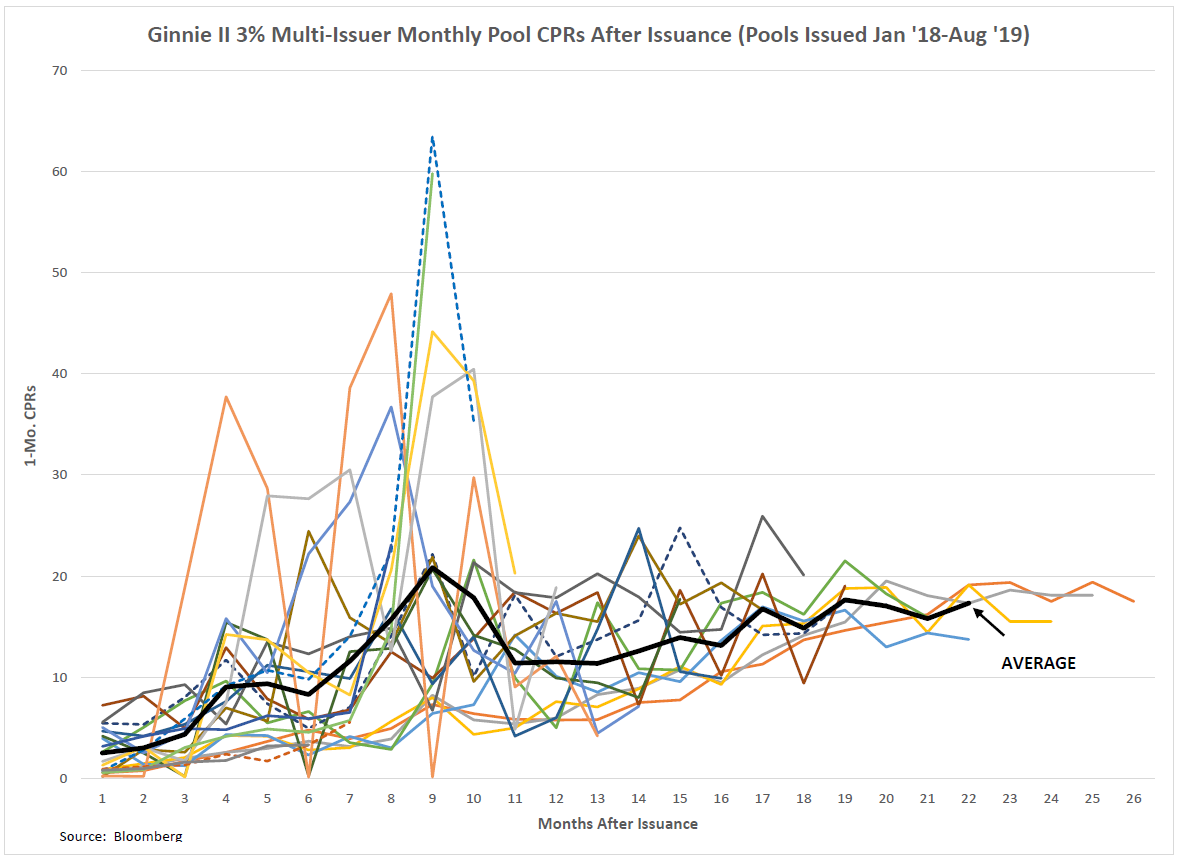 Click to enlarge In addition to being quite fast (with an average in excess of 15% CPR), a number of the pools showed prepayment spikes to almost 40% CPR and higher as soon as four months after issuance.  (Since the multi-issuer pools are generally in excess of $1 billion, the behavior did not result from a few loans paying off, as it would for smaller single-issuer pools.)

Fears of unpredictable prepayment behavior have weighed on the Ginnie Mae MBS market and, in turn, on government loan pricing.  The accompanying chart shows Ginnie II 3% TBA prices since the summer, along with the yield on the 10-year Treasury note (shown in reverse scale). 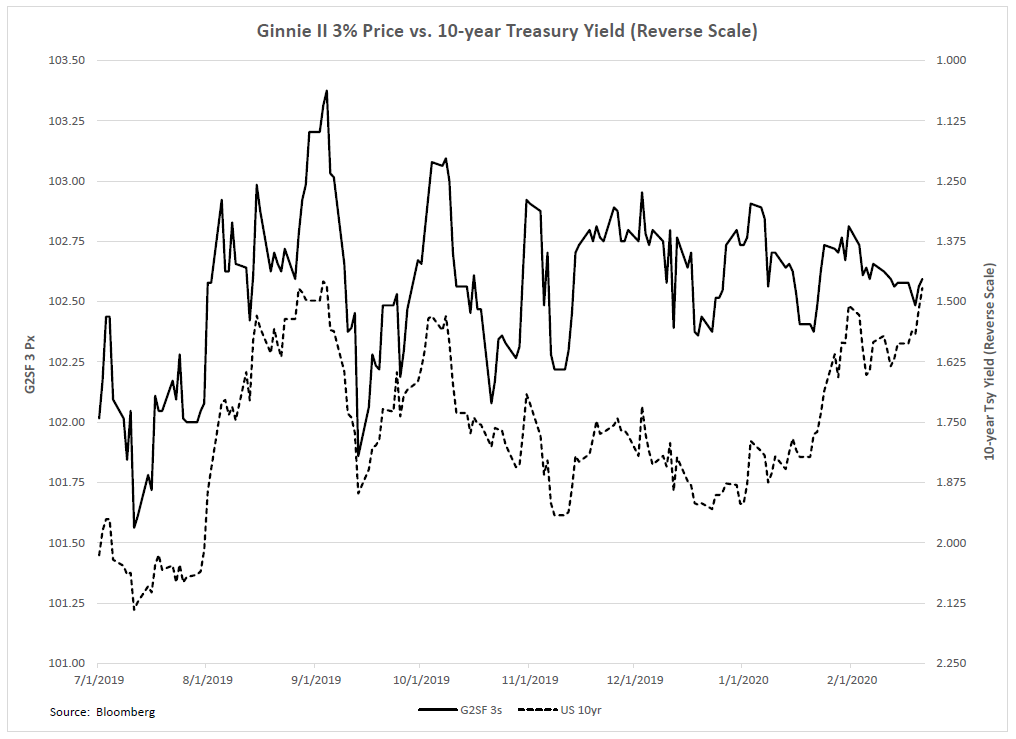 Click to enlarge The chart indicates that the price of Ginnie 3s has meandered since the beginning of the year, even though the yield on the Treasury dropped by almost 35 basis points over the same period.  This in turn is reflected in rates offered for government loans.  Despite the sharp drop in yields, the MBA survey’s contract rate for FHA loans, which last reported at 3.86%, is virtually unchanged from the beginning of the year, even as the 30-year conventional rate has declined by 14 basis points over the same period.