Treasury yields shot higher last week, rising by 25-35 basis points to leave the 10-year yield just inside of 1.90%.  The Treasury yield curve also steepened noticeably, as the 2-10 year spread widened by almost 8 basis points while the 2-5 year spread, while still negative, improved by about 6 basis points.  While other sovereign yields also moved higher, the selloff in US Treasuries was more pronounced; as an example, the spread between the US and German 10-year notes widened by about 20 basis points week/week.  Despite the selloff, the Fed Funds futures market continues to trade as if a cut in the target rate is a virtual certainty at the OMC meeting this week, with a projected 95% probability that the target range will move to 1.75-2.0%.

Last week’s price action in intermediate Treasuries left their 40-day trailing standard deviations, a key measure of market volatility, at their highest levels since the post-election selloff in late 2016.  As the accompanying chart indicates, the standard deviation for both the 5- and 10-year notes is around 6 basis points per day, up from around 3.25-3.5 bps at the beginning of June.  Pronounced spikes in volatility are never positive for the mortgage and MBS markets, and last week was no exception, as the spread between the conventional 30-year current coupon rate and interpolated 5-10 year Treasury yields gapped out by 12 basis points. 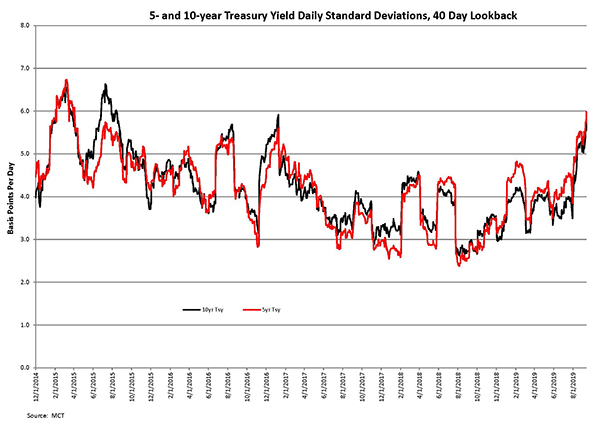 Although pipelines remain full and activity appears to be robust, mortgage market observers will be watching the MBA’s refi index closely to see how much of a damper the selloff and higher mortgage rates is putting on refinancing activity; while the index can be volatile (especially given the seasonal adjustments for the Labor Day holiday) a series of sub-2000 prints would indicate that the refi wave has run its course, at least until 30-year conventional mortgage rates move back to or below 3.5%. The broad selloff was also reflected in MBS coupon swaps, which pushed sharply wider week/week.  The UM30 3.5/3 swap, adjusted for dollar rolls, closed almost ¾ of a point wider to end the week at around 1.5 points.  While swap should widen in a selloff (as the lower coupons usually have greater durations) a look at the relationship between the swap and the 10-year yield (using data from the beginning of the summer) suggests that the relative weakness in the 3% coupon (vis a vis UM30 3.5s) is overdone by about a quarter of a point, as indicated by the chart below.  Other swaps, however, were better behaved, as both conventional and Ginnie 4/3.5 swaps only widened by 7 and 5 ticks, respectively.  Several rolls at trading at relatively rich levels, most notably the GNII 2.5 roll which, at around a 9+ offer, is trading more than a quarter point special.  (Traders are either delivering into or assigning September TBAs in order to avoid realizing the roll hit.) 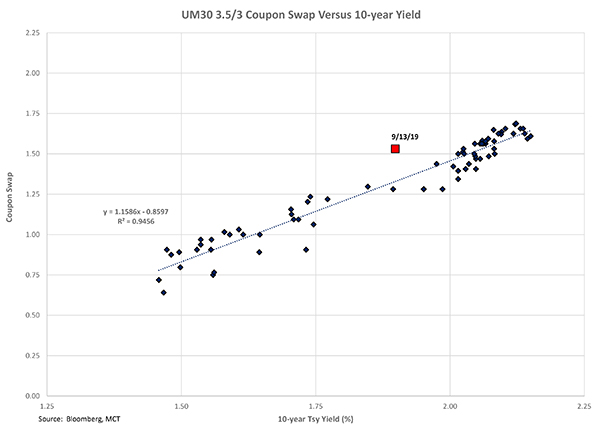 Interestingly, trading volumes in conventional 2.5%s have increased even as Treasury yields spiked and MBS prices moved sharply lower.  FINRA data shows that UM30 2.5s comprised about 14% of overall 30-year conventional trades last Friday, representing a steady increase over the 3.3% average for the first week of August, even as the 10-year yield was about 8 basis points lower.  (Daily volumes for 30-year conventional coupons are shown in the accompanying chart.) 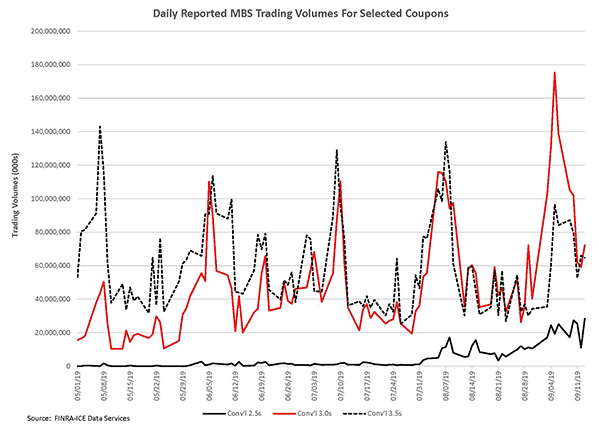 The relative performance of conventional 2.5%s has also improved, in that its pricing is more consistent relative to adjoining coupons.  For example, the first chart below shows the UM30 3.0/2.5 swap versus the 10-year yield from the beginning of June through last Friday.  Note that the swap during the first 30 or so observations was low relative to later periods, and a regression of the two values had a very poor fit.  (Generally speaking, an R-square of 0.217 suggests that only 21% of the variation can be explained by the regression.) 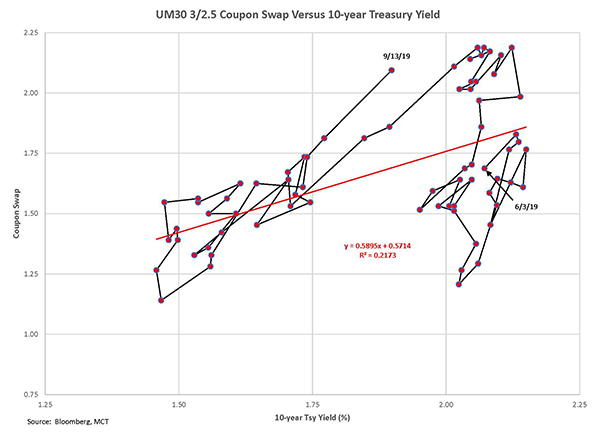 However, the second chart, which has a much better fit, shows the same two metrics but begins with data beginning on 7/12.  While normally a longer data series gives more useful analysis, in this case throwing out the earlier erratic data resulted in more consistent and reasonable results.  Although the swap remains slightly high relative to the fitted value, its levels appear much more rational and in line with Treasury yields, which means that the 2.5% coupon is trading more in line with the rest of the conventional 30-year market.  The results are also consistent with the uptick in trading and liquidity in the coupon; it suggests that traders are becoming more comfortable trading the coupon and using it as both a hedging and investment vehicle. 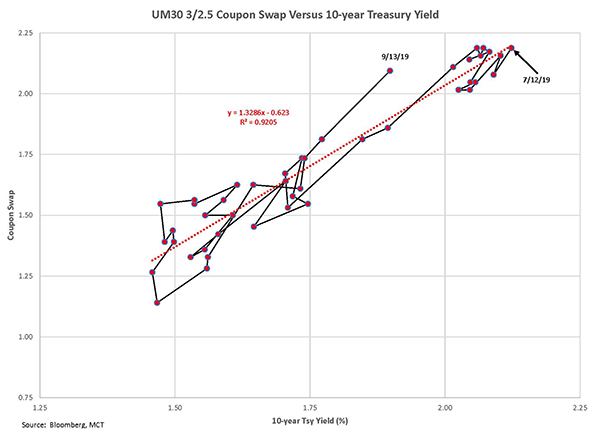